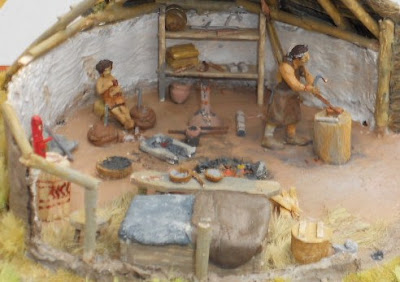 What i have finally understood is that the folk who maintained these documents were actually the tribe of metal workers.  That makes their presence near Lake Superior natural and certain and their ultimate move to essentially the tin mines of Cornwall also natural.

Steady decline in demand for copper ultimately forced their moves although we are certainly looking at a temporal arc that is at least two thousand years or those ninety generations.  What is unexpected is that they hung on in North America long past the Atlantean collapse likely trading with local tribes. Most mines would have been abandoned but it needs little to sustain a modest locale trade.

Their final move likely was triggered by contact with the Vikings through Hudson Bay and their  introduction to iron working.  They then surely moved the entire community to Cornwall to have access to ample tin and to pursue perhaps an ongoing copper trade...

If any who have joined in cause with you or become allies act treacherously, grant them no quarter.

Deal with them in such a way that their fate will be an example restraining others fi-om doing likewise. Never join cause with anyone proved treacherous or unreliable.

If any hold the same belief as you and have suffered for it, they are your brothers. Those who flght for the betterment of mankind or suffer for it, are your brothers. To surrender to the threats of those who demand you abandon your beliefs or ideals, is something which must not be done. Any man who has fought with you in battle is bound with you in the tie of blood and becomes even as your ovm kin.

Though you fight in the cause of Tmth and justice, be reluctant to commence the bloodshed and never do so if any other means, except cowardice or capitulation, lie open to your hand. If, however, you truly believe the foe will launch an attack, you are justified in getting in the first blow. You are answerable to your own soul. When battle is joined, you may slay the foe wherever you find him. Never acknowledge defeat and never submit meekly to domination. If the battle goes against you, withdraw to fight again. The live dog eats the dead bear.

Never fight among yourselves, for such quarrelling is worse than the bloodshed of battle. Differences and arguments among you are to be settled in an orderly and just manner, so that there is no severance or weakening among people. You are the People of the Light, the Law and the Book.

In the place of captivity men and women will be kept apart, for it is a place of requital and retribution. They will no longer be fi-ee, neither will they hold the rights of the fi-ee. They are to labour according to the judgement, but the labour of their hands is to be accounted to them. Each one must be used to get the greatest benefits fi-om their ability, and no one must be kept even one day over their requital.

These are the sayings of judges set down by the law scribes, and all that remains out of nearly eight hundred: We have learned that whatever a woman does she should not be cut off from her household, for this leads to other wrongs. If a wife be put aside for her wrongdoing it may be well to let her remain under the same roof without any rights of wifehood.

We have learned that not only are there women who are unworthy to be wives, but there are men unworthy to be husbands. If marriage remain open to such as these, those who sit in judgement are not unblameworthy for whatever follows. Therefore, man or woman may be forbidden marriage.

It is the law that adultery being a furtive deed done in deceit and betrayal, if man and woman are found in a position for adultery it would be as though they were caught committing it. This can lead to misjudgment.

Therefore, when no certainty of adultery can be seen and the woman can only be found to be indiscreet, she is not be dealt with as an adulteress. It is better for men to believe in the natural goodness of woman than otherwise. Yet when a woman has placed herself in a position where there can be no doubt, the husband may decide to keep her or not, but he must declare himself If he put her aside as a wife the judges will decree whether she go or stay. If she stay she may be bound to her husband, though no longer his wife.

We have learned that though adultery is a loathsome deed done in deceit while displaying a hypocritical allegiance to love, it is often not without preventable cause. Therefore, an adulteress can suffer a lesser punishment by being bound into the care of her husband while ceasing to be a wife, for she is unworthy. Then she is to remain within his household and submit to his direction. He must maintain and protect her and not allow her to wander. If she wander he may restrain her as he will. If she commit fornication while bound, the man who was her husband is not blameworthy, for she is under his restraint. The three must suffer their own punishments.

We have learned that the minds of men are like a maze and therefore the rights of marriage are to stand against all others and prevail at all times. All children bom within a marriage union are equal in rights. Their inheritance is not to be diminished, even though they be the offspring of adultery or incest, for the wrongdoing was not theirs. Such children should be received with mercy, for they are helpless and will repay in full with love and devotion.

His wife, excepting he commit adultery; his children, his clothes, his nightcovering, his weapons and his tools of craft.

We have learned that it is no longer necessary to forbid the eating of swine's flesh in this land and its eating is allowed, but the flesh of horse is not to beeaten except to prevent starvation.

We have learned that the soul departs with the last breath and whatever is done to the body does not affect the soul. Therefore, a body may be either buried or burned, but a high mound is not to be raised over the body or the ashes. Only husband and wife, parent and child, or brother and sister may be buried in the same grave within a graveyard. No one may be buried within his habitation.

THE LAST OF THE METAL PLATES

In the containers I have gathered together all the books given into my care and I have done all the things I was instructed to do, and the work of my father is now complete. The metal will stand the test of age and the cutting is the finest workmanship.

The Book of Magical Concoctions has six thousand eight hundred and ten words and this was the most difficult to remit, for it was a work of mystery and hidden things.

The Book of Songs and The Book of Creation and Destruction were not worked under my hand, but they are well constituted and will not perish. The Book of Tribulation was beaten under my eye and there are the books in The Great Book of The Sons of Fire which are not of my workmanship. I helped in part where the words were marked out and I struck them.

The Book of Secret Lore and The Book of Decrees are joined into The Great Book of The Sons of Fire and they, too, are enabled to last forever.

The metal is as our masters desired, made cunningly by the secret methods of our tribe and it will never perish. The marks are cut so that when seen to the right of the light they stand out clearly.

The bookboxes are of twinmetal founded with strength and turned with great heat, so that there is no joint where the ends come together. When closed and sealed water cannot enter.

When you read these things in times ahead, think of us who made the metal so imperishable and cut the words on it with such care and heavy labour, using such skill that in the years of rest they have not been eaten off.

Observe its brightness and wonder, for it will never tarnish.

We are the sons of The Sons of Fire, men so called because fire was necessary to their metalworking. Today we name our sons over the fire and forge, as they did, and each one of us belongs to the same fire.

Read carefully the sacred words which are written and may they be a lodemark to a greater life.

I, Efantiglan, and my father, attended to the making of these books and their covering containers.

Those who mixed the metal and worked it by forging and those who cut upon it are members of our tribe, and it is well made and will last forever.

Malgwin recorded these books before they were consigned to the future and the name by which they were called is The Living Book For The Living'.