Mars covered in toxic chemicals that can wipe out living organisms, tests reveal 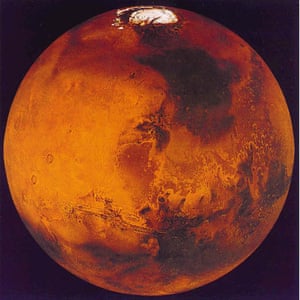 Unsurprisingly the planet needs a foot or two of water.  Pretty unlikely unless we impact a wet comet if such actually exists.

This is also likely on other planets with atmospheres and scant water.

Yet i do think that the planet has plenty of water deep down.  Sublimation has built up those ice caps from somewhere.

Mars covered in toxic chemicals that can wipe out living organisms, tests reveal


@iansample
The chances of anything coming from Mars have taken a downward turn with the finding that the surface of the red planet contains a “toxic cocktail” of chemicals that can wipe out living organisms.
Experiments with compounds found in the Martian soil show that they are turned into potent bactericides by the ultraviolet light that bathes the planet, effectively sterilising the upper layers of the dusty landscape.
The discovery has wide-ranging implications for the hunt for alien life on the fourth rock from the sun and suggests that missions will have to dig deep underground to find past or present life if it lurks there. The most hospitable environment may lie two or three metres beneath the surface where the soil and any organisms are shielded from intense radiation. “At those depths, it’s possible Martian life may survive,” said Jennifer Wadsworth, a postgraduate astrobiologist at Edinburgh University.
Wadsworth’s research was driven by the discovery of powerful oxidants known as perchlorates in the Martian soil some years back. Hints of perchlorates first showed up in tests performed by Nasa’s Viking lander missions 40 years ago, but were confirmed recently by the space agency’s Phoenix lander and Mars rover, Curiosity. In 2015, the Mars Reconnaissance Orbiter spotted signs of perchlorates in what appeared to be wet and briny streaks that seeped down Martian gullies and crater walls.
Many scientists suspected that perchlorates would be toxic for microbial Martians, but in theory at least, alien bacteria might find a way to use the chemicals as an energy source. If life could thrive in perchlorate-rich brines, then aliens might be thriving in the damp patches on Mars.
Working with Charles Cockell, an astrobiologist at Edinburgh, Wadsworth looked at what happened to Bacillus subtilis, a common soil bacterium and regular Earthly contaminant found on space probes, when it was mixed with magnesium perchlorate and blasted with ultraviolet rays similar to those witnessed on Mars. She found that the bugs were wiped out twice as fast when perchlorate was present. Other perchlorates found on Mars had a similar bactericidal effect.

Further tests found that the UV rays broke down the perchlorate into other chemicals, namely hypochlorite and chlorite, and it is these that appear to be so destructive to the bacteria.
The scientists followed-up with another round of experiments that looked at the toxic effects of iron oxides and hydrogen peroxide, which are also found in Martian soil. These tests yielded even more bad news for microscopic Martians: when the bacteria were hit with UV rays in the presence of perchlorates, iron oxide and peroxide, the bugs were killed 11 times faster than with perchlorates alone. Writing in Scientific Reports, the researchers say that the inhospitable conditions on Mars are caused by a “toxic cocktail of oxidants, iron oxides, perchlorates and UV irradiation.”
The findings mean that damp streaks on the Martian surface that have been spotted from orbit may not be prime spots to find alien microbes. The briny patches would be likely to concentrate perchlorates, making the streaks even more toxic than the surrounding soil.
“I can’t speak for life in the past,” said Wadsworth. “As far as present life, it doesn’t rule it out but probably means we should look for life underground where it’s shielded from the harsh radiation environment on the surface.”
Chris McKay, a planetary scientist at Nasa Ames Research Center in California, said the study was “a big step forward” in understanding the ramifications of finding high levels of perchlorate on Mars. From a Mars exploration point of view, he said the results were both good and bad news. On the plus side, it means that any microbes that hitch a ride on landers sent to Mars will be swiftly destroyed on the surface, alleviating concerns about contaminating a potentially inhabited planet. “This should greatly reduce planetary protection concerns as well as any concerns about infection of astronauts,” he said. “But the bad news is that this means we have to dig to quite some depth to reach a biological record of early life that is not completely destroyed by the reactive UV-activated perchlorates.”
In 2020, the European Space Agency plans to send its ExoMars rover to the red planet on a mission to search for alien life. The rover is equipped with a drill that can bore two metres into the ground to retrieve soil samples in which microscopic Martians may be found.

Andrew Coates, a planetary scientist at UCL who leads the ExoMars panoramic camera team, said the work shows that the surface of Mars today is more hostile to life than thought. “This, combined with the solar and galactic particle radiation environment at the Martian surface, makes it all the more important to sample underneath the surface in the search for biomarkers,” he said.