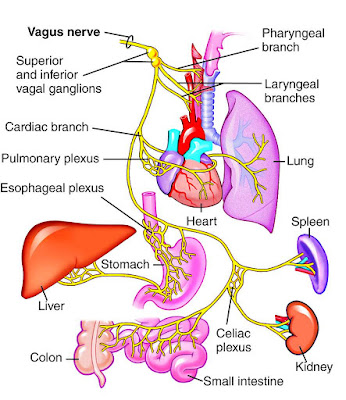 This is really good news and readily applied as well.

Considering how extensive the vagus nerve system is, it is possible that we can now do much more to avoid nerve damage.  The surgeon can see the event in real time and is no longer flying blind.


In a first-of-its-kind study, Mount Sinai researchers have discovered a novel technique to monitor laryngeal and vagus nerve function while patients are under anesthesia during otolaryngology and neurosurgery procedures. The findings, published in the July 2017 issue of Clinical Neurophysiology and featured on the cover, could save patients from vocal paralysis, maintain their swallowing function, and transform the way doctors perform surgeries.

Laryngeal nerve injuries following thyroid or anterior cervical spine surgeries affect approximately 10 percent of patients. To prevent these injuries, doctors typically monitor these nerves intermittently by stimulating them at various times through the procedure. But with intermittent monitoring, a possible nerve injury can be missed. Continuous stimulation allows doctors to see damage before it occurs and take preventative measures, but until now the only method of continuous monitoring has required doctors to place an electrode around the vagus nerve in the neck (this cranial nerve extends from the brainstem to the abdomen and helps supply voice and swallowing functions and control heart, lungs and digestion), which is invasive for the patient and can cause surgical complications.

Mount Sinai researchers recently developed a new, less invasive technique to continuously oversee the nerve function throughout thyroid procedures and cervical spine fusions. This novel technique relies solely on a special type of breathing or endotracheal tube, inserted by the anesthesiologist at the start of the surgical procedure. They use the tube to both stimulate and monitor nerve responses during the entire surgery, which has never been done before. This technique allows surgeons to see how different surgical maneuvers affect nerve function, and then change their approach to prevent post-surgical voice and swallowing complications resulting from nerve dysfunction during the procedure. According to their research results, this technique may improve patient outcomes and lower complication rates.

"This simple technique will likely have wide-reaching effects by greatly enhancing our ability to monitor the vagus nerve in the head and neck during neurosurgical and cardiothoracic surgeries. It requires no equipment other than a monitored breathing tube, and this type of tube is generally already used in most of these surgeries," said lead investigator Catherine Sinclair, MD, FRACS, Assistant Professor, Otolaryngology, Icahn School of Medicine at Mount Sinai. "Never before have we been able to monitor both sensory and motor branches of the vagus nerve. The ability to monitor sensory function for the first time is a huge breakthrough and will hopefully translate into improved patient outcomes."

Dr. Sinclair, along with fellow lead investigator Sedat Ulkatan, MD, Director of Intraoperative Neurophysiology, Mount Sinai West, and Maria Tellez, MD, a fellow in the Department of Intraoperative Neurophysiology, used this new technique on 15 patients in the Mount Sinai Health System. Fourteen of them underwent thyroidectomies, and one had a cervical spine fusion. During each procedure they used electrodes in one side of an endotracheal tube to send electrical stimulus through the superior laryngeal nerve to the brain stem, and the other side of the tube's electrodes to record the reflex responses in the vocal folds. They discovered that they could elicit a particular reflex in the brain previously thought to not exist in humans under general anesthesia. In turn, doctors could make immediate surgical modifications and adjustments during the procedures to prevent irreversible nerve damage. All 15 cases resulted in good outcomes.

"This is a non-invasive method for monitoring laryngeal nerve and vocal fold function that has been simplified to a placement of just one endotracheal tube, eliminating the necessity of invasive electrodes," said Dr. Ulkatan. "Surgery of the lower brain stem is still relatively conservative, given the critical functional role of this small area and the lack of reliable techniques to monitor these structures. This novel methodology will provide neurosurgeons important feedback to protect vagus nerve and lower brainstem structures, reducing life-threatening surgical complications."

About the Mount Sinai Health System

The Mount Sinai Health System is an integrated health system committed to providing distinguished care, conducting transformative research, and advancing biomedical education. Structured around seven hospital campuses and a single medical school, the Health System has an extensive ambulatory network and a range of inpatient and outpatient services -- from community-based facilities to tertiary and quaternary care.

The System includes approximately 7,100 primary and specialty care physicians; 12 joint-venture ambulatory surgery centers; more than 140 ambulatory practices throughout the five boroughs of New York City, Westchester, Long Island, and Florida; and 31 affiliated community health centers. Physicians are affiliated with the renowned Icahn School of Medicine at Mount Sinai, which is ranked among the highest in the nation in National Institutes of Health funding per investigator. The Mount Sinai Hospital is in the "Honor Roll" of best hospitals in America, ranked No. 15 nationally in the 2016-2017 "Best Hospitals" issue of U.S. News & World Report. The Mount Sinai Hospital is also ranked as one of the nation's top 20 hospitals in Geriatrics, Gastroenterology/GI Surgery, Cardiology/Heart Surgery, Diabetes/Endocrinology, Nephrology, Neurology/Neurosurgery, and Ear, Nose & Throat, and is in the top 50 in four other specialties. New York Eye and Ear Infirmary of Mount Sinai is ranked No. 10 nationally for Ophthalmology, while Mount Sinai Beth Israel, Mount Sinai St. Luke's, and Mount Sinai West are ranked regionally. Mount Sinai's Kravis Children's Hospital is ranked in seven out of ten pediatric specialties by U.S. News & World Report in "Best Children's Hospitals."

Disclaimer: AAAS and EurekAlert! are not responsible for the accuracy of news releases posted to EurekAlert! by contributing institutions or for the use of any information through the EurekAlert system.
Posted by arclein at 12:00 AM