Why Obama Won't Reach an Agreement With Iran 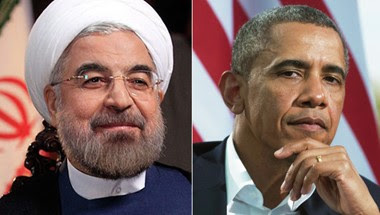 The argument of course is that they have everything that they can reasonably get or even want.  Maybe that is true, except that Iran has accepted a lot of pain for something that will never be needed..  It is possible that they do not understand that and it is possible that the build lobby made it happen as they have done in so many other places.
The enthusiasm for nuclear power and weapons has never made good sense and it has been fed by a industrial lobby that never gives up.  Somehow it is our pyramid construction program.  My point is that alternatives have always been available and right now superb alternatives exist that will drive the price of power much lower.  A bad economic case is about to become catastrophic.
So diplomatic stalemate is allowable.  We have done as much with North Korea.  Yet that example should inform the Iranians that real change mus occur.
.

Why Obama Won't Reach an Agreement With Iran


Everyone following the negotiations on Iran's nuclear program and the lifting of economic sanctions against the Islamic Republic agrees that the Obama administration would like to have an agreement with Iran. It would be in line with the real interests of the United States to be able to cooperate openly with Iran against the common enemy of Sunni terrorists of ISIL. And it would be the one major accomplishment in foreign affairs that Obama could cite in his two terms in office.


But the evidence suggests that the administration won't make the compromises with Iran necessary to get a comprehensive agreement. On one hand, the political and legal system of the United States has been so thoroughly reshaped over more than two decades by Israeli interests that the hoops Obama would have to jump through to lift sanctions against Iran would be far more politically demanding than what he had to do to lift sanctions against Cuba.


And on the other hand, despite its differences with Benjamin Netanyahu over the negotiations, the administration actually believes in the false narrative of covert Iranian nuclear weapons program and "nuclear deception" that Israel has long promoted. As the lead negotiator for the United States with Iran, Wendy Sherman (the protégé of the hardline anti-Iran and pro-Israeli Secretary of State Warren Christopher and the choice of Secretary of State Clinton to be Undersecretary of State) told a Congressional committee in October 2013, she didn't trust Iran, because, "we know deception is part of the DNA."


But an even more important, the evidence indicates that the administration feels that it has no incentives to reach an agreement with Iran, because it is getting most of what it wants already under the status quo.


Sometimes it is what is not asserted more than what is said that provides a crucial insight into official thinking. Secretary of State John Kerry said in explaining the extension, "We would be fools to walk away from a situation where the breakout time has already expanded rather than narrowed, and where the world is safer because this program." He was referring, of course, to the Joint Program of Action signed by the P5+1 and Iran in November 2013, which was supposed to provide a temporary bridge to the comprehensive agreement to follow.


In a sense, he was merely stating the obvious. He did not add, however, that without achieving a comprehensive agreement, the temporary gains would all be lost. That omission raised the obvious question whether the administration had begun to hope that it could use the JPOA as a device to keep the negotiations going until Iran finally had to go along US terms. The answer appears to be that the administration assumes that Iran will ultimately be forced to make the additional concessions Washington has been demanding – or that the talks will continue for another two years.


Politico's report on the decision to extend the talks elaborated on the administration's negotiating calculus. Administration officials, it said, "strongly dispute the idea that Kerry is wasting his time or that the extension amounts to a disappointment." The reason, they explained, was that Iran's nuclear program "is frozen in place" and "its growth capped by a November 2013 agreement that provided limited relief from international sanctions." The officials further argued that time was on the side of the US negotiators, "because continued economic sanctions are grinding away at Iran's economy."


The strategy suggested by that outline was clearly one of playing out the negotiations for as long as possible in the belief that Iran would ultimately be forced to accept the US demands on enrichment and abandon its own demands on the lifting of sanctions.


A similar strategy was suggested in a column the following day by Washington Post columnist David Ignatius, well–known for reflecting the thinking high-ranking national security officials to whom he has long had unparalleled access. Mirroring the view of the unnamed administration officials quoted by Politico, Ignatius said the economic pressure on Iran "seems to be working in tine West's favour," even though Iranian negotiators did not yet have the freedom to accept US terms.


He went further, however, likening the situation in the talks with Iran to a labour negotiation in which both labour and management find the option of breaking off the talks too costly, so they continue the negotiations "without a contract". Each side, Ignatius wrote, "for different reasons, seems to agree that for now, 'no deal is better than a bad deal'," as long as they "keep talking".


Kerry made a special point in his press availability of the fact that the United States was holding on to its ultimate card – the entire sanctions regime – until Iran agreed to US terms. "We will remove sanctions as the agreement is reached," he said.


Kerry was thus emphasizing what it views as the central fact of the negotiations: The United States can hold on to the gains from the JPOA while at the same time maintaining its bargaining leverage over Iran.


That posture depends on the perception that Iran cannot afford to walk away from the negotiating table. Six weeks before the November 24 cut-off date, the Obama administration State Department's non-proliferation official Robert Einhorn until January 2013, who had detailed the administration's thinking about the key negotiating issues earlier in the 2014, observed that the rollover strategy was available as an alternative to reaching agreement, because Iran would go along with it. "The option of simply throwing in the towel and calling it quits is not something that appeals to any of the parties," Einhorn told the Los Angeles Times. A few days later Einhorn pronounced the option of rolling over the negotiations


And even as early as December 2013, Gary Samore, who had been Obama's primary adviser on the Iran nuclear issue until he left the administration in January 2013, predicted at the Manama, Bahrain "regional security summit" that the most likely outcome of another six month of negotiations would not be yet be an actual comprehensive agreement but rather another "interim agreement". Even more significantly, Samore suggested, that what he called a "process of rolling interim agreements" could last through the remainder of Obama's term.


Samore is both Executive Director for Research at Harvard's Belfer Center on Science and International Affairs and President of the organization United Against Nuclear Iran, which takes positions on the Iran nuclear issue that reflect Israeli interests. So it is revealing that Samore was openly promoting an extension of the talks in October 2014, telling the New York Times, "[W]e would favour an extension because it keeps the nuclear program frozen."


The remarks by Samore and Einhorn strongly suggest that the Obama administration has a strong incentive to maintain its hard line demand for a major reduction in Iran's enrichment capabilities – a demand that Iran to which Iran is unlikely to accede. And that was before the collapse of oil prices, putting even more pressure on the Iranian economy, which makes the administration even more confident about it diplomatic posture. It is very difficult to imagine the administration rethinking its hard line unless and until Iran walks away from the negotiations at the end of the current extension and threatens to resume the development of its enrichment capabilities that it chose to freeze as a confidence-building measure.


Gareth Porter (@GarethPorter) is an independent investigative journalist and historian writing about US national security policy, and the recipient of the Gellhorn Prize for Journalism in 2012. His investigation of the US entry into war in Vietnam, Perils of Dominance: Imbalance of Power and the Road to War in Vietnam, was published by University of California Press in 2005.
Posted by arclein at 12:00 AM