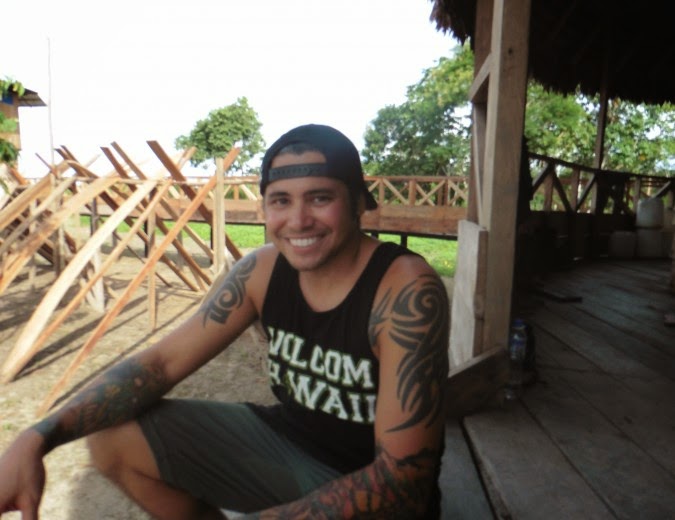 For years, Donnie’s life felt like a trap he couldn’t escape. He was living with overwhelming financial, personal, spiritual and emotional stress that felt impenetrable, despite his many efforts. Though it took struggles, heartache and plenty of time before he was able to face what he was going through, he said he realizes now that seeing combat in such a vivid fashion made him feel violated.

“It became very convoluted many, many times,” he said. “That’s a lot of what I struggled with, was that I felt duped. I felt violated. When I finally realized it, I felt like, I guess the way that a rape victim feels: their body was used for something that they didn’t want it to be.”

Today, thanks in great part to stumbling upon a TED Talk about ayahuasca, he is living symptom-free and full of a hopefulness that seeps out in his voice when he speaks. Here is his story.

War
When he returned from serving three tours overseas as a military medic, Donnie was in a state of denial. He’d joined the military at 17 as a way to earn a living while, he’d hoped, helping people. Growing up he lived in Nipomo, California where his father started out as a migrant farm worker before beginning a long career as a California state correctional officer in San Luis Obispo. It was the end of the Cold War, a patriotic time during which “Be all you can be,” army slogans abounded and cartoons like GI Joe: American Hero were popular on TV. Donnie picked up fast on the fact that his parents’ friends, who were most financially stable, were all military veterans, and by the end of high school he knew his path would include the army.

“I just wanted to go and serve and do something for myself, and make my parents proud,” he said. “I wanted to not only be a soldier; I wanted to be the smarter version of the soldier. In my mind I was going to find something where I could be on the frontlines but I could still help people. So, I became a medic.”

As it turned out, like many of his generation he was getting himself into much more than he’d bargained for. He joined up in 1999 — a time during which the U.S. was not involved in any active conflicts — thinking his longer life plan would be to work as a paramedic. What better way to get training than through the military? He graduated from the military paramedic training program at 19, just months before the September 11 terrorist attacks.

“At that time, an airborne ranger, I was maybe 115 pounds soaking wet,” he laughs. “I thought I had the world figured out. It just happened to be that I was in the wrong place or the right place, at the right time/wrong time — however you want to look at it. I graduated in January 2001. I get to my unit, which at the time was 3rd Ranger Battalion in Fort Benning, Georgia. I go there, kind of go through this rites of passage program where they accepts me in as a platoon medic.”

After the 9/11 attacks, Donnie was deployed as part of the U.S.-led war efforts in Iraq and Afghanistan. During his first tour he fought off of the USS Kitty Hawk and from an Airbase in Oman in support of Operation Enduring Freedom, conducting raids in Kandahar, Afghanistan. His second tour was also in Afghanistan. And his final tour was in Iraq via Saudi Arabia.

“I look at my son now, who is 14 and I go, ‘What the heck?'” he said. “‘A few years later, how could I ever send you off to war, to go fight somebody to die?’”
A Shaky Homecoming
When he returned home it was 2003. He was 22 years old, making ends meet selling real estate, and battling alcoholism as well as symptoms of PTSD.

“At the time I didn’t think I was battling anything,” he said. “I started going down this road of drinking all the time, riding the Harley, getting in fights, just being a dummy. At that time I thought that’s what it meant to be a vet. You talk about war stories and all that stuff. That’s what I thought it meant.”

Then, Donnie found out he was going to be a father, and some things changed. He decided to look for “the highest paying job” he could get with his experience — one with a medical plan. Over and over again the jobs that popped up were in law enforcement.

He became an officer in 2006 for the Lompoc Police Department. A few years years later he was promoted to the position of narcotics detective. He enjoyed being regarded as the heroic ex-Ranger by the other cops — for a while.

A Beautiful Thing
Just a few months after his ayahuasca experience, Donnie reached out to Reset, intent on sharing his story with a wider audience. He says the ayahuasca experience gave him all of the tools necessary to see how his life could be “without the negative thoughts that are sprung about by PTSD and its symptoms.”
“The feelings of PTSD always try to creep up, so it’s a constant battle,” he wrote in a message to Reset. “But by outlook is better than ever.”
He says ayahuasca was a rebirth more than it was a cure.
“It is so transformative, it’s almost watering it down to even talk about it, but the power that it has — there is something special in the jungle,” he said. “Ayahuasca has a way of increasing your tolerance for anxiety, by showing you how strong you are — by really pushing your limits of what you think that you can and can’t endure, because the prison is your own mind. You begin to open these rooms that the government says you’re not allowed to look into.”
Donnie and his father participated in the ceremony via a company called Pulse Ayahuasca Adventure Tours, which includes ecotourism activities — like fishing for piranha and taking ethno-botanical nature walks complete with sloths — along with nightly ayahuasca ceremonies guided by a shaman. They stayed for a week.
“Ayahuasca takes you to place where you’re reborn in a sense,” he said. “You feel like you’re a child and everything in the world is beautiful again. Everything is free of all the crap you’ve been putting in your head that tells you it’s bad.”
Now, Donnie is making it his life’s work to introduce more veterans, and people in general, about techniques that can reset consciousness for the better. Along with a friend and fellow vet, he is starting an advocacy organization called State of Flow to reeducate people about plant medicines like ayahuasca, martial arts and positive, healthy living in general.
“I feel like I just don’t want anybody to have to go through what I’ve been through,” he said. “[In combat] I was the person that had to see some of these faces, at the very end when people — when that glimmer in their eye went out — when they looked at me and they totally didn’t understand why it happened to them. I want to be somebody who dies at peace with what I’ve done in war. I don’t want to be somebody who is staring off in the distance, wondering, ‘What the hell just happened?’ I want to feel like I made a significant contribution.”
He said ayahuasca has helped him see this as possible.
Donnie points out that only about .05% of the population has actually experienced combat firsthand, so who better than those veterans to lead the charge against the war on psychedelics?
“We have an opportunity because people respect us as warriors; we have a special jump-to-the-front-of-the-line pass, if we want it,” he said. “Guys like me that are retired at 30, are still young enough to change the world. We’re still able-bodied. We still have the right mindset, if we can just get into it. We can lead the charge by saying, ‘Hey look, everybody knows universally that war is bad, and we’ve been victims of this war, and now we’re looking for answers.’ If enough of us get together and say, ‘[Psychedelics] are what helps us, we need to make them legal,’ if we start moving in that direction, I may not be the person or somebody else may not be the person, but maybe we may talk to the person that then does get that to happen.”
Posted by arclein at 12:00 AM