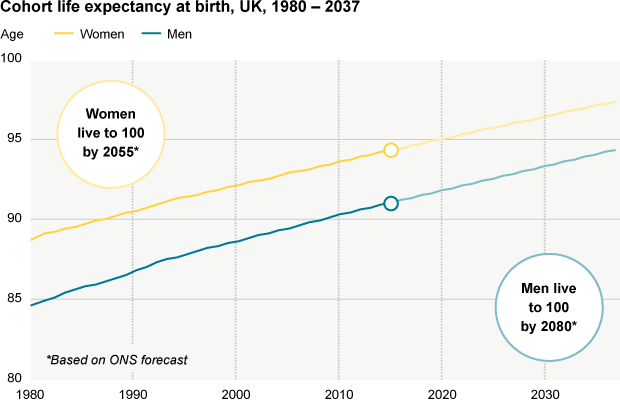 This is a remarkable claim and i hope is not  caused by blind linear extension.  Every other expectation is for running into a biological plateau.  So if we do things within a reasonable framework it is believable that the average will plateau between 85 and 90.
On the other hand biological remediation is also on the way over the next decade.  This could make this prediction work out.  We certainly see plenty of effort on the problem and serious success.  However such a change would need to take the maximum up over 125.
Way more important however, this will also demand restoration of physical strength.  Thus a hundred year old man will need to be robust as well. This also suggests that continuing education will become critical.
.
Average life expectancy heading for 100


Living beyond 100 will become the norm for children born within the next generation, official projections show.


According to estimates published by the Office for National Statistics the average life expectancy for newborn girls in the UK is on course to reach just under 97 years and four months within just over two decades.


Baby boys born in 2037 will expect to live until 94 years and four months on average – with many living much longer.


The projections, contained in a new report analysing the make-up of the British population, means that typical life expectancies would have increased by around a decade since the 1980s.


It is also now predicted that average life female expectancy will reach the once unimaginable milestone of 100 in 2057.The dramatic improvements in life expectancy, alongside mass immigration and a baby boom, have contributed to a surge in the population, which has grown by almost eight million since the 1980s.


But the ONS pointed out that people living longer will further add to the pressure on the NHS and care services.


“With life expectancy increasing, the UK’s population will age,” it explained in a commentary.


“This will affect a number of policy areas, including pensions and the health service – particularly because healthy life expectancy is not increasing as quickly.”
Posted by arclein at 12:00 AM