Prisoners of 'Ingenious' 1962 Alcatraz Escape Could Have Survived

The planning involved was substantial and we can be certain that they had someone waiting for them as well.  The mere fact that all three disappeared tells us that.  Even bodies would have shown up some how or the other as well.

The method described here is also something that could be thought out to a high degree of confidence in 1962.  Add in a pick up boat to avoid uncertainty and you have a plan that should work with or without a pickup as it had the backup of been able to get to land.

We forget that folks do disappear all the time by simply changing their identity.  The main rule is to never make contact with your past and avoid been investigated by the police who have the time to work through a false identity and the resources to discover who you are.

Still one would like to review the actual profiles of these guys to see if they were able to do this. They were all in their prime and likely no longer with parents to worry about.  Yet they all should have been family men so doing this properly becomes tricky.  That could be why the police think that they did not make it.

Prisoners of 'Ingenious' 1962 Alcatraz Escape Could Have Survived

If they had timed their escape just right, three prisoners who slipped out of Alcatraz more than 50 years ago on a raft made from raincoats would have had a chance of survival, new research shows.
Scientists who were studying the San Francisco Bay's strong tides reconstructed the possible routes of the audacious 1962 escape. The men might have been able to find shelter on an outcrop near the Golden Gate Bridge — that is, if they weren't swept out to sea first, according to the study.
From 1934 to 1963, during its time as a maximum high-security federal prison, Alcatraz hosted some of the 20th century's most notorious criminals, including gangsters Al Capone, Mickey Cohen and Whitey Bulger. The facility is perhaps most famous for its forbidding location, isolated on a rocky island in the middle of San Francisco Bay. [Photos: Hidden Fortress Beneath Alcatraz] 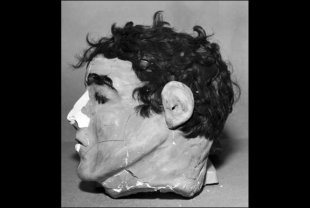 The inmates crafted dummy heads out of plaster and real hair to fool the guards on the night of the infamous e …In the three decades that Alcatraz was in operation, there were only 14 escape attempts involving 36 men, according to the FBI. Nearly all of the escapees were caught or died. But on the night of June 11, 1962, three inmates left Alcatraz in one of the most mysterious prison breaks in American history.
John Anglin, his brother Clarence Anglin and Frank Morris tucked dummy heads into their bed sheets and snuck into an unused utility corridor through holes they had crudely drilled through their cells. Then, from the prison roof, they shimmied down the bakery smoke stack and climbed over the fence. From the northeast shore of the island, they floated away from the prison on a small raft made from more than 50 stolen raincoats that were inflated with a musical instrument that was converted into a pump. Even the FBI still calls the plan "ingenious" on its website.
After a 17-year investigation, federal authorities concluded that the men most likely drowned during the escape, and the FBI maintains it has no credible evidence that the men are alive in the United States or overseas. But that official word has hardly stopped alternate theories from cropping up. The TV show "MythBusters" has tackled the escape, concluding that it's possible the three men could have paddled to safety.

A group of Dutch hydraulic experts recently decided to take a crack at the prison break while they were modeling San Francisco Bay to study flood risk and the impact of sea-level rise. The scientists simulated dozens of possible routes the inmates could have taken on the night of their escape.
"We didn't know exactly when the inmates launched their boats, or their precise starting point, and so we decided to release 50 'boats' every 30 minutes between 20:00 and 04:00 (11 p.m. and 4 a.m.) from a range of possible escape spots at Alcatraz to see where they would end up," Fedor Baart, a hydraulic engineer at the Netherlands-based research institute Deltares, said in a statement. "We added a paddling effect to the 'boats,' as we assumed the prisoners would paddle as they got closer to land."
If the three men left Alcatraz any earlier than 11:30 p.m., they would have been swept out to sea by strong currents, Baart and his colleagues found. But if the prisoners set off on their raft between 11:30 and midnight, it's likely that they could have landed just north of the Golden Gate Bridge, at Horseshoe Bay. The models also show that any debris after the landing might have drifted toward Angel Island, north of Alcatraz, which is where the FBI found a paddle and some personal items linked to the men.