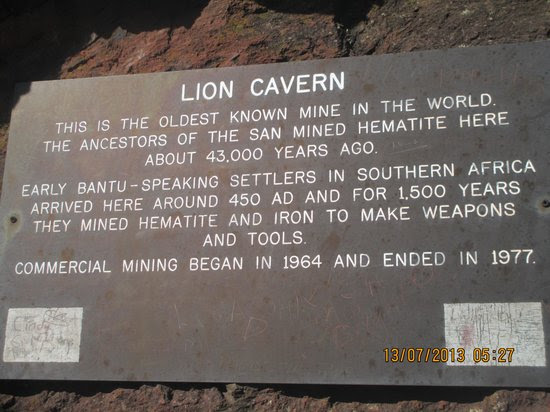 Curiously, I have no difficulty accepting these dates here.  This area saw the first true humans working themselves up beginning around 50,000 years ago.  Hematite and the associated minerals all worked for these early peoples.  They were not smelting and at best they worked free gold when possible.


Local claims may in fact be totally correct in assigning the mines to the Khoisan. These are peoples from those early times who have lived in an environment that did not bring newcomers easily.


We have observed that from other sources, the end of Eden occurred close by around 45,000 years ago.  Prior to that mankind had lived and worked to mine gold in South Africa from 200,000 BP to 45,000 BP.  At least that is what has been claimed from cultural sources.  We have filled in some of the blanks and established some of the how.  At least enough to avoid discounting the cultural claims.


Thus the survivors would be expected to mine resources easily enough and quickly.
.
The Edinburgh Geologist
Issue no 42

To mark the uploading of all the Strange Earth articles to the Edinburgh Geological society web site. I asked Bill to write another one or two. Here is Number 19...

The little man squeezed out from a crack in the rock and stood blinking in the bright African sun. As he snuffed out his makeshift wick light, another red stained miner popped out to join him. Together they turned and carefully blocked and then concealed the mine entrance. Satisfied that the entrance was not now easily visible to the casual observer they examined the material they had excavated and then packed away their tools and specimens. After a last look around they hoisted their leather sacks onto their shoulders and started to pick their way carefully down the hill. It had been a particularly good days collecting and they each had several fine specimens of the Specular Iron Ore they had been seeking. After a little while the path became easier and as they were approaching home they began to sing a popular little song of the time. The fact that the taller of the miners had realised one of his digging tools was left behind back in the mine was annoying him but he reasoned that they would find it the next time they went mineral hunting. Whether they went to the mine again we do not know, but they were wrong about the lost tooló it would be found by a Japanese sailor, nearly fifty thousand years later.

Iron ore in its various forms is a major mineral resource in Southern Africa. When Europeans first visited the area around Postmasburg in the Northern Cape around 1800 they found various sites where mining of red ochre and specularite had taken place. Local people such as the Tswana and Hottentots were familiar with these workings but mostly they attributed the tunnels and shafts to the 'old people', the Khoisan. Some of these tunnels extended over 100 metres underground and into areas where specularite was available. This mineral was more highly prized than either ochre or haematite and could be widely traded with other people who were not fortunate enough to have a source in their area. The mining operations showed a high degree of skill, knowledge and daring.

When prospecting operations were carried out in 1957 in an area known as the Bomvu Ridge in the Ngwenya massif of Swaziland they estimated some 30,000,000 tons of iron with a mean value of 60% metallic iron content. The Swaziland Iron Ore Devolopment Corporation decided to mine the ore body and production started in 1964. The ore was taken by rail to the port of Maputo in Mozambique and from there shipped to Japan.

During the mining so many ancient stone tools were found that the news reached the archaeologist Professor Raymond Dart in South Africa. Dart sent a knowledgeable colleague called Adrien Boshier to investigate these finds and report back. What Boshier found was amazing, specialised stone tools made of dolerite, which is not a local stone, had been left behind by the early miners. These choppers, picks and hammerstones were not just on the surface but also deep underground. It seems that these early miners removed at least 1,200 tons of soft haematite ore rich in specularite from one particular mine, Lion Cavern, alone. The question was how old were these mines? Archaeologist Peter Beaumont was producing evidence which suggested that these mines had been operated in the Iron Age, Late Stone Age and possibly even Middle Stone Age. However, hard evidence was still required in order to put a more precise date on the ancient mines. Then in 1967 charcoal nodules from some of the more ancient adits were sent to Yale and Groningen universities for Carbon 14 testing. The results that came back were astounding, dates of around 41,000 to 43,000 were obtained. Later from another early mine complex the buried skeleton of a child was dated at over 50,000 years.

By 1980 over 20,000,000 tons of high grade haematite had been removed and shipped to Japan and the mining operation was closed down. The mining company had left over a million tons of ore which underlie the ancient mining adit at Lion Cavern. This site is now listed as a national monument and can be visited if one is accompanied by a game ranger from the local Malolotja nature reserve.

If you want to read further, there are many sources including:

Boshier A. & Beaumont P.B., 1972. Mining in Southern Africa and the emergence of Modern Man, Optima, Johannesburg, 1972.

Bill Baird is well-known to Fellows, having been the author of many articles for this magazine, in particular the Strange Earth series, the first of which appeared in 1984. Bill was President of the Society towards the end of the last Millennium.
Posted by arclein at 12:00 AM