Scientists Zero in on How Lung Cancer Spreads 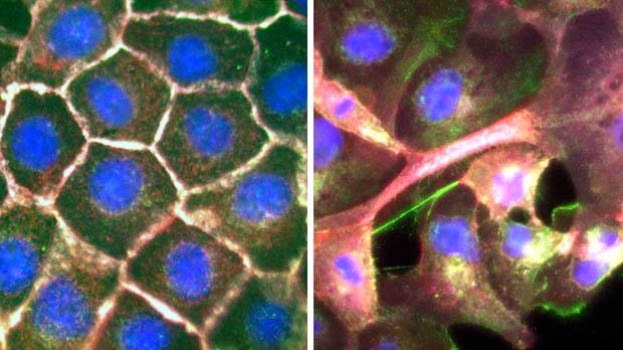 What amazes me is that we did not observe this a long time ago.  Lack of connectivity is apparent in all cancers generally as well.  That is why they look different in the first place.  They all lose something and it applies to structure and thus connectivity.

This will obviously assist in developing treatments.  So in its own way it is more good news on the cancer front.  Restoring this function may actually surprise us.

Is it possible that we are dealing with a biological efficiency?  That would certainly explain the observed disease profile.  I suspect that we are dealing with something other than vitamin C but you get the idea.  This really looks like a failure to heal followed by a cascade of further failures accelerating into a runaway problem.  I bring this up, not because it is a whole answer, but a plausible explanation for the biological profile itself independent of the direct cause.


Scientists zero in on how lung cancer spreads


Summary:          Scientists have taken microscopic images revealing that the protein ties tethering cells together are severed in lung cancer cells.

This image shows normal cells (left) compared to when the cell ties are broken down (right).

Scientists have taken microscopic images revealing that the protein ties tethering cells together are severed in lung cancer cells -- meaning they can break loose and spread, according to research published in Cell Reports December 24.

The researchers at the Cancer Research UK Manchester Institute discovered that the ties which lash cells together -- controlled by a protein called TIAM1 -- are chopped up when cell maintenance work goes wrong.


Healthy cells routinely scrap old cell parts so they can be broken down and used again. But this process spirals out of control in lung cancer cells, which scrap too many TIAM1 ties**.

Targeting this recycling process could stop lung cancer from spreading by keeping the cells stuck firmly together.

Lead researcher, Dr Angeliki Malliri, at the Cancer Research UK Manchester Institute at the University of Manchester, said: "This important research shows for the first time how lung cancer cells sever ties with their neighbours and start to spread around the body, by hijacking the cells' recycling process and sending it into overdrive. Targeting this flaw could help stop lung cancer from spreading."

Nell Barrie, Cancer Research UK's senior science information manager, said: "Lung cancer causes more than one in five of all cancer deaths in the UK and it's vital that we find effective new treatments to fight the disease and save more lives.

"Early-stage research like this is essential to find treatments which could one day block cancer spread -- which would be a game changer. It's also crucial that we find ways to diagnose the disease earlier, when treatment is more likely to be successful and the cancer is less likely to have spread."

Story Source:
The above story is based on materials provided by Cancer Research UK. Note: Materials may be edited for content and length.