This is an extremely important revelation.  We have effective multiple confirmation of carbon 14 dates that essentially overlaps full human presence on this planet from 200,000 BP through the present.  It is not just one anomaly either but a consistent finding for partially unpetrified bone and also apparently some petrified bone.

Now this may mean that our C - 14 theory is even less reliable than ever thought. Yet i do not think so at all.  After all we also have additional cultural evidence for triceratops at least into recent times.  Our best conjecture is that remnant populations survived right up to the Pleistocene Nonconformity 12900 years ago.  That also suggests that humanity hunted larger populations into near extinction during it first rise between 45,000 BP through 12900 Bp.  Obviously earlier fossils would be outside the C14 window and automatically date all rocks to the expected time frames of millions of years in the past.

Add in the pre Nonconformity low sea levels giving us the Sahul ( Australia - New Guinea  and sea floor ) as a natural continental sized Refugio that even today has evidence of Dinosaur Age survivals and this seriously works out.  Most scientist have not understood yet the implications of 12900 BP and this confronts them with impossible evidence which  has been simply ignored.   Now we will ignore ample repeatable carbon 14 data. .

Did Humans Walk the Earth with Dinosaurs? Triceratops Horn Dated to 33,500 Years

A Triceratops brow horn discovered in Dawson County, Montana, has been controversially dated to around 33,500 years, challenging the view that dinosaurs died out around 65 million years ago.  The finding radically suggests that early humans may have once walked the earth with the fearsome reptiles thousands of years ago.

The Triceratops brow horn was excavated by palaeontologist Otis Kline Jr, microscope scientist Mark Armitage, and microbiologist and avocational palaeontologist Kevin Anderson, in May 2012, and two horn samples (GDFM 12.001a and GDFM 12.001b) were given to the Glendive Dinosaur and Fossil Museum in Montana. The samples were then sent to the University of Georgia, Center for Applied Isotope Studies for Carbon-14 dating, which yielded an estimated date of 33,570 ± 120 years for the first sample and 41,010 ± 220 years for the second.

Triceratops, a name meaning “three-horned face”, is a genus of herbivorous ceratopsid dinosaur that is said to have first appeared during the late Maastrichtian stage of the late Cretaceous period, about 68 million years ago in what is now North America, and became extinct in the Cretaceous–Paleogene extinction event 66 million years ago. However, scientists from the Paleochronology Group, a team of consultants in geology, paleontology, chemistry, engineering, and education, who perform research relating to “anomalies of science”, maintain that dinosaurs did not die out millions of years ago and that there is substantial evidence that they were still alive as recently as 23,000 years ago.

Until recently, Carbon-14 dating was never used to test dinosaur bones, as the analysis is only reliable up to 55,000 years. Scientists never considered it worthwhile to run the test since it is generally believed that dinosaurs have been extinct for 65 million years, based on radiometric dating of the volcanic layers above or below fossils, a method which the Paleochronology Group states has “serious problems and gross assumptions must be made”.

"It became clear years ago that paleontologists were not just neglecting to test dinosaur bones for C-14 content but were refusing to. Normally a good scientist will be curious about the ages of important fossil bones,” Hugh Miller, a research and consulting chemist and Head of the Paleochronology Group, told Ancient Origins in an email.

The results of the Triceratops Horn analysis are not unique. According to Mr Miller, numerous C-14 tests have now been carried out on dinosaur bones, and surprisingly, they all returned results dating back in the thousands rather than millions of years.

“I organized the Paleochronology group in 2003 to fill a void with regards fossil wood and dinosaur bones as I was curious as to their age by  C-14 dating.  We thus have used C-14 dating to solve the mystery why soft tissue and dinosaur depictions exist world-wide. Our model predicted dinosaur bones would have significant C-14 and indeed they did in the range of 22,000 to 39,000 years BP,” Mr Miller added. 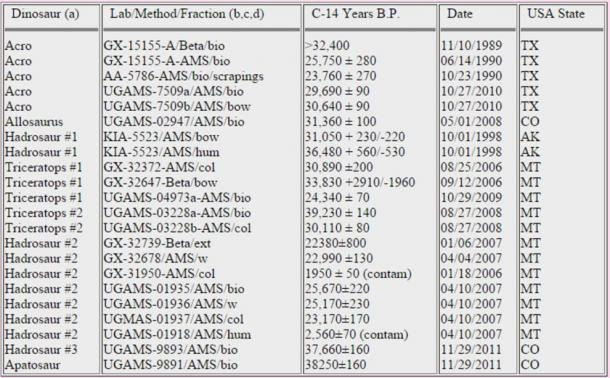 Results of C-14 tests on dinosaur bones provided by the Paleochronology Group.

Numerous independent researchers have long argued that there is evidence man and dinosaur once walked the Earth together, such as hundreds of ancient artworks and artifacts that appear to depict dinosaurs, long before modern science had pieced together dinosaur fossils and conducted analyses to produce detailed reconstructions of their appearance. 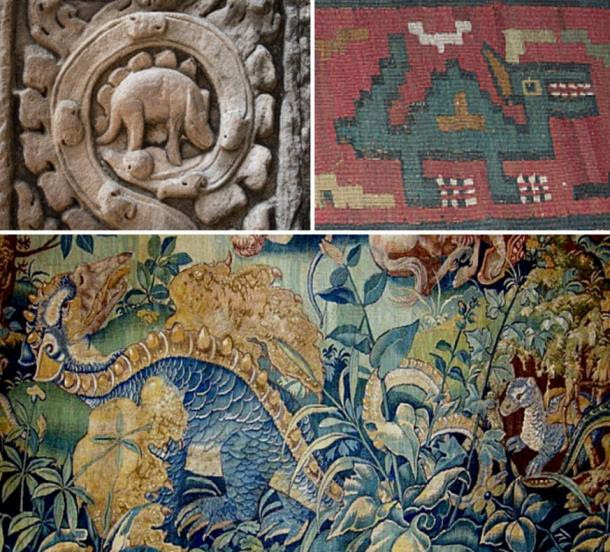 However, even more intriguing is the discovery of soft tissue in dinosaur fossils. In the March 2005 issue of Science, paleontologist Mary Schweitzer and her team announced the discovery of soft tissue inside a 68-million-year-old Tyrannosaurus rex leg bone from the Hell Creek Formation in Montana, a controversial finding considering scientists had thought soft tissue proteins degrade in less than 1 million years in the best of conditions. After recovery, the tissue was rehydrated by the science team and testing revealed evidence of intact structures such as blood vessels, bone matrix, and connective tissue.

More recently, Mark Armitage and Kevin Anderson published results of a microscopic analysis of soft tissue from a Triceratops horn in the peer-reviewed journal Acta Histochemica. Mr Armitage, a creationist, claimed that the preservation of cells is a scientific impossibility if the dinosaur really walked the Earth over 66 million years ago. On this basis, he opened a discussion with colleagues and students about the implications of such a finding being that the creationist perspective is correct and that dinosaurs existed much later than mainstream science maintains, a move that promptly saw him fired by the University of California.

While the Paleochronology Group says it is not “of any particular creed or denomination”, there are undoubtedly those with creationist beliefs among the group, a fact which critics may say could bias their results. Nevertheless, the group has urged any and all scientists to replicate their results by carrying out rigorous C-14 testing on any dinosaur sample.

“Every sample tested yielded significant original Carbon-14 by extensive cross-checking of their ages in bone collagen, bulk organics and carbonate from bone bioapatite on AMS units and obtained concordance.  Thus, the overwhelming  odds are that most if not all unpetrified or even supposed petrified dinosaur bones in museum and university collections will show the same result,” Mr Miller told Ancient Origins. “We urge therefore that all those in charge of such collections see if they can replicate our findings. The implications are immense.”

The challenge, so far, has been met with rejection, and previous attempts to publish C-14 test results were repeatedly blocked. Raw data without interpretation was blocked from presentation in conference proceedings by the 2009 North American Paleontological Convention, the American Geophysical Union in 2011 and 2012, the Geological Society of America in 2011 and 2012, and by the editors of various scientific journals.  The Center for Applied Isotope Studies at the University of Georgia, who conducted ‘blind’ C-14 tests on dinosaur bones, without knowing what they were, refused to conduct further C-14 tests after finding they were testing dinosaur bones.  Paleontologist Jack Horner, curator at Montana State University’s Museum of the Rockies, who excavated the Tyrannosaurus Rex remains that contained soft tissue, even turned down an offer of a $23,000 grant to carry out a C-14 test on the remains.

“[T]he public should be made aware that the discovery of soft tissue, C-14 in dinosaur bones and dinosaur depictions world-wild renders current beliefs about how old they are obsolete,” said Mr Miller. “Science is about sharing evidence, and letting the chips fall where they may.”

While there is a possibility that the C-14 test results were a result of contamination or error, (even though the results were replicated and rigorous pre-treatments were carried out by the University of California to control for this), or are perhaps due to some other factor not currently understood by science, it seems reasonable to expect scientists to attempt replication of such groundbreaking test results. Failure to investigate or even acknowledge such significant findings unfortunately suggests that some scientists are more interested in holding on tight to current perspectives, rather than seeking to advance knowledge and understanding in this field.

Featured image: Triceratops horn discovered in Dawson County, Montana, which yielded C-14 results of around 33,500 years.
Posted by arclein at 12:00 AM