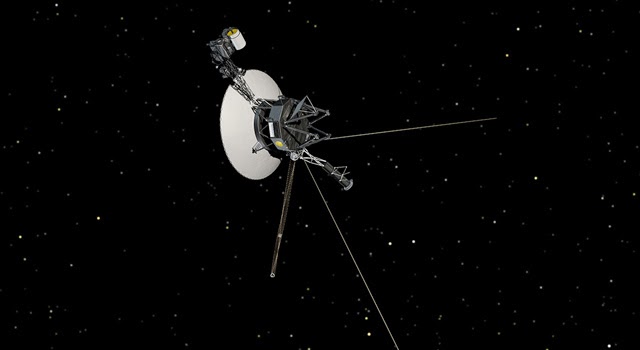 I do not think that this explanation will stand the test of time but it must do for now.   I suspect that we have now truly entered the real bow wave produced by our solar system and that this is steadily increasing the free electron count as well.  That the bow wave should form a multipeaked standing wave also feels right.

Yet this is all speculation until we send many probes in multiple directions and map it all.  My own expectation is that we are still within the solar system's 'Dark Matter' body which serves to shield free electrons.  Our motion then serves to help release such free electrons and produce a static charge.

Until we produce our own MFEVs also known as UFOs,  we really cannot get out there to properly investigate.  This is still some time away although all the tools are now under development and it could be much quicker.

"Most people would have thought the interstellar medium would have been smooth and quiet. But these shock waves seem to be more common than we thought," said Don Gurnett, professor of physics at the University of Iowa in Iowa City. Gurnett presented the new data Monday, Dec. 15 at the American Geophysical Union meeting in San Francisco.

The Voyager 1 spacecraft has experienced three "tsunami waves" in interstellar space. Listen to how these waves cause surrounding ionized matter to ring like a bell.

A "tsunami wave" occurs when the sun emits a coronal mass ejection, throwing out a magnetic cloud of plasma from its surface. This generates a wave of pressure. When the wave runs into the interstellar plasma -- the charged particles found in the space between the stars -- a shock wave results that perturbs the plasma.

"The tsunami causes the ionized gas that is out there to resonate -- "sing" or vibrate like a bell," said Ed Stone, project scientist for the Voyager mission based at California Institute of Technology in Pasadena.

This is the third shock wave that Voyager 1 has experienced. The first event was in October to November of 2012, and the second wave in April to May of 2013 revealed an even higher plasma density. Voyager 1 detected the most recent event in February, and it is still going on as of November data. The spacecraft has moved outward 250 million miles (400 million kilometers) during the third event.

"This remarkable event raises questions that will stimulate new studies of the nature of shocks in the interstellar medium," said Leonard Burlaga, astrophysicist emeritus at NASA Goddard Spaceflight Center in Greenbelt, Maryland, who analyzed the magnetic field data that were key to these results.

It is unclear to researchers what the unusual longevity of this particular wave may mean. They are also uncertain as to how fast the wave is moving or how broad a region it covers.

The second tsunami wave helped researchers determine in 2013 that Voyager 1 had left the heliosphere, the bubble created by the solar wind encompassing the sun and the planets in our solar system. Denser plasma "rings" at a higher frequency, and the medium that Voyager flew through, was 40 times denser than what had been previously measured. This was key to the conclusion that Voyager had entered a frontier where no spacecraft had gone before: interstellar space.

"The density of the plasma is higher the farther Voyager goes," Stone said. "Is that because the interstellar medium is denser as Voyager moves away from the heliosphere, or is it from the shock wave itself? We don't know yet."

Gurnett, principal investigator of the plasma wave instrument on Voyager, expects that such shock waves propagate far out into space, perhaps even to twice the distance between the sun and where the spacecraft is right now.

Voyager 1 and its twin, Voyager 2, were launched 16 days apart in 1977. Both spacecraft flew by Jupiter and Saturn. Voyager 2 also flew by Uranus and Neptune. Voyager 2, launched before Voyager 1, is the longest continuously operated spacecraft and is expected to enter interstellar space in a few years.

JPL, a division of Caltech, built the twin Voyager spacecraft and operates them for the Heliophysics Division within NASA's Science Mission Directorate in Washington.

For more information on the Voyager mission, visit http://voyager.jpl.nasa.gov
Posted by arclein at 12:00 AM