Is a Death Star Coming at Us? 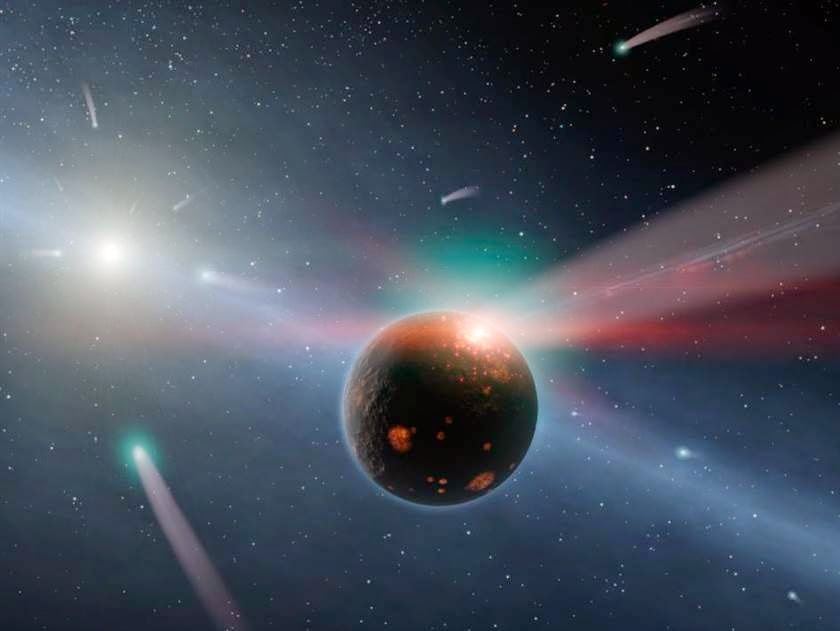 Not a terribly useful report but then we have lousy data anyway.  A hot invisible planet on an elliptic orbit could spoil things rather nicely and it would be not seen until it was close by.  The same holds true if we are orbiting Sirius as i suspect we do.

We know little about our orbit except we are traveling in the wrong direction and no one thinks this is important.   It happens to conveniently explain certain phenomena, not otherwise explained.

Either way we have a long time to wait and we well need it.
..
Is a Death Star Coming at Us? Study Says It's Possible, but Don't Panic
By Alan Boyle
http://www.nbcnews.com/science/space/death-star-coming-us-study-says-its-possible-dont-panic-n277741


A new study analyzing the motions of more than 50,000 stars has focused attention on one orange dwarf star known as HIP 85605 that has a chance of disrupting our solar system and sending a hail of killer comets our way.


Such threats, known as Nemesis or Death Star scenarios, have been the stuff of science fiction and serious astronomical studies for decades. But the latest study has reignited interest because it targets a particular star during a particular time frame, between 240,000 and 470,000 years from now.

Before you panic, take the word of a physicist who conducted a similar study several years ago: He says HIP 85605 is nothing to lose sleep over in the foreseeable future.


"It's important for astronomers to be leading the way in terms of identifying the risks that things in outer space may hold for us," Rider University's John Bochanski told NBC News on Wednesday. "But as for this particular star wiping out humanity? I would probably bet against it."


The latest study was conducted by Coryn Bailer-Jones of Germany's Max Planck Institute for Astronomy, and accepted for publication in the journal Astronomy & Astrophysics. He used Monte Carlo statistical simulations to analyze the galactic orbits of tens of thousands of stars tracked by the European Space Agency's Hipparchos satellite. Bailer-Jones wanted to find out how many of those stars could conceivably come within 2 parsecs (6.5 light-years) of our own sun.


The answer to the question was 42.


Out of those 42 alien suns, HIP 85605 appeared likely to have the closest encounter. Today the star is 4.9 parsecs (16 light-years) away, but hundreds of thousands of years from now, it's judged to have a 90 percent probability of passing through at a distance of 0.04 to 0.2 parsecs (767 billion to 3.8 trillion miles).

That may not sound all that close, but it's close enough to disrupt the vast repository of comets in the solar system's Oort Cloud, which is thought to extend about 0.5 parsecs (1.6 light-years) from the sun. "That would really tear it up, and I'm guessing you would have a pretty big comet shower, potentially pretty disastrous," Adrian Melott, a physicist at the University of Kansas, told NBC News.


Although it's hard to assess comet threats vs. asteroid threats, it's thought that comets have rained down destruction on our planet in the past. "It has been argued that as you go up in size in impacts, the bigger they are, the more likely they are to have been caused by a comet," Melott said. "The whole thing is fairly scary."

NASA / JPL-Caltech This artist's conception shows a storm of comets around a distant star known as Eta Corvi. NASA's Spitzer Space Telescope picked up evidence that such a barrage was hitting a planet orbiting Eta Corvi.


Astronomers say there's ample evidence that previous encounters with passing stars have shaped our solar system. For example, a close encounter of the stellar kind is one of the best ways to explain why potential dwarf planets such as Sedna and 2012 VP113 (known unofficially as Biden) circle the sun in weird, far-out orbits.


But even Bailer-Jones acknowledges that observational uncertainties and inaccuracies in the Hipparchos data could throw off his analysis. Other experts are even more circumspect.

"The predictions are quite reasonable, but I would say they have large error bars because of our imperfect knowledge of the parameters at this time," Melott said.


David Morrison, an astronomer who specializes in cosmic risk assessment at NASA's Ames Research Center, told NBC News in an email that Bailer-Jones' study was "really quite awesome," but he added a cautionary note: "I respect the many caveats about the inability with present data to make specific predictions. ... To me the message of this paper is the amount of data and computing power we now have, but not any specific prediction."


Bailer-Jones said the European Space Agency's Gaia probe, which was launched a year ago, should provide much more accurate data about the positions and velocities of the stellar passers-by. "In some sense, the paper is an advertisement for Gaia," Melott joked.

Cold comfort in the cosmos


Even if it turns out that a Death Star is coming toward us, there's comfort in the fact that we'll have at least 240,000 years to figure out what to do. We'd probably have even more time than that. "A comet shower from the Oort Cloud would get here a few hundred thousand to a few million years after the close encounter," Melott said.

Rider University's Bochanski, whose study focused on 18 stars from a different database, pointed out that Earth has been protected from cometary impacts by Jupiter's far greater gravitational effect, which tends to suck in comets like a vacuum cleaner. The giant planet's comet-catching capability was in full view in 1994 when Comet Shoemaker-Levy 9 slammed into the Jovian atmosphere.


"If I were a gambling man, I would bet that we'd still be safe, or that a comet shower caused by this star would not be the reason why we're not around," Bochanski said. "Global warming or a world war would probably knock us out a lot sooner than that."


Melott said our current existence is the best evidence that Earth would survive a Nemesis comet storm.


"For any slice of time over the past 500 million years, you'd expect there to be mostly the same number of close encounters, and there's still life on Earth," he told NBC News. "So however bad this is, generally, it doesn't look lethal. There have been a lot of mass extinctions, and some fraction of them could have been due to comet impacts ... but it wasn't the end of the world."
Posted by arclein at 12:00 AM

'The answer to this question was 42'

A karmic warning of stark life and death coming our way.