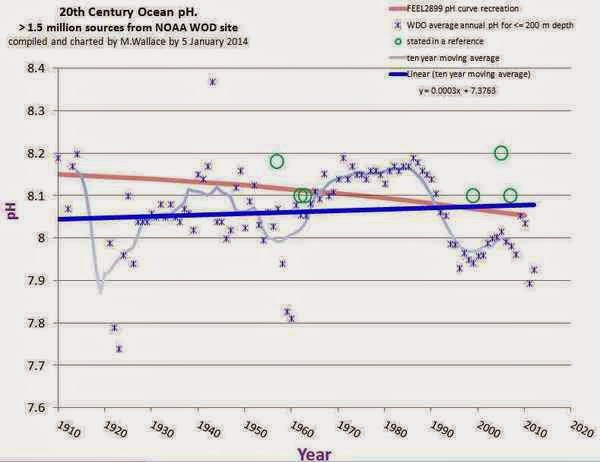 I had never tackled this issue, but it was certainly outstanding and seriously suspect simply because unusual claims were been made. I will add it to the sea level claim and the rising global temperature conjecture that have both been refuted by document review and by the march of time.

Once again awful science is put up to argue the case and we have this story that even shows the same efforts to suppress dissent.

This item actually completely removes all the proposed supports for the whole global warming conjecture linkage to rising CO2. I might add that the Mauna Loa CO2 curve also needs to be better understood because it is unique, it is in the unusual CO2 rich band in the Southern hemisphere that has been determined by satellite and we do not understand any possible local components which could be smoke stacks in Indonesia.

I no longer trust Mauna Loa as a global proxy and that is bad because we really lack an alternative that can be trusted. .

A startling discovery by a graduate student has uncovered what looks like a fraud remarkably parallel to the infamous “Hockey stick” graph of Michael Mann that purported to show global temperatures skyrocketing when atmospheric CO2 rose, but only did so because “hide the decline” was the operating principle in selecting data. For those who have not been keeping up with the alarmist follies, alleged ocean acidification has joined and supplemented the rapidly-fading alleged global warming threat as an urgent reason to stop emitting CO2, and hand money and power over to regulators who would control the production of energy, the very basis of modern life.

The theory is that adding atmospheric CO2 leads to the acidification of the world’s oceans, and this profoundly alters the ecosystem, endangering sea life. As Marita Noon of CFACT.org, who first publicized the discovery of the suspected fraud, writes:

“Ocean acidification” (OA) is receiving growing attention. While someone who doesn’t follow climate change science might think OA is a stomach condition resulting from eating bad seafood, OA is claimed to be a phenomenon that will destroy ocean life—all due to mankind’s use of fossil fuels. It is a foundational theory upon which the global warming/climate change narrative is built.

The science and engineering website Quest recently posted: “Since the Industrial Revolution in the late 1700s, we have been mining and burning coal, oil, and natural gas for energy and transportation. These processes release carbon dioxide (CO2) into the atmosphere. It is well established that the rising level of CO2 in our atmosphere is a major cause of global warming. However, the increase in CO2 is also causing changes to the chemistry of the ocean. The ocean absorbs some of the excess atmospheric CO2, which causes what scientists call ocean acidification. And ocean acidification could have major impacts on marine life.”

Within the Quest text is a link to a chart by Dr. Richard A. Feely, who is a senior scientist with the Pacific Marine Environmental Laboratory (PMEL)—which is part of the National Oceanic and Atmospheric Administration (NOAA). Feely’s climate-crisis views are widely used to support the narrative.


Here is the chart, via the Quest post, that Feely published that won him the big bucks and appeared to make the case that WE ARE DOOMED! If we don’t cut back on hydrocarbons, even if the global warming has morphed into climate change.

Looks pretty scary, right? Things were going great for the doomster, at least until a graduate student at the University of New Mexico started asking questions about it. Watts Up with That and James Delingpole of Breitbart both have explained the detective work of one Mike Wallace, a PhD candidate. Delingpole writes:

While studying a chart produced by Feely and Sabine, apparently showing a strong correlation between rising atmospheric CO2 levels and falling oceanic pH levels, Wallace noticed that some key information had been omitted.

Mysteriously, the chart [the one above]only began in 1988. But Wallace knew for a fact that there were oceanic pH measurements dating back to at least 100 years earlier and was puzzled that this solid data had been ignored, in favour of computer modelled projections.


So Wallace did what any scientist interested in the truth would do:

When Wallace emailed his query to Feely and Sabine, however, he found them less than helpful.

Sabine replied that it was inappropriate for Wallace to impugn the “motives or quality of our science” and warned that if he continued in this manner “you will not last long in your career.” Having provided Wallace with a few links – all of which turned out to be useless – he concluded his email by saying “I hope you will refrain from contacting me again.”


Note that it is a basic methodology of science that data leading to conclusions should be shared, to allow others to analyze it. The use of threats to the career of a person asking questions is a tell.

In an effort to obtain access to the records Feely/Sabine didn’t want to provide, Wallace filed a Freedom of Information Act (FOIA) request.

In a May 25, 2013 email, Wallace offers some statements, which he asks Feely/Sabine to confirm:

“…it is possible that Dr. Sabine WAS partially responsive to my request. That could only be possible however, if only data from 1989 and later was used to develop the 20th century portion of the subject curve.”

“…it’s possible that Dr. Feely also WAS partially responsive to my request. Yet again, this could not be possible unless the measurement data used to define 20th Century ocean pH for their curve, came exclusively from 1989 and later (thereby omitting 80 previous years of ocean pH 20th century measurement data, which is the very data I’m hoping to find).”


Sabine writes: “Your statements in italics are essentially correct.” He adds: “The rest of the curve you are trying to reproduce is from a modeling study that Dr. Feely has already provided and referenced in the publication.”

In his last e-mail exchange, Wallace offers to close out the FOIA because the e-mail string “clarified that your subject paper (and especially the ‘History’ segment of the associated time series pH curve) did not rely upon either data or other contemporary representations for global ocean pH over the period of time between the first decade of 1900 (when the pH metric was first devised, and ocean pH values likely were first instrumentally measured and recorded) through and up to just before 1988.” Wallace received no reply, but the FOIA was closed in July 2013 with a “no document found” response.


It looks to me as though some posterior-covering was underway:

Interestingly, in this same general timeframe, NOAA reissued its World Ocean Database. Wallace was then able to extract the instrumental records he sought and turned the GEPH data into a meaningful time series chart, which reveals that the oceans are not acidifying. (For another day, Wallace found that the levels coincide with the Pacific Decadal Oscillation.) As Wallace emphasized: “there is no global acidification trend.”

“In whose professional world,” Wallace asks, “is it acceptable to omit the majority of the data and also to not disclose the omission to any other soul or Congressional body?”


Here is the chart that Wallace produced, using the data that was omitted from the alarmist graph:

Wallace summarizes what is at stake:

“Ocean acidification may seem like a minor issue to some, but besides being wrong, it is a crucial leg to the entire narrative of ‘human-influenced climate change.’ By urging our leaders in science and policy to finally disclose and correct these omissions, you will be helping to bring honesty, transparency, and accountability back where it is most sorely needed.”


This ought to be the subject of congressional hearings next year.

Your synopsis is appreciated. Noted at Care2.com

Want to see the corrected graph