Why Roman Concrete Has Endured 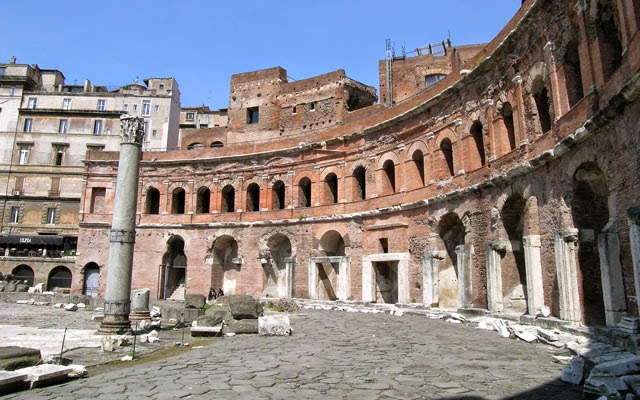 This was an open question that should have been answered a long time ago. It has been staring us in the face for two thousand years. We use stronger concrete, but certainly not concrete nearly as tough. Perhaps we want to retain the option of easily knocking it down.
At least we now know just what crystals work and perhaps we can improve our own recipes.  Yes we uses recipes to make cement.

This is also a reminder just what a blessing cement has been to the building industry.  It has always been convenient and cheap and is one of the first things secured for all building today.  We would never put in a wooden post even without splashing cement in with it if convenient.

Monuments of Imperial Rome have survived for more than a thousand years, despite repeated floods and earthquakes. Now researchers have a new clue as to why—the use of volcanic rock in their cement.
Researchers looked at Trajan's Market and several other Imperial Roman structures to analyze the remarkable resilience of the concrete. They then reproduced a standard Imperial-age mortar—a simple mix of lime, water, and a specific kind of volcanic ash from an area now known as Pozzuoli. The recipe was taken from records of the Roman architect and engineer Vitruvius.
Scientists already knew that this particular Roman blend of concrete proved extremely tough; what they didn't know was exactly why. After letting the test concrete toughen up over 180 and then looking at it via X-rays, the scientists here noticed dense growths of plate-like crystals made of a durable mineral known as strätlingite. Those crystals prevented the spread of microscopic cracks in parts of the mortar, which usually breaks down in modern-day cements.
They detailed their findings in the Proceedings of the National Academy of Sciences.
Posted by arclein at 12:00 AM