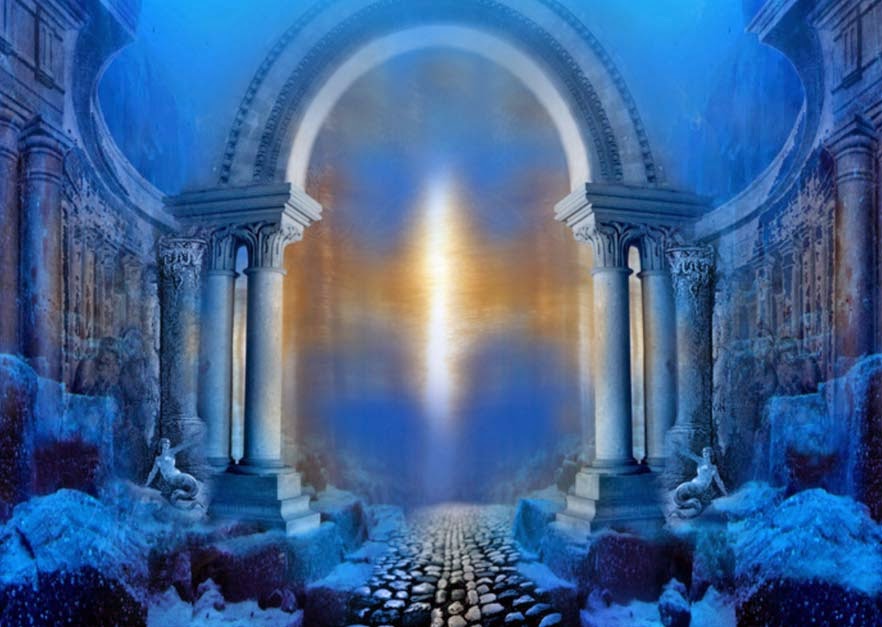 It may or may not be Orichalcum,  but it is a clear window into ancient metallurgy and is in ingot form for further reworking.  I am more inclined to think that orichalcum was a pretty clean copper gold alloy that could be used even as a veneer on a bronze casting or its like.  Once the veneer had been applied, it is a matter of gentle rubbing with an organic acid to slowly dissolve away copper while spreading out the gold itself until the entire surface was covered in gold.

Additional polishing would maintain the gold coat during the lifetime of the object.

We are starting to get Bronze Age wreaks which was all about moving ingots from all sorts of sources.  There are many mo0re down there.

Copper zinc is the most common form of raw mine smelt and working with that to provide good metal was a constant difficulty for the smiths..

Rare orichalcum metal said to be from the legendary Atlantis recovered from 2,600-year-old shipwreck

A team of marine archaeologists have discovered several dozen ingots scattered across the sandy sea floor near a 2,600-year-old shipwreck off the coast of Sicily. The ingots were made from orichalcum, a rare cast metal which ancient Greek philosopher Plato wrote was from the legendary city of Atlantis.

According to Discovery News, a total of 39 ingots (metal cast into rectangular blocks) were found close to shipwreck that was discovered in 1988 lying in shallow waters about 300 meters (1,000ft) off the coast of Gela in Sicily.

Sebastiano Tusa, Sicily’s superintendent of the Sea Office, told Discovery News that the precious ingots were probably being brought to Sicily from Greece or Asia Minor. 2,600-year-old shipwreck found off the coast of Sicily

Tusa said that the discovery of orichalcum ingots, long considered a mysterious metal, is  significant as “nothing similar has ever been found.” He added, "We knew orichalcum from ancient texts and a few ornamental objects.”

The name orichalucum derives from the Greek word oreikhalkos, meaning literally "mountain copper" or "copper mountain". According to Plato’s 5th century BC Critias dialogue, orichalucum was considered second only to gold in value, and was found and mined in many parts of the legendary Atlantis in ancient times

Plato wrote that , the three outer walls of the Temple to Poseidon and Cleito on Atlantis were clad respectively with brass, tin, and the third, which encompassed the whole citadel, "flashed with the red light of orichalcum". The interior walls, pillars and floors of the temple were completely covered in orichalcum, and the roof was variegated with gold, silver, and orichalcum. In the center of the temple stood a pillar of orichalcum, on which the laws of Poseidon and records of the first son princes of Poseidon were inscribed. (Crit. 116–119) 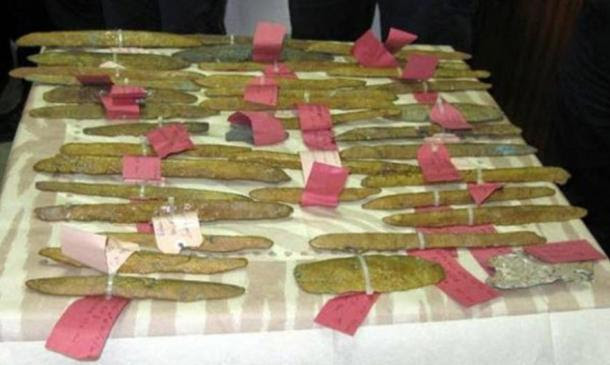 The orichalucum ingots found off the coast of Gela in Sicily. Credit: Opinión Bolivia
For centuries, experts have hotly debated the metal’s composition and origin. According to the ancient Greeks, orichalcum was invented by Cadmus, a Greek-Phoenician mythological character.  Cadmus was the founder and first king of Thebes, the acropolis of which was originally named Cadmeia in his honor.

\Cadmus, the Greek mythological figure who is said to have created orichalcum (Wikipedia)
Orichalcum has variously been held to be a gold-copper alloy, a copper-tin, or copper-zinc brass, or a metal no longer known. However, in Vergil's Aeneid it was mentioned that the breastplate of Turnus was "stiff with gold and white orachalc" and it has been theorized that it is an alloy of gold and silver, though it is not known for certain what orichalcum was.
The breast plate of Turnus was said to be made with gold and white 'orachalc’'  'The Fight between Aeneas and King Turnus' by Giacomo del Po, Italy, Naples, 1652-1726. (Wikimedia Commons)
Orichalcum is also mentioned in the ‘Antiquities of the Jews’ (1st century AD) - Book VIII, sect. 88 by Josephus, who stated that the vessels in the Temple of Solomon were made of orichalcum (or a bronze that was like gold in beauty).
Today, some scholars suggest that orichalcum is a brass-like alloy, which was made in antiquity the process of cementation, which was achieved through the reaction of zinc ore, charcoal and copper metal in a crucible.
The latest discovery of the orichalcum ingots that had laid for nearly three millennia on the sea floor may finally unravel the mystery of the origin and composition of this enigmatic metal.

Gleaming cast metal called orichalcum, which was said by Ancient Greeks to be found in Atlantis, has been recovered from a ship that sunk 2,600 years ago off the coast of Sicily.
The lumps of metal were arriving to Gela in southern Sicily, possibly coming from Greece or Asia Minor. The ship that was carrying them was likely caught in a storm and sunk just when it was about to enter the port.

We examine the dire state of perhaps the most interesting and diverse part of our planet.
DCI

"The wreck dates to the first half of the sixth century," Sebastiano Tusa, Sicily's superintendent of the Sea Office, told Discovery News. "It was found about 1,000 feet from Gela's coast at a depth of 10 feet."

He noted that the 39 ingots found on the sandy sea floor represent a unique finding.
"Nothing similar has ever been found," Tusa said. "We knew orichalcum from ancient texts and a few ornamental objects."
Indeed orichalcum has long been considered a mysterious metal, its composition and origin widely debated.
According to the ancient Greeks, it was invented by Cadmus, a Greek-Phoenician mythological character. The fourth century B.C. Greek philosopher Plato made orichalcum a legendary metal when he mentioned it in the Critias dialogue.

Describing Atlantis as flashing "with the red light of orichalcum," he wrote that the metal, second only in value to gold, was mined in the mythical island and was used to cover Poseidon's temple interior walls, columns and floors.
Today most scholars agree orichalcum is a brass-like alloy, which was made in antiquity by cementation. This process was achieved with the reaction of zinc ore, charcoal and copper metal in a crucible.
Analyzed with X-ray fluorescence by Dario Panetta, of TQ - Tecnologies for Quality, the 39 ingots turned to be an alloy made with 75-80 percent copper, 15-20 percent zinc and small percentages of nickel, lead and iron.

"The finding confirms that about a century after its foundation in 689 B.C., Gela grew to become a wealthy city with artisan workshops specialized in the production of prized artifacts," Tusa said.

The 39 ingots recovered from the wreck were indeed destined to these workshops and were used in high quality decorations.

According to Enrico Mattievich, a retired professor of physics who taught at the Federal University of Rio de Janeiro (UFRJ), the ingots are not properly made from orichalcum.

"It appears they are lumps of latone metal, an alloy of copper, zinc and lead," he told Discovery News.
Mattievich, who has led a number of studies in physics applied to mineralogy, paleontology and archaeology, is one of the scholars who disagree on the brass-like nature of orichalcum.

While other scholars equated the mysterious metal to amber and to other copper based alloys, Mattievich believes orichalcum has its roots in the Peruvian Andes and in the Chavín civilization that developed there from 1200 B.C. to 200 B.C.

According to the scholar, who claimed in his book "Journey to the Mythological Inferno" that the ancient Greeks had discovered America, a metallic alloy "with fire-Iike reflections" similar to Plato's description was found in a set of metallic jaguars of Chavin style, which turned to be made of 9 percent copper, 76 percent gold and 15 percent silver.

Whatever the origins and nature of orichalcum, Tusa's team plans to excavate the shipwreck and bring to light the entire cargo.

"It will provide us with precious information on Sicily's most ancient economic history," Tusa said.
Posted by arclein at 12:00 AM