Clothing is no better example of capitalism at work in an unregulated environment. The manufacturer must seriously over produce just to have all prospective sizes in stock at the end of the retail system.

Thus there is always end of season product that cannot be sold. At the same moment a hundred competitors fill those same outlets with fresh product. Thus the whole industry is working against a rush to market mentality and this puts massive downward pressure.

It is so chaotic and so impossible to regulate, it seems governments have actually dodged the industry. As well this process has been underway for a good two centuries and more. Today no one in the world seriously makes their own clothing. You really can chuck your entire wardrobe and do better with small change in a thrift shop of which we now see many.

Clothing is a wonderfully vibrant market

Over the holiday season, I have been out and about, looking at shoes, coats, suits, ties, and so on. The range of prices, from super low to super high, is remarkable. And not just for men’s clothes. Women’s clothing prices seem particularly chaotic. It’s to the point that when you look at an item, you can’t really anticipate whether it will cost $50 or $500 or even $5,000 (yes, I recently saw a $5,000 dress on a rack in Chicago).

Then you go to secondhand shops and get the real shock. Stuff that costs $100 retail can be $1. Sites like eBay are driving down prices to rock bottom. I can pick up a gorgeous suit or $20. Then there are the online discount shops. Comparing prices across them can play tricks on your mind. I go to Walmart and I can’t believe my eyes: some clothes seem cheaper to buy than to wash.

Clothing has emerged as a great outlier in the general price trend. We pay less for clothing today than we did 25 years ago. It’s worth understanding why.

When we talk about prices, we make reference to the consumer price index (CPI). In reality, there is no such thing. Yes, the government assembles an index and, yes, it reports the results. Economists love the CPI and follow it closely. But, in the end, it is a statistical fiction, something that exists in the math but not in real life. It’s not like a yardstick or the sea level. No prices are set by it. The CPI speaks of general trends, but it masks underlying realities.

In real life, even in a controlled economy like we have in the United States, prices for various sectors — and even within each sector — move in ways that defy aggregation. Some are up. Some are down. And prices for the same goods can be different even within the same geographic space. Stores next door to each other sell the same products for completely different prices.

A price index shields our eyes from all this pricing chaos. Pity the economic planner who uses the CPI to inform policy: he is dealing with a mental invention.

Still, we use such indices to look at the sweeping trends. Looking at the Federal Reserve statistics for prices (collected by people employed by the Department of Labor to follow these things), we see that clothing prices on average are at the same level they were a quarter of a century ago. This is despite massive Fed-driven money expansion and large price increases in sectors like education and health care.

Price pressure has been generally up, particularly for sectors hobbled by government intervention. Clothing, which lives in a market mostly free of government subsidies and manipulations, breaks the mold.

After tracking the overall CPI generally for 20 years from 1970 forward, the pattern in clothing prices changed in 1990; something happened that stopped the price increases and then generally put downward pressure on prices for the next 20 years. In the following graph, the red line is the CPI. The green line represents education prices. The blue line is for clothing prices in general (again, in the real world, there is plenty of variation in these aggregated indices). 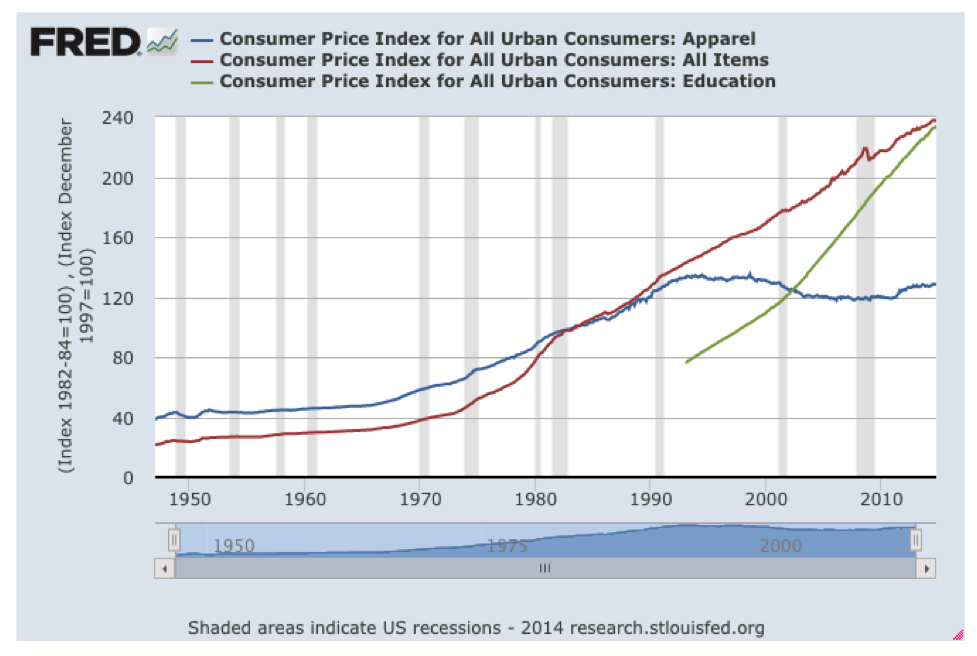 What changes occurred during the 1990s and 2000s that brought about this wonderful trend in clothing prices? There was the reform of China’s economy, which turned first to textile manufacturing. Then there was the collapse of socialism in Eastern Europe, which opened up massive new human resources and intensified producer rivalry. India and Mexico became huge producers in textiles. Those changes vastly increased the global trade in clothing.

The shift was gigantic. In 1991, American-made clothing accounted for more than half of the clothes we bought. Today, only 2.5 percent of it is manufactured in the United States. From 1991 through 2012, 75 percent of the jobs in US clothing manufacturing were lost. It was the “great depression” for the American clothing industry, but it was matched by great gains for American consumers.

Then there was the growth of Internet commerce, which allowed consumers to compare prices with much greater efficiency and opened up markets even more. Also, during these same years, copyright and patent were heavily enforced in nearly every sector, but they have never applied to clothing. High-fashion knockoffs are readily available. Yes, there is the issue of trademarks, but they are mostly unenforceable, and gray markets abound.

At every stage in this process since 1990, people were crying out about impending disaster. America is losing its textile manufacturing base! We are shipping jobs overseas! Deflation is ruining the profitability matrix in clothing! Slave labor is replacing paid labor! Crazy dot-coms are foisting shoddy products on the world and driving out legitimate retail shops! Big-box stores are gobbling up mom-and-pop stores! Pirate products are flooding the world!

If you followed all the policy debates and business-page headlines, you would swear that nothing good was happening.

And yet, look at the results. Go shopping this weekend, and you will see how clothing is a wonderfully vibrant market, with luxury shops thriving alongside discount shops, online retailers competing with brick-and-mortar shops, franchises booming even as local stores and mission thrift shops do well, too.

Brand names still sell at top dollar, even as knockoff products with similar names at a fraction of the price do well. In the end, the clothing sector is a model of how markets should work. The seeming chaos, the unpredictable and spontaneous changes that are global in scope, have ended up producing a glorious result, with no coordination coming from the top.

What is a price? It is a proposed point of agreement between a buyer and seller. The proposal is the key. It is not a marching order. Past prices represent deals done in history. Current prices represent possible deals in the future. Prices embed vast information about perceived realities: resource availability, consumer demand, cultural biases and habits, speculations about the future. The price is also an amazing tool. It provides an objective basis for accounting and for the assessment of profit and loss. Without prices — real prices rooted in real market experience — we’d be lost.

And when you look at the active market for clothing, you discover another fact: it is impossible to centrally plan prices for anything. In a vibrant market, prices fluctuate in uncountable and unpredictable ways. They are as diverse and unplanned as the human mind itself. And yet, consider all the ways in which government attempts to set and manipulate prices in other sectors: the minimum wage, rent control, medical services, postal services, and every government service. None of it makes sense.

Controlling prices by central command is as preposterous as yelling instructions to a flock of birds. If you get your way, it is only because the birds have been caged and denied the freedom to move.

No single institution controls the price of clothing. That’s a wonderful thing, and a major reason why the market works. If this is chaos, let us have more of it. Let us look and learn, and adopt that model for all the truly troubled sectors of economic life.
Posted by arclein at 12:00 AM