Magnetic Clean up an Oil Spill 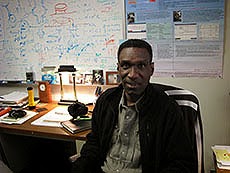 This may actually work in concert with other tools to allow an efficient collection process to take place.  It may also work to separate oil from sand which would be very welcome.  as it is it certainly allows ease of collection.

Powdered magnetite is also welcome as a nutrient in the ocean so there may be additional value produced as well.

Other variation need to be worked on as well if this can be made to work effectively.

.
Watch a magnet clean up an oil spill in seconds

Years later, the residue from massive oil spills like the Deepwater Horizon and the Exxon Valdez continues to harm wildlife. The methods that we currently use to clean up oil spills are wildly inadequate: Physical barriers that attempt to keep oil away from coastlines are ineffective, while chemical remedies can be even more toxic to the environment than the oil itself.


But this video from Motherboard demonstrates a remarkable new clean-up method for oil spills that could render current practices obsolete. Frustrated by the Deepwater oil spill and the inadequate response, physicist Arden Warner began experimenting in his garage with magnetizing oil with iron oxide dust that is already widely present in nature. Once the oil has bound with this magnetite, a magnet can be used to easily collect oil particles from salt water, bird feathers and other materials. The video includes the first large-scale test of the technique.


Warner used this concept to patent a device, a barrier containing a large electromagnet, that is designed to redirect oil spills through the ocean, onto a conveyor belt and into a separation container. This process would allow for the oil to be removed from the water and the magnetite to be reused in the future.