From a Pile of Dirt, Hope for a Powerful New Antibiotic 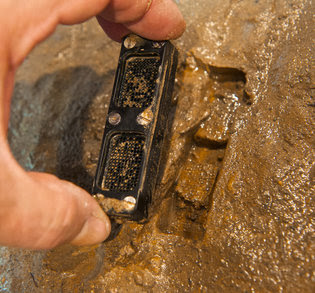 What we have here is a new way to access the natural population of microbes while eliminating the sieve of the artificial petri dish.  This hugely expands candidates and we already have an excellent prospect.

Thus real [progress with antibiotics has opened up again and with strains not likely to be easily beaten by microbial biology.  This is very good news and certainly not soon enough.

We really do need to send those super bugs packing.

From a Pile of Dirt, Hope for a Powerful New Antibiotic

An unusual method for producing antibiotics may help solve an urgent global problem: the rise in infections that resist treatment with commonly used drugs, and the lack of new antibiotics to replace ones that no longer work.

The method, which extracts drugs from bacteria that live in dirt, has yielded a powerful new antibiotic, researchers reported in the journal Nature on Wednesday. The new drug, teixobactin, was tested in mice and easily cured severe infections, with no side effects.

Better still, the researchers said, the drug works in a way that makes it very unlikely that bacteria will become resistant to it. And the method developed to produce the drug has the potential to unlock a trove of natural compounds to fight infections and cancer — molecules that were previously beyond scientists’ reach because the microbes that produce them could not be grown in the laboratory.

Teixobactin has not yet been tested in humans, so its safety and effectiveness are not known. Studies in people will not begin for about two years, according to Kim Lewis, the senior author of the article and director of the Antimicrobial Discovery Center at Northeastern University in Boston. Those studies will take several years, so even if the drug passes all the required tests, it still will not be available for five or six years, he said during a telephone news conference on Tuesday. If it is approved, he said, it will probably have to be injected, not taken by mouth.


Experts not involved with the research said the technique for isolating the drug had great potential. They also said teixobactin looked promising, but expressed caution because it has not yet been tested in humans.

Regarding teixobactin, he said: “It’s at the test-tube and the mouse level, and mice are not men or women, and so moving beyond that is a large step, and many compounds have failed.” He added, “Toxicity is often the Achilles’ heel of drugs.”

Dr. David A. Relman, a professor of medicine at Stanford, said by email, “It illustrates the amazing wealth and diversity of as-yet-unrecognized, potent, biologically active compounds made by the microbial world — some of which may have real clinical value.” He added, “We’ve been blind to the vast majority of them because of the biased and insensitive methods we use to discover drugs.”

The methods are flawed, he said, because they miss microbes that will not grow in the lab, and subject others to artificial conditions that may alter the array of potential drugs they produce.

Drug-resistant bacteria infect at least two million people a year in the United States and kill 23,000, according to the Centers for Disease Control and Prevention. The World Health Organization warned last year that such infections were occurring all over the world, and that drug resistant strains of many diseases were emerging faster than new antibiotics could be made to fight them. Compounding the problem is the fact that many drug companies backed away from trying to develop new antibiotics in favor of other, more profitable, types of drugs.

The new research is based on the premise that everything on earth — plants, soil, people, animals — is teeming with microbes that compete fiercely to survive. Trying to keep one another in check, the microbes secrete biological weapons: antibiotics.

“The way bacteria multiply, if there weren’t natural mechanisms to limit their growth, they would have covered the planet and eaten us all eons ago,” Dr. Schaffner said.

Scientists and drug companies have for decades exploited the microbes’ natural arsenal, often by mining soil samples, and discovered lifesaving antibiotics like penicillin, streptomycin and tetracycline, as well as some powerful chemotherapy drugs for cancer. But disease-causing organisms have become resistant to many existing drugs, and there has been a major obstacle to finding replacements, Dr. Lewis said: About 99 percent of the microbial species in the environment are bacteria that do not grow under usual laboratory conditions.

Dr. Lewis and his colleagues found a way to grow them. The process involves diluting a soil sample — the one that yielded teixobactin came from “a grassy field in Maine” — and placing it on specialized equipment. Then, the secret to success is putting the equipment into a box full of the same soil that the sample came from.

“Essentially, we’re tricking the bacteria,” Dr. Lewis said. Back in their native dirt, they divide and grow into colonies. Once the colonies form, Dr. Lewis said, the bacteria are “domesticated,” and researchers can scoop them up and start growing them in petri dishes in the laboratory.

The research was paid for by the National Institutes of Health and the German government (some co-authors work at the University of Bonn). Northeastern University holds a patent on the method of producing drugs and licensed the patent to a private company, NovoBiotic Pharmaceuticals, in Cambridge, Mass., which owns the rights to any compounds produced. Dr. Lewis is a paid consultant to the company.

Teixobactin is the most promising candidate isolated from 10,000 strains of bacteria that the researchers screened. In test tubes, it killed various types of staph and strep, as well as anthrax and tuberculosis. Tested in mice, it cleared strep infections and staph, including a strain that was drug-resistant. It works against bacteria in a group known as “Gram-positive,” but not against microbes that are “Gram-negative,” which include some that are major causes of drug resistant pneumonia, gonorrhea and infections of the bladder and bloodstream. Dr. Lewis said researchers were trying to modify the drug to make it work against Gram-negative infections.

Twenty-five other drug candidates were also identified, but most had drawbacks like toxicity or insolubility, Dr. Lewis said, adding that one, though toxic, may work against cancer and will be tested further.

Teixobactin attacks bacteria by blocking fatty molecules needed to build cell walls, which is different from the way most antibiotics work. Those molecules are unlikely to change and make the microbes resistant, the researchers said. But if resistance does occur, Dr. Lewis predicted, it will take a long time to develop.

Dr. Relman said the argument against resistance was reasonable. But he cautioned that “unsuspected mechanisms of resistance” sometimes develop, and that the only way to tell would be to monitor carefully what happens as the drug is used more and more.

Dr. Lewis said he hoped the research would point the way to a new approach to searching for novel antibiotics. Until now, he said, scientists have assumed that resistance would inevitably develop, and that the only solution would require scrambling to develop new antibiotics in hopes of keeping up.
“This gives us an alternative strategy,” he said. “Develop compounds to which resistance will not develop.”
Posted by arclein at 12:00 AM