Russian Roulette: Taxpayers Could Be on the Hook for Trillions in Oil Derivatives 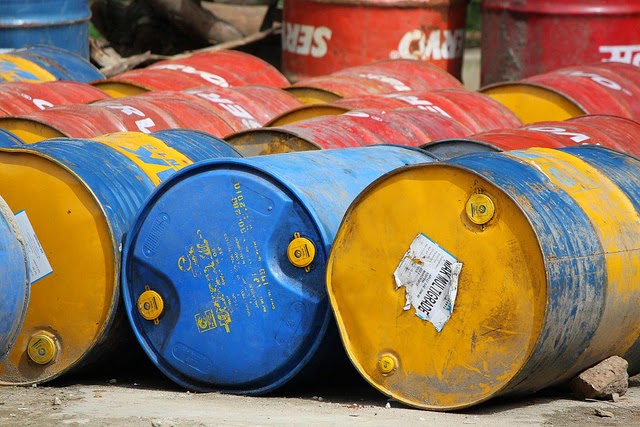 The shoe really has not dropped yet.  Fifty dollar oil is massively damaging to the hedge fund crowd and add in that only oil provided a deep enough market to absorb all that leverage in the first place. Every bet in copper or gold can be matched ten fold in the oil market.

Thus outside of financial instruments the next tier remains the oil business.  It is almost like ten to one and down to another ten to one when you get to commodities.  Thus derivative trading needs to be mostly in financial  securities and scantly in anything else.  Except that seems to be also impossible.

Thus exposure in oil is inevitable.  The big question now is who are the losers?  It may well be hte taxpayers but that is not obvious yet and the bad news will be put off for a long time.
.

Russian Roulette: Taxpayers Could Be on the Hook for Trillions in Oil Derivatives

The sudden dramatic collapse in the price of oil appears to be an act of geopolitical warfare against Russia. The result could be trillions of dollars in oil derivative losses; and depositors and taxpayers could be liable, following repeal of key portions of the Dodd-Frank Act signed into law on December 16th.

On December 11th, Senator Elizabeth Warren charged Citigroup with “holding government funding hostage to ram through its government bailout provision.” At issue was a section in the omnibus budget bill repealing the Lincoln Amendment to the Dodd-Frank Act, which protected depositor funds by requiring the largest banks to push out a portion of their derivatives business into non-FDIC-insured subsidiaries.

Warren and Representative Maxine Waters came close to killing the spending bill because of this provision. But the tide turned, according to Waters, when not only Jamie Dimon, CEO of JPMorgan Chase, but President Obama himself lobbied lawmakers to vote for the bill.

It was not only a notable about-face for the president but represented an apparent shift in position for the banks. Before Jamie Dimon intervened, it had been reported that the bailout provision was not a big deal for the banks and that they were not lobbying heavily for it, because it covered only a small portion of their derivatives. As explained in Time:

The best argument for not freaking out about the repeal of the Lincoln Amendment is that it wasn’t nearly as strong as its drafters intended it to be. . . . [W]hile the Lincoln Amendment was intended to lasso all risky instruments, by the time all was said and done, it really only applied to about 5% of the derivatives activity of banks like Bank of America, Citigroup, JPMorgan Chase, and Wells Fargo, according to a 2012 Fitch report.

Quibbling over a mere 5% of the derivatives business sounds like much ado about nothing, but Jamie Dimon and the president evidently didn’t think so. Why?

A Closer Look at the Lincoln Amendment
The preamble to the Dodd-Frank Act claims “to protect the American taxpayer by ending bailouts.” But it does this through “bail-in”: authorizing “systemically important” too-big-to-fail banks to expropriate the assets of their creditors, including depositors. Under the Lincoln Amendment, however, FDIC-insured banks were not allowed to put depositor funds at risk for their bets on derivatives, with certain broad exceptions.

In an article posted on December 10th titled “Banks Get To Use Taxpayer Money For Derivative Speculation,” Chriss W. Street explained the amendment like this:

Starting in 2013, federally insured banks would be prohibited from directly engaging in derivative transactions not specifically hedging (1) lending risks, (2) interest rate volatility, and (3) cushion against credit defaults. The “push-out rule” sought to force banks to move their speculative trading into non-federally insured subsidiaries.


The Federal Reserve and Office of the Comptroller of the Currency in 2013 allowed a two-year delay on the condition that banks take steps to move swaps to subsidiaries that don’t benefit from federal deposit insurance or borrowing directly from the Fed.


The rule would have impacted the $280 trillion in derivatives primarily held by the “too-big-to-fail (TBTF) banks that include JPMorgan Chase, Bank of America, Citigroup, and Wells Fargo. Although 95% of TBTF derivative holdings are exempt as legitimate lending hedges, leveraging cheap money from the U.S. Federal Reserve into $10 trillion of derivative speculation is one of the TBTF banks’ most profitable business activities.

What was and was not included in the exemption was explained by Steve Shaefer in a June 2012 article in Forbes. According to Fitch Ratings, interest rate, currency, gold/silver, credit derivatives referencing investment-grade securities, and hedges were permissible activities within an insured depositary institution. Those not permitted included “equity, some credit and most commodity derivatives.” Schaefer wrote:

For Goldman Sachs and Morgan Stanley, the rule is almost a non-event, as they already conduct derivatives activity outside of their bank subsidiaries. (Which makes sense, since neither actually had commercial banking operations of any significant substance until converting into bank holding companies during the 2008 crisis).


The impact on Bank of America, Citigroup, JPMorgan Chase, and to a lesser extent, Wells Fargo, would be greater, but still rather middling, as the size and scope of the restricted activities is but a fraction of these firms’ overall derivative operations.

A fraction, but a critical fraction, as it included the banks’ bets on commodities. Five percent of $280 trillion is $14 trillion in derivatives exposure – close to the size of the existing federal debt. And as financial blogger Michael Snyder points out, $3.9 trillion of this speculation is on the price of commodities, including oil.

As Snyder observes, the recent drop in the price of oil by over $50 a barrel – a drop of nearly 50% since June – was completely unanticipated and outside the predictions covered by the banks’ computer models. And with repeal of the Lincoln Amendment, the hefty bill could be imposed on taxpayers in a bailout or on depositors in a bail-in.

Financial expert Yves Smith suggests other derivative-related reasons the banks are likely to be concerned over the oil crisis, which are too complicated to explain in this article, but the link is here.

When Markets Cannot Be Manipulated

Interest rate swaps compose 82% of the derivatives market. Interest rates are predictable and can be controlled, since the Federal Reserve sets the prime rate. The Fed’s mandate includes maintaining the stability of the banking system, which means protecting the interests of the largest banks. The Fed obliged after the 2008 credit crisis by dropping the prime rate nearly to zero, a major windfall for the derivatives banks – and a major loss for their counterparties, including state and local governments.

Manipulating markets anywhere is illegal – unless you are a central bank or a federal government, in which case you can apparently do it with impunity.

In this case, the shocking $50 drop in the price of oil was not due merely to the forces of supply and demand, which are predictable and can be hedged against. According to an article by Larry Elliott in the UK Guardian titled “Stakes Are High as US Plays the Oil Card Against Iran and Russia,” the unanticipated drop was an act of geopolitical warfare administered by the Saudis. History, he says, is repeating itself:

The fourfold increase in oil prices triggered by the embargo on exports organised by Saudi Arabia in response to the Yom Kippur war in 1973 showed how crude could be used as a diplomatic and economic weapon.

Now, says Elliott, the oil card is being played to force prices lower:

John Kerry, the US secretary of state, allegedly struck a deal with King Abdullah in September under which the Saudis would sell crude at below the prevailing market price. That would help explain why the price has been falling at a time when, given the turmoil in Iraq and Syria caused by Islamic State, it would normally have been rising.

. . . [A]ccording to Middle East specialists, the Saudis want to put pressure on Iran and to force Moscow to weaken its support for the Assad regime in Syria.

War on the Ruble

If the plan was to break the ruble, it worked. The ruble has dropped by more than 60% against the dollar since January.

On December 16th, the Russian central bank counterattacked by raising interest rates to 17% in order to stem “capital flight” – the dumping of rubles on the currency markets. Deposits are less likely to be withdrawn and exchanged for dollars if they are earning a high rate of return.

The move was also a short squeeze on the short sellers attempting to crash the ruble. Short sellers sell currency they don’t have, forcing down the price; then cover by buying at the lower price, pocketing the difference. But the short squeeze worked only briefly, as trading in the ruble was quickly suspended, allowing short sellers to cover their bets. Who has the power to shut down a currency exchange? One suspects that more than mere speculation was at work.

The short sellers were saved, but the derivatives banks will still get killed if oil prices don’t go back up soon. At least they would have been killed before the bailout ban was lifted. Now, it seems, that burden could fall on depositors and taxpayers. Did the Obama administration make a deal with the big derivatives banks to save them from Kerry’s clandestine economic warfare at taxpayer expense?

Whatever happened behind closed doors, we the people could again be stuck with the tab. We will continue to be at the mercy of the biggest banks until depository banking is separated from speculative investment banking. Reinstating the Glass-Steagall Act is supported not only by Elizabeth Warren and others on the left but by prominent voices such as David Stockman’s on the right.

Another alternative for protecting our funds from Wall Street gambling can be done at the local level. Our state and local governments can establish publicly-owned banks; and our monies, public and private, can be moved into them.