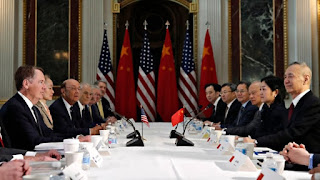 What is now out there is a massive continuing purchase of USA agricultural products in particular, not least because the Chinese need this product.  This is all good.  In particular, it reward farmers who have been caught holding the short end as this war escalated.

What is additionally clear is that CCP leadership  has also come to their senses and will negotiate hard but also fairly and seriously. This is great news.

It ius obviously not over yeat, but we do have real cooperation that starts by ending the agricultural part of the War.


Enforcement being worked out


Deal yet to be put into writing

Markets had solid gains for the week but traders sold the news... 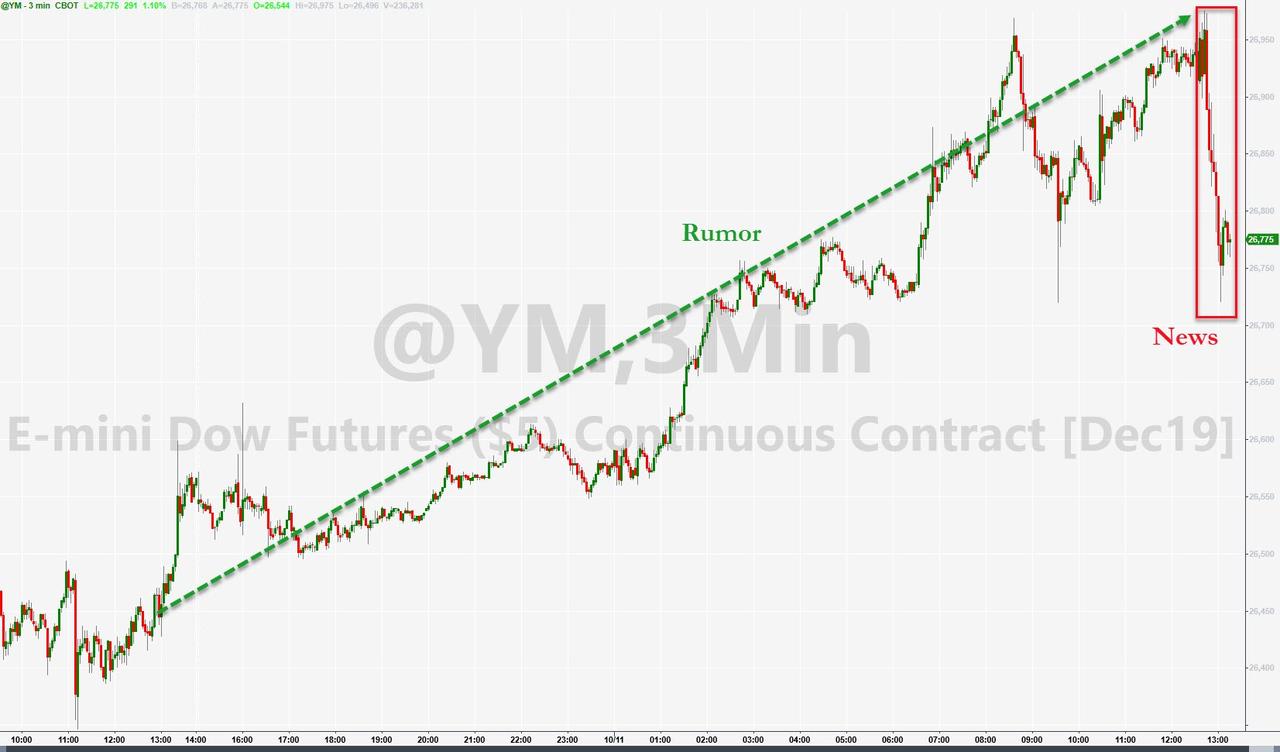 And sold the yuan too... 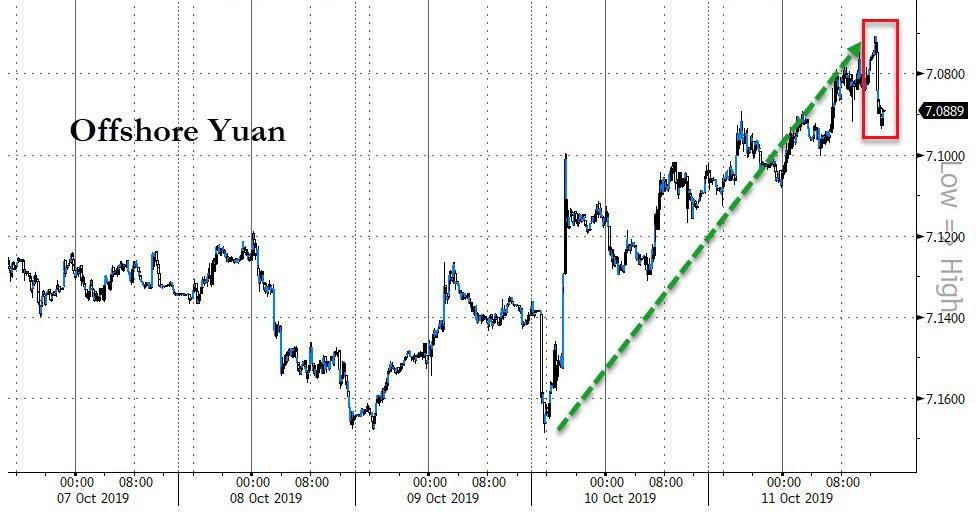 Stocks cemented gains on Friday after President Trump and Chinese Vice Premier Liu He - in a replay of their joint press conference from April (where the two men announced that the two sides were 'close' to a deal, which would assuredly be reached within a brief time frame) - revealed that Washington and Beijing had agreed to what Trump described as a "substantial, 'Phase One' deal.

During the ensuing press conference, Treasury Secretary Steven Mnuchin revealed that Washington would delay tariff hikes that were scheduled for next week (However, Trade Rep Robert Lighthizer said Trump hasn't made up his mind about the hike set for Dec. 15).

According to Trump & Co., the deal includes agreements on IP, financial services companies' access to the Chinese market, and purchases of American agricultural products by Chinese firms. 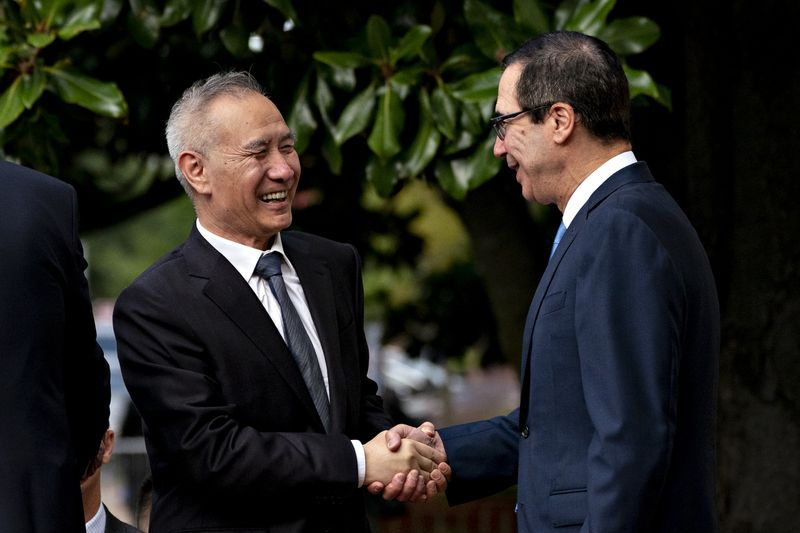 Echoing claims from back in the spring, Trump insisted that a deal would take between 3 and 5 weeks to finalize.

Trump shared a few random details from the non-deal "deal", mentioning that China had vowed between $40 and $50 billion in agricultural purchases. Trump added that a currency agreement is also going to be part of the deal, but a critical agreement on enforcement was still being worked out.

On the other hand: Huawei will not be part of this deal, and there was minimal discussion of the Bidens. Though Trump did say that he would take a look at the 'blacklist' and would make a "determination" about Huawei at some point.

"I didn't bring up Joe Biden."

Forced technology transfer will also be addressed in "Phase One", though Trump said the two sides might leave that until "Phase Two" to finish up.

Mnuchin added that the Treasury would review China's designation as a currency manipulator, a label imposed by the Treasury over the summer.

"We have an agreement on transparency in the foreign exchange market...so we're very pleased with that," Mnuchin said.

As for the "Phase One" moniker, Trump said negotiations for "Phase Two" will begin immediately after P1 is completed. As a reminder, the trade war between the world's two largest economies has been raging for 22 months already.

Employing one of his favorite rhetorical flourishes, Trump said "there was a lot of friction" between the US and China, but now it's a "lovefest." At one point, Liu handed Trump the "letter" that President Xi had written him.

Now, the relationship between the two countries is "better than it has ever been," Trump said.

When Trump invited Liu to speak, he started by thanking Trump for his "congratulatory message" about the 70th anniversary of the founding of the PROC.

"We agree that getting the US-China economic relationship right is good for China, good for the United States and good for the whole world."

He added that "we have made substantial progress" this week, praising Lighthizer and Mnuchin, before Trump butted back in to praise the "foreign exchange" agreement (the public still has only the haziest idea of what this agreement even entails).

But if you're too tired to read all that:

A White House factsheet about Liu claimed that he had been granted "special envoy" status (contrary to reports from earlier this week), granting him the authority to negotiate on Xi's behalf.

During a press conference Friday afternoon where he sworn he wouldn't talk about China, Mnuchin let slip that talks on Thursday and Friday had been "productive", and that he and Lighthizer were heading to the Oval Office after this to brief the president ahead of his meeting with Liu.

Many had wondered whether the two sides would agree to suspend the next tariff escalation, set for early next week (Oct. 15), as well as the following escalation set for Dec. 15. Many suspected that forestalling the imposition of new tariffs, and hikes on previous tariff rates, would be a top priority for the Chinese.

Still, traders must remember: Anything can happen between now and three weeks from now. After all, the White House's "substantial" deal still needs to be written. Let's review: The Dow has now soared 500 points on the news that the world's two largest economies have reached a "deal" that hasn't been written yet - but rest assured: Everybody is on the same page, and there is an agreement around a "framework".

Of course, it's not the first time we've heard that.

Carrying on with the fantasy, the group said a deal might be signed at the APEC Summit in Santiago, Chile, next month, continuing the tradition of overshadowing everything else happening at these summits.

And for what? As Sven Henrich noted, the deal - which BBG heralded as "the first major breakthrough in 18 months" is merely window-dressing. And as we've learned in the past, even though the two sides insist that the deal will be put to paper ASAP, it's not done until it's done. Case in point: Trump acknowledged that the deal could fall apart, but that the likelihood of this happening was "not good" and Mnuchin added that "there is more work to do."
Posted by arclein at 12:00 AM