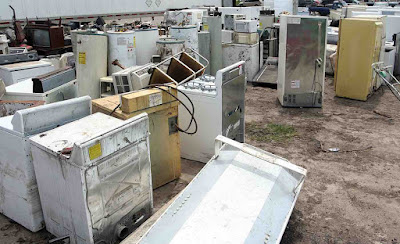 This is happening under the radar but it is certainly worthwhile if only to stimulate recycling. The value of far too much goes directly to zero and manufactures have scant incentive to pay any attention.
Remember something, when a costumer buys the best product out there he is buying freedom from eminent failure.  My wife actually returned to the manufacturer a specific baby carriage design that was actually the best in the business.  She is quite pleased to see the high standard available today.  so this is no joke.

Demanding manufacturers do meet such a standard is not unreasonable as it avoids doing it all the hard way and keeps garbage manufacturers grabbing market share with junk to no one's benefit.
.
EU Approves Groundbreaking New ‘Right to Repair’ Laws Requiring Appliances to Be Easier to Fix

In a continued effort to reduce European’s carbon footprint and make energy bills cheaper for consumers, the European Union has just passed groundbreaking new “right to repair” legislation for products such as refrigerators, washing machines, dishwashers, and televisions.

Improving the eco-design of products contributes to implementing the “Energy efficiency first” principle of the EU’s Energy Union priority.

For the first time, the measures include requirements for repairability and recyclability, contributing to circular economy objectives by improving the life span, maintenance, re-use, upgrade, recyclability, and waste handling of appliances.


“Right to repair” legislation is becoming increasingly popular as consumers across North America and Europe have vocalized their frustration over household appliances breaking down shortly after their warranties expire. Since repairing broken appliances is usually more costly than replacing it, thousands of products are simply sent to the landfill.


According to BBC, more than 20 US states are currently working on the approval of their own “right to repair” legislation—but now, the European Commission estimates that their two newly-approved measures, together with the energy labels adopted in March, will deliver 167 TWh of final energy savings per year by 2030.

This is equivalent to the annual energy consumption of Denmark and corresponds to a reduction of over 46 million tonnes of CO2 equivalent. These measures are also expected to save European households €150 ($163) per year on average.

These savings come on top of those achieved by the existing eco-design and energy label requirements, which are expected to deliver yearly energy saving of around 150 Mtoe (million tonnes of oil equivalent) by 2020, roughly equivalent to the annual primary energy consumption of Italy. For consumers, this already means an average saving of up to €285 ($311) per year on their household energy bills.


“Whether it is by fostering repairability or improving water consumption, intelligent eco-design makes us use our resources more efficiently, bringing clear economic and environmental benefits,” said European Commission Vice-President for Jobs, Growth, Investment and Competitiveness Jyrki Katainen. “It is with concrete steps such as these that Europe as a whole is embracing the circular economy to the benefit of citizens, our environment and European businesses.”

Following today’s adoption, the legislation will be published in the Official Journal of the European Union in the coming weeks and will enter into force 20 days later.


Commenting on the adoption of the measures, Monique Goyens, Director general of the European Consumer Association, said: “The new repair requirements will help improve the lifetime of everyday appliances that currently fail too quickly. It is crucial we bin the current ‘throwaway’ trend, which depletes natural resources and empties consumers’ pockets.

“The EU has started with five products that most consumers own at home and we strongly encourage legislators to make more product categories repairable,” she added.
Posted by arclein at 12:00 AM