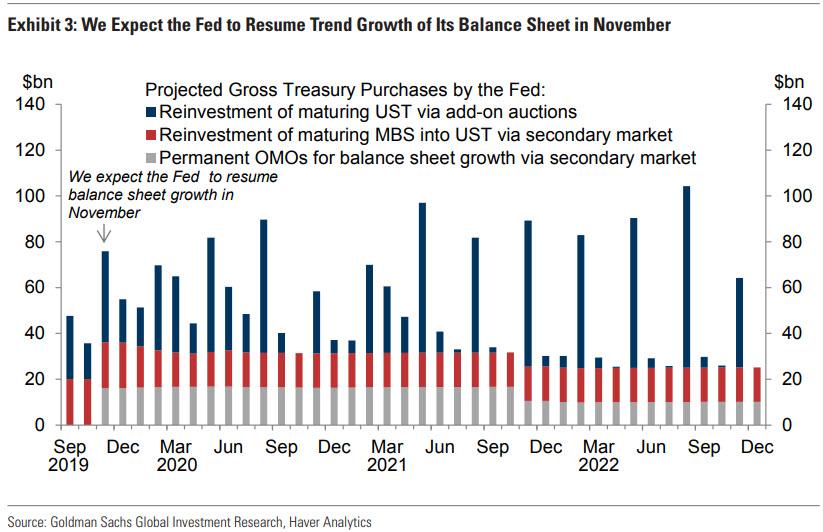 What this predicts is a forth round of Quantitative Easing  around year end.  This should be presaged by a market crash.

I think we need to pay attention.

I do think that a fast rolling crash in the market can happen in the next two months would cleanse the market of excess speculation.  It would be over quickly to be followed by a steady rise in the markets all through the election year..
.

Yesterday we reported that Goldman now expects the Fed to restart Permanent Open Market Operations, i.e., bond purchases, i.e., QE some time in November. For those who missed it, Goldman assumes a roughly $15bn/month rate of permanent OMOs, "enough to support trend growth of the balance sheet plus some additional padding over the first two years to increase the size of the balance sheet by $150bn", in the process restoring the reserve buffer and eliminating the current need for temporary OMOs.

That strategy would result in balance sheet growth of roughly $180bn/year and net UST purchases by the Fed (the sum of the red and grey bars) of roughly $375bn/year over the next couple of years.

However, assuming Goldman is correct, there would be a little over a month before such POMO returned to permanently increase the size of the Fed's balance sheet, potentially resulting in a continued liquidity shortage for the next 6 or so weeks.

Which probably explains why moments ago, the Fed surprised market watchers who were expecting the Fed to continue conducting only overnight repos, but announcing that not only would it conduct overnight $75 Billion repos every day from Monday until Thursday, October 10, but it would also introduce 2 week term repos with a total size of "at least $30 billion" for the first time since the financial crisis.

This is what the NY Fed said moments ago in a statement regarding repurchase operations:

In accordance with the Federal Open Market Committee (FOMC) directive issued September 18, 2019, the Open Market Trading Desk (the Desk) at the Federal Reserve Bank of New York will conduct a series of overnight and term repurchase agreement (repo) operations to help maintain the federal funds rate within the target range.

The proposed schedule of upcoming overnight and term repos is as follows: 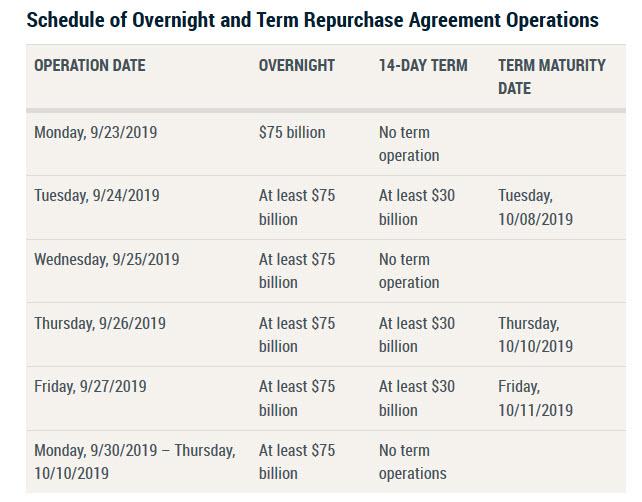 What are the implications from the above? There are several, and they are concerning.

First, by expanding the "plumbing" arsenal from just overnight repos to three "at least $30 billion" term repos for at least one week, the Fed is telegraphing that it was expecting the overnight repo oversubscription situation to continue indefinitely, which in turn suggests that the NY Fed is worried the dollar funding shortage may continue, and as such it is expanding its toolbox to release up to at least $90 billion in additional liquidity, which together with the $75 billion in rolled overnight repo, would unlock as much as $165 billion in additional liquidity at the end of next week.

As a reminder, Goldman calculated that the Fed's restart of POMO would increase the size of the Fed's balance sheet by $150 billion, which is almost in line with the $165 billion in liquidity that the Fed will unlock in the form of "sterilized" repo operations. In other words, the Fed just confirmed that the reserve shortfall is likely at least $165 billion, and in doing so, it also indicated that a long-term solution will need to be reached, one which almost certainly will validate the prediction that QE/POMO is coming in November.

Second, as noted earlier, whereas overnight repo rates have stabilized, term repo rates remain elevated, especially those terms that capture either quarter or year-end, times when the US financial system traditionally suffers from a material liquidity shortfall: "The term market is still quite choppy," confirmed Subadra Rajappa, head of rate strategy at Societe Generale in New York. As Bloomberg further adds, for the 10-year note futures contract versus the cheapest-to-deliver Treasury security to Dec. 31, the basis Friday implied a term repo rate of about 2.15%. While that’s down from about 2.40% late Thursday, it remains above the Fed’s target range for its benchmark rate, and is also above today's G/C overnight repo rate of 1.90%, with Alex Li, head of U.S. rates strategy at Credit Agricole, noting that elevated term rates are a problem because of the quantity of capital at risk.

Third, the reason why the Fed was likely forced to launch term repo, is because while investors have called for measures that will permanently boost reserves, such as POMO/QE, the Fed has so far refrained from embarking on a longer-term solution to ease the funding stress, writes Bloomberg's Elizabeth Stanton. Specifically, Chair Powell said after Wednesday’s policy decision that he didn’t see "any implications for the broader economy" from the repo crunch, which prompted traders to exit long basis trades - long positions in Treasuries hedged with shorts in futures - which normally perform well when the Fed is cutting rates. "Futures outperformed cash amid the spike in repo and in the wake of an FOMC that could have done more to instill confidence in its attention to the issue," Credit Suisse strategist Jonathan Cohn said. “The move flushed out significant long basis positioning.”

In short, despite the generous use of the $75 billion overnight repo, it wasn't enough, and STIR and repo traders were spooked enough to force the Fed to engage in yet another form of liquidity injection, in the form of term repos.

If and when that too is insufficient, the Fed will have just two options: pursue a standing repo facility, which it is already doing to an extent with term repos, and eventually launch outright POMO (i.e. QE), to boost the level of reserves in the system, as it is now obvious that $1.3 trillion in "excess" reserves is nowhere near enough for the US financial system, which needs at least another $400 billion in reserves - as shown in the chart below - to see the FF-IOER spread stabilize. 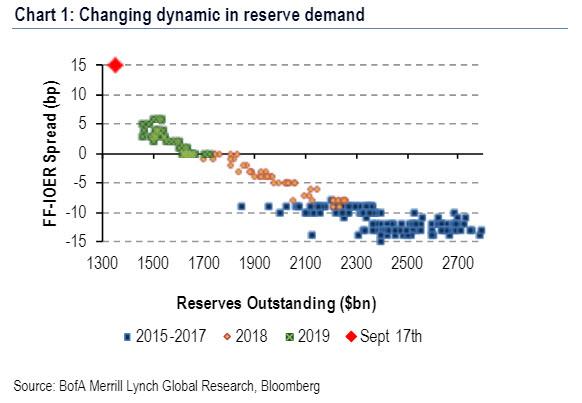 What does this means from a practical standpoint? The panic in repo will almost certainly fade at least in the near term, however, look for elevated term repo rates, since they will all fall beyond the quarter end period when repo rates tend to soar as banks withdraw liquidity in order to "window dress" their balance sheets. And certainly look for a surge in term repos that capture year end, which as a reminder, saw last year's repo rate explode to above 4%.

One final practical implication: since the market is now convinced it urgently needs the Fed to restart POMOs, expect another "near-death" event for the repo market some time in October/early November, which will be the catalyst forcing the John Williams Fed to move beyond mere repos and activate POMOs as the liquidity-injecting operation of choice. And with that, QE4 will have arrived.