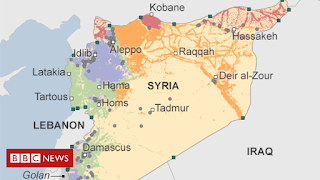 A sharp reminder that intervention without a proper goal and a full alliance must go badly.  You become the foreign invader and a prime target.

Sticking around merely sustains a conflict that would otherwise dry up easily enough.


The Kurds were quite happy to allow US troops to maintain their interests in a GREATER KURDISTAN as long as they were willing.  The minute that came to an end, sense struck.  They are now loyal to Syria and Syria gets it northern border back.

An intervention with a clear objective followed by a quick exit plan may work as it surely intends to place a new local regime in place with legitimacy.  Except doing that without hugely restoring large elements of the former regime is impossible..

So Mr. Trump removes a handful of U.S. troops from part of Syria and both halves of the War Party go ape excrement.

The talking point is the same for both halves: "OMG, we’ve abandoned our allies and they’re all going to die! Especially the women and children."

Never mind that U.S. forces regularly kill men, women and children all around the world themselves, day in and day out. The Obama Administration set the standard: According to top Obama officials Madeline Albright and Bill Richardson, 500,000 dead Iraqi kids in pursuit of U.S. foreign policy is justified.

But never mind because within six days, those abandoned Kurds had allied themselves with Syria’s Assad Regieme for protection. And Assad’s troops had moved to the Turkish border, reasserting at least part of it’s lost sovereignty.

So one unintended lesson from Trump’s Syria withdrawl is that when foreigners butt out, things improve. Rapidly.

This isn’t the only time foreigners butting-out improved things.

For example, despite the MilitaryIndustrialCongressional part of Deep State expectations, when the Brits "abandoned" Basra in Iraq during one of the Iraq so-called wars, this was the result:

BASRA, Iraq (Reuters) - Residents of Iraq’s southern city of Basra have begun strolling riverfront streets again after four years of fear, their city much quieter since British troops withdrew from the grand Saddam Hussein-era Basra Palace. …Mortar rounds, rockets and small arms fire crashed almost daily into the palace, making life hazardous for British and Iraqis alike in Iraq’s second-largest city. To many Basrans the withdrawal of the British a month ago removed a proven target.

Locals need to handle their problems themselves because they’re the ones who must adapt to their own ecological niche. Adding foreigners at best complicates matters, at worst causes the problems in the first place.

And U.S. forces in Syria are definitely viewed as foreigners. Unlike Russia, which had been invited in, according to the centuries old Treaty of Westphalia, the U.S. shouldn’t be there in the first place. Because "it" wasn’t invited. Not that international law matters anymore.

That foreign intervention doesn’t work is the universal lesson from "The Battle of Algiers" called "one of the most influential political films in history ." It seems likely that Gen. David Petreus was aware of the lessons from this film when he guided the "surge" out of Basra and Iraq conflict in 2008.

Apparently the D.C. War Party minions are ignorant of that history lesson. Of course they are.

Another unintended lesson: You can’t trust the U.S. government. The Kurds should have learned that from the first Iraq so-called war when Daddy Bush encouraged Kurdish revolt against Saddam but allowed Iraqi helicopter gun-ships to massacre them when they did.

This is by no means unique to the Kurds. Eventually this will cause what the D.C. mechanism wishfully calls "the international community" to shrink even further, making its chronic foreign crimes more difficult to disguise.

Do you suppose George Washington actually knew something when he advised in his farewell address that the Republic should "avoid entangling foreign alliances?"