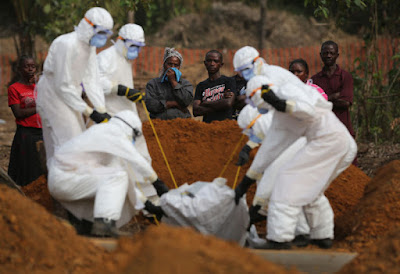 It appears we are well along on having this disease mastered.  A successful vaccine will work best to eliminate losses amount medical workers in particular.

We may never completely control these Monsters, but we can catch them and preven them from taking off to produce an out of control epidemic.

This is an example of proper vaccine research.  Proper application includes a halo of vaccination around those exposed to a victim.   That can stop it cold.  .

Ebola. The very word evokes fear, and with good reason. To date, the virus has been fatal for the majority of those who have contracted it.

For nearly two decades after the first outbreak in Sudan and Zaire (now South Sudan and Democratic Republic of Congo) the transmission process wasn’t clear. Health workers weren’t equipped with basic gear like masks or gloves. Things are different now: There’s a greater awareness of how Ebola spreads, patients are quarantined, health workers wear protective suits (when the resources allow it), disinfectants are available, vaccines are being tested, and treatments for early-stage Ebola have been found to be up to 90% successful.

Still, outbreaks are difficult to control, particularly when they occur in countries that lack infrastructure. Systems that aren’t equipped to deal with routine health needs, like preventative care, birth, and vaccinations, struggle even more during emergencies, especially ones that leave very contagious people dead on the streets. Distrust in government and in medical workers compounds the deadliness of the virus. Public health experts warn that emergency response is a more like a Band-Aid than a vaccine, and that investing in local health systems is the only way to ensure that Ebola—or another virus—doesn’t become a pandemic. Will we listen?

The dawn of Ebola


In August 1976, Mabalo Lokela, a headmaster from Yambuku, Zaire checked into his local hospital with malaria-like symptoms. He died two weeks later and was the first recorded patient of a disease so horrific it would inspire zombie tales. Several people who had contact with Lokela also got sick. “The illness is characterized with a high temperature of about 39°C (102°F), hematemesis [vomiting blood], diarrhea with blood, retrosternal abdominal pain, prostration with ‘heavy’ articulations, and rapid evolution death after a mean of three days,” wrote Ngoy Mushola, a doctor from Bumba who traveled to Yambuku to observe the outbreak.

Almost at the same time, in Maridi and Nzara in Sudan, another outbreak of the virus occurred. Doctors enumerated the symptoms: high fevers, aches, nausea, bleeding, delirium, and a “mask-like” or “ghost-like” face. These first two outbreaks highlighted two especially scary features of Ebola: The medical infrastructure is usually poor in the areas where the virus thrives, and it exposes healthcare workers to tremendous risk.

“This is not an African disease. This is a virus that is a threat to all humanity.”

What is Ebola and what does it do?

Ebola is a type of hemorrhagic fever, a class of virus that also includes Marburg, Lassa, and yellow fever. It enters the host’s cells to replicate itself, targeting the liver, immune system, and blood vessels first. Once inside a cell, the virus produces a protein, called Ebola virus glycoprotein, which affects cell adhesion. Blood vessels become porous, and blood leaks out of them, causing internal hemorrhage.

The first symptoms of Ebola—fever, sore throat, muscle pain—can easily be confused with malaria or flu. The symptoms that follow are more severe: bleeding (both internal and external), diarrhea, vomiting, and impaired organ function.


Senga Omeonga, a surgeon in Liberia who contracted and survived Ebola told NPR that the combination of near-constant vomiting, diarrhea, and fever, plus the isolation of being in quarantine makes the virus emotionally as well as physically taxing. “It’s like you’re living in hell,” he said in a 2014 interview. “The only person you see is the nurse, and they even stay a distance from you when you talk, so no touch. So you feel like… I don’t know how to describe it… maybe a ghost.” Survivors are likely to be immune to the strain of Ebola they contracted, and some are putting their immunity to work by caring for new patients. They may, however, be susceptible to one of the other strains that can infect humans.


If your inbox doesn’t support this quiz, find the solution at bottom of email.
Brief history
1976: The first recognized outbreaks of a highly deadly hemorrhagic fever occur in Sudan (now South Sudan) and Zaire (now DRC). The virus is named after the Ebola River in the north of DRC.
1989: The Reston strain of Ebola (not contagious to humans) is first detected outside Africa, in the Philippines and US.
1994: Health workers are broadly equipped with protective gear like gloves and masks for the first time.
1994-1995: The strain of virus responsible for the epidemic in DRC is isolated; it will be used to create the first Ebola vaccine.
1995: Antibodies found in a survivor are isolated and used to create one of two experimental retroviral treatments currently being tested.
2002: The development of the Ebola vaccine begins in the US.
2014: The first clinical trial for the vaccine is scheduled in West Africa.
2014-2016: West Africa experiences the largest Ebola epidemic to date with 28,000 people infected and 11,000 dead.
2018: The DRC announces the second Ebola outbreak of the year, which will go on to become the worst in the DRC’s history, and is still ongoing.

2019: A team of researchers announces that two medications being used in the ongoing epidemic in the DRC have had up to 90% success in treating early-stage Ebola patients.
Have a friend who would enjoy our Obsession with Ebola?


How does Ebola spread so quickly, and how can it be contained?

Ebola is contracted through direct contact with bodily fluids of a sick person. The virus is not airborne, but it survives a relatively long time—days, even—outside the body of the host. Sterilization is fundamental in the control of the epidemic, which is why the virus has spread less quickly, and been better contained in countries with more robust health systems, such as Nigeria.

One of the scariest aspects of Ebola is also what has prevented it from turning into a pandemic—it’s too deadly. Ebola patients are only contagious once they start showing symptoms, but often they are immediately bedridden, and can’t unknowingly spread the virus.

Even though the flu kills far more people (80,000 in the US alone in 2018), Ebola is so horrific that some scientists have theorized that it was responsible for everything from the Plague of Athens in 430 BC to the Black Death.


An experimental vaccine for Ebola is expected to be approved by the Food and Drug Administration (FDA) by the end of 2019. In the US, three rounds of clinical trials—the first done on a few dozen volunteers, the second on hundreds, and the third on thousands—need to be successful before a new drug can be presented for approval to a commission, and after that, accepted for commercial use. It can take many years, and if the medication is being developed in the US, as in the case of many Ebola vaccines, it needs FDA approval to be licensed.

When a treatment is being researched for a very deadly disease, and early testing has shown promising results, the FDA can use the “animal rule” and allow human use based on animal models, making the drug available even before completing the human trial. The treatment isn’t commercially available, but can be used it in an emergency context, for instance during the ongoing outbreak.

The World Health Organization (WHO) calls this “compassionate use” or “expanded access.”

Volunteers can access a treatment that is still being developed with the idea that the danger they face with no treatment is so great that the risks of an ineffective treatment pale in comparison.
Watch this!

In the DRC, rumors have spread that Ebola doesn’t exist, and that it was planted by foreign governments to eradicate the local population, making the current outbreak even more difficult to curb. France 24 looks at the political infrastructure fostering campaigns of misinformation.
Posted by arclein at 12:00 AM