Beijing Is About To Make An Epic Miscalculation: Rabo 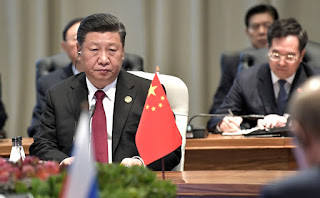 Essentially the CCP is desperate to hang on to their economic wedge.  Yet that is exactly what has to go.  All this allows Trump to keep jacking the tariff profile which is steadily forcing deterioration in the Chinese export profile.

All this leads to accelerating pressure on the CCP.  What is not understood is that this also prepares Global industry for a massive transition from using China as a manufacturing base to suddenly shifting entirely to SE Asia and India. This is the real risk and potential outcome of a USA - Chinese Trade War.  What are they thinking?

The CCP is clearly dominated by stupid people whose grasp of policy is archaic and who understand cooperation as weakness to be exploited by them.  Particularly an awful idea when you are yourself holding out that you are way stronger.
.

Beijing Is About To Make An Epic Miscalculation: Rabo


Submitted by Rabobank's Michael Every
https://www.zerohedge.com/geopolitical/beijing-about-make-epic-miscalculation-rabo

Some headlines today are about the US unemployment rate falling to a 50-year low of 3.5% on Friday, which they did against a payrolls report showing no major wage pressures and very slightly weaker-than-expected job gains. Has anything changed on that front really? No. Labour markets still lag, not lead, and won’t be leading us into a US, then global, downturn.

Some headlines today are about second sets of first-hand whistleblowers, as the US #Ukrainegate scandal continues to blow on and on - alongside more leaks of alleged past presidential phone calls to world leaders that underline why they might have needed to be made more secure of late. Has anything changed on that front really? No. This is still political and as partisan as it gets – and Trump is doing his usual thing of escalating rather than retreating when under pressure, upping the ante for both sides.

Another major headline today is that we are, once again, in a crucial Brexit week. French President Macron has apparently given UK PM Johnson until the end of this week to come up with a final, final plan B for Brexit, after which the die is apparently cast as it will be too late to offer anything substantial to the EU Summit on 17 October. We have genuine suggestions in the UK press that if the Plan B is only fit for the Plan Bin, and so Hard Brexit looms, that BoJo may then variously: 1) Refuse to quit as PM, even if another Prime Minister is selected by the Rebel Alliance in parliament, instead waiting in 10 Downing Street for the Queen to fire him or the police to arrive; 2) Ask Hungary to veto an EU extension to the end-October Brexit date; or 3) Sign an extension, but make clear he will appoint Nigel Farage as UK EU Commissioner, and will then veto the next EU budget and sabotage the union from within. Clearly a massive game of Brexit bluff and double-bluff is going on. So no change there. And epic miscalculations are close to being made. So no change there either.

Yet perhaps the most important headline today is Bloomberg reporting that Chinese trade negotiators arriving in the US this week are apparently showing reticence to address any of the structural causes of China’s trade surplus (i.e., subsidies and non-tariff barriers, etc.) because they feel Trump is weakened and hence desperate for a deal. There should be no surprise on the Chinese refusal to address its structural economic model: that is something I have reiterated would be the case time and again, and is the key reason why we do not expect a real deal to be done. So no change there.

However, regrettably this again underlines that Beijing is about to make another epic miscalculation if so. As noted, Trump ALWAYS escalates when put under pressure, and has never shown anything so far but a tendency to raise tariffs when disappointed. Recall that there were reports his first instinct when China walked away from trade talks back in May was to double the 25% tariffs to 50%, before opting to move to 30% instead. If China thinks Trump is going to crumble now just because he faces possible impeachment, they are about to get a very nasty surprise – and hence so are markets. This morning China is still closed for the last day of Golden Week, but when it is back in force, expect yet more fireworks if those headlines are correct. Of course, China believes it has all the answers to the trade war: pigs the size of polar bears: Sino-Soviet gigantism as a cure-all once again.

For those who think China is fully in control of this whole process and it is the US who is flip-flopping--and there are many in that camp--consider how well Beijing is managing the situation with Hong Kong. Friday’s decision by Hong Kong CEO Carrie Lam to introduce British colonial era emergency legislation in order to (initially) ban the wearing of face masks has seen days of protests and chaos, the entire MTR network shutdown for the first time in 40 years, bare supermarket shelves, and queues at ATMs - as well as showing the new law is unenforceable. As the South China Morning Post states worryingly: “Anti-mask law effectiveness is in doubt. Now Hong Kong is on the brink and we will all go down with the ship” In short, an epic miscalculation risks playing out.

For markets the warnings should be clear: try to calculate carefully for epic global miscalculation.

For example, on Friday we saw Hong Kong retailers’ shares rise when the face-mask ban was initially announced: how did that work out over the weekend?

For another example, we recently saw global yields spike – a move we have since seen largely reversed: how did that sell-off work out for many bond bears? Lower for longer until we go through the Looking Glass, still seems the order of the day.

And we continue to see efforts to short USD, yet the underlying power of the dollar is evidenced yet again today not just by this risk-off backdrop, but by China pulling out of a USD5bn energy deal in Iran under the threat of US sanctions. Yes, the fundamentals of the US look weak in isolation, but everyone else’s look worse: how is a short USD position, especially vs. EM FX, going to work out for you?
Posted by arclein at 12:00 AM