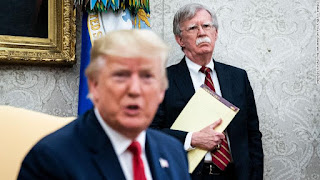 It is clear that for three years, that Bolton sustained the trajectory of the Neo Con foreign policy portfolio while Trump played a rear guard action defusing what he could.  This was driven by the compelling reason that you cannot fight on every front simultaneously.  Bolton pushed the status quo which actually remained stable but also deteriorating in favor of future decisions.
It turns out that he was dumber than a bucket of bolts.  You never walk into a key meeting without making sure you all have the exact same message and only one person has the lead.  All this means is that he was a DEEP STATE useful idiot who somehow got briefed stage left and had zero loyalty to his boss.

Trump can tolerate a lot as he has proven but in your face treason is a bit over the top.  Threatening annihilation without telling Trump is insane even.

Trump has one certainty.  A lot of bad deals were entered into during the past twenty years aimed at supporting the USA arms industry in particular as if that interest was also a USA interest.  This has instead produced a cloud of sworn enemies for no plausible profit not literally stolen by these self same interests.  This cannot be sustained and must lead to a massive attack on USA interests.
That attack is already underway with the NAZI/NWO/CB system and the CCP as well.  We have ample indication of global collusion all directed at first weakening the USA and then reducing its military or at least tying it down in a futile blood letting.

Recall that the EU has already been badly weakened and this has not been reversed as yet.  Russian leadership is needed there.
.
Russia's #1 Newsman Says Trump Dumped Bolton Because He Was Covering For Zio-Corruption in the Ukraine (Kiselyov)


For any leader, it is important to have a few advisors who come across as total psychopaths. It keeps your enemies (and friends) on their toes.

But what happens when your key foreign policy advisor actually is completely insane, and an ignoramus to boot? President Trump found out first hand with John Bolton. Fortunately for his administration, and for world peace, he took corrective action.


On Tuesday, President Trump fired his National Security Advisor, John Bolton. "Fired" is the word. It's used in English when somebody is immediately dismissed. Trump announced his decision through Twitter. And he frankly explained to journalists that A: Bolton didn't get along with the president's team at the White House and B: He made major foreign policy mistakes. As an example, Trump mentioned Bolton upsetting the positive dynamics in the North Korea negotiations when Bolton decided to threaten Kim Jong-un with the Libyan scenario.

The Libyan scenario is when the country is bombed, its leader, Muammar Gaddafi, is killed, and the state is destroyed, with the people put back into the Middle Ages. Trump doesn't conceal now that after Bolton's words about the Libyan scenario for North Korea he was enraged. However, he was silent about it at the time, letting Bolton claim that he had no disagreements with the U.S. President. And all the rumors about those disagreements are evil, fake stories, coming from enemies and, above all, from Russia. The American press, via the NY Times and Bloomberg, pleasingly assisted Bolton, spreading the White House unanimity thesis, which was, as it's absolutely clear now, fake.

Meanwhile, Bolton led Trump to one foreign policy dead end after another. And here are the names of those dead ends for America. China. The trade war is its peak, with no prospects of solving it. Russia. The relationship is worse than ever. The arms control treaties have been terminated, there are no new ones, and nobody's working on them. More often, experts speak about the threat of nuclear war, with mutual annihilation. Iran. The nuclear deal has been canceled, New sanctions have been imposed, although the U.S. didn't get anything from Tehran. North Korea. No progress. The just-started process was re-frozen. Afghanistan. Bolton managed to hold back the talks at Camp David with the Taliban and the president of Afghanistan, as suggested by Trump.

The U.S. positions on the Middle East didn't become stronger at all. In Turkey, everything is bad after they bought the Russian S-400 missile systems. The relations with their European NATO allies have lost sincerity.

But Trump's main headache in Europe is Ukraine. And with Kiev, John Bolton acted quite traitorously towards Trump. The topic turned out to be so painful for Trump that I think he even doesn't want to mention Ukraine as the last straw that defined the decision to fire Bolton. One would think, what's the matter here? There's, however, a reason. And the reason is deeply personal. And, how it sometimes happens, the personal outweighs even the geostrategic situation.

And the key here is this. Trump is already preparing for next year's elections. It's obvious that he wants to stay for a second term. His national support rating, according to CNN, dropped even further this week - to 39%. The most dangerous opponent from the Democrats, as of now, is Joseph Biden. Trump needs compromising material on Biden ASAP. And, through him, on the whole Democratic Party. In this sense, Trump may find the sweetest material in Ukraine. The material that it was Ukraine, not Russia, who interfered in the U.S. elections. That the dirty play against candidate Trump was led by the American Democrats from Ukraine. And how Biden's family business is connected with Ukraine. All that together is already called, in the USA, Ukraingate. But John Bolton was trying to protect Ukraine for some reason. He was covering it, ignoring Trump's burning interest in this matter.

Our next report will be dedicated to what Trump is trying to find in Ukraine.

But first, one observation. Really short. On Thursday, the debates of the Democratic Party's presidential candidates took place in Houston. Here are the three leaders, according to a survey. Joe Biden: At 76 years old, he's older than Trump. The 70-year-old Elizabeth Warren. And Bernie Sanders - he's 78 years old. Next fall, everybody will be a year older. Nancy Pelosi, the spiritual leader of the Democrats and Congress, is now 79 years old. If that's not a gerontocracy, then what is a gerontocracy?
Posted by arclein at 12:00 AM