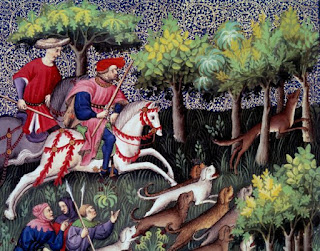 This then takes us back nicely to 1200 AD.  Better yet it should be possible to use the same techniques on building wood, and bog wood to extend this continuously back by at least another 500 years and ultimately back through 1159 BC and the Bronze Age Collapse.

We had and have the rough data for all this, but now we are adding a lot of data to refine the elder dates while depending on this work to create precision.

More recently, the fact that it has been wetter, means it has been dumping more heat during the summers.  Excellent growing conditions.

Studying the rings inside oak trees has allowed scientists to produce one of the most detailed records yet of how the UK's climate has changed over the last millennium.

It reveals a picture of summer rainfall stretching back more than 800 years.

Periods of prolonged extreme weather coincided with historical accounts of famines and droughts.
The researchers said the data presented "huge lessons" about the potential impacts of climate change on society.

Core samples were taken from hundreds of oak trees across the UK, in a project led by the University of Oxford and Swansea University.

The trees grow a new ring each year and are particularly sensitive to how wet it has been during the summer months.

The widths of the rings were studied, as well as the chemistry of the wood.

It allowed the researchers to access what they describe as a natural archive of climate information, going way beyond the records held by the Met Office - which only cover a few hundred years.

The research also supported the Met Office's findings that British summers had become 13% wetter since the last century.

"We need that long-term picture to understand how unusual that is, and to try and figure out what might happen to our climate in future," explained Mary Gagen of Swansea University's tree ring research group.

A striking example is the data gathered from the mid 1200s to early 1300s, with the oak rings reporting a prolonged period of above-average summer rainfall for many decades.

It coincides with a time of great famines, including what is known as the Dantean anomaly, when years of cool, wet summers resulted in crop failures - and the reported deaths of 20% of the population of Europe.

"In the past climate change happened due to natural changes, now and in the future, it's happening faster, with more extremes - at our hands," Prof Gagen warned.

"As our climate system responds to greenhouse gases in the atmosphere, everything that's extreme gets more extreme - so we can expect more dry events, more droughts, real heatwaves, but also more cold events and more times where it's really, really wet."

"We have more control over our societies now than in the past, but we can still expect life to get really, really hard, and particularly for vulnerable communities in the global south."

The UK oak project's professors Danny McCarroll and Neil Loader used the findings to build a giant, nine metre-long jigsaw to present the data in a visual way, and start conversations with the public about the UK's changing climate.

It will go on display at Swansea's National Waterfront Museum this autumn.

The research has also led to the development of a pioneering new way of pinpointing the year in which historic buildings were constructed.

As well as living trees, samples were taken for the project from ancient oak timbers.

The team discovered they could analyse oxygen in the wood, which would have formed from the rain which fell on the trees as they grew, to match the patterns in different timbers.

As her undergraduate dissertation project, Swansea student Bethan Roberts is attempting to date the Grade II-listed Tithe Barn in Abergavenny, Monmouthshire, using samples from the oak beams in its ceiling.

"It's really exciting to be involved in this research at this time," she said.
"Understanding what the climate was like in the past will show us what could happen in the future too."

Too bad they didn't do any astronomy to check their weather against. Currently we are looking at having nearly all the planetary mass in one quarter of the solar system, a 300year event, yet they keep pumping out global warming alarmism to justify their funds.