A Surprising Japanese Interpretation of the Lost Years of Jesus Christ 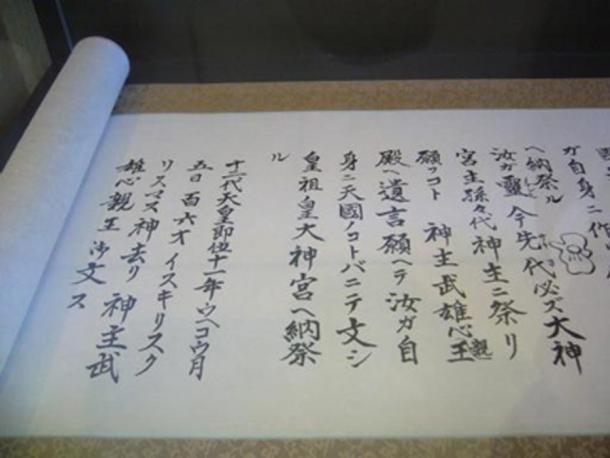 This tale is doubly unlikely but in opposition.  We have now an extensive and plausible narrative of Jesus and the white brotherhood in particular.  All that makes his presence in different parts of the world both plausible and certainly possible.  That includes going to the South East USA as the great circle route remained intact.  Thus a trip to China is also possible.

For Japan, this sounds like a disciple arrived with a companion as the bare minimum understanding..  Again the Jesus movement consciously sent disciples out to all corners of the Earth to actually secure the movement.  It success was always pastoral and this allowed the movement to expand almost out of sight, but typically with local political support.

After all, a movement that stops the promotion of armed rebellion is terribly helpful..

A Surprising Japanese Interpretation of the Lost Years of Jesus Christ

https://www.ancient-origins.net/history/surprising-japanese-interpretation-lost-years-jesus-christ-006023
Most Christians believe that Jesus was born and died in the Middle East. However, there is a small group of people in Japan who believe a completely different story.

Some Japanese researchers think that Jesus’ history is different from what is generally believed.  This alternative version of Christ’s story was forgotten until 1935, when Kiyomaro Takeuchi (Takenouchi) reportedly discovered an ancient document in Ibaraki Prefecture in Japan. The text of the manuscript presented a shocking tale. It says that Jesus was buried in Herai Village in the Aomori district in Japan.

Moreover, the document declares that he was buried at the site with his brother. The text looked very authentic and there was no reason to doubt that it could be an original. Nonetheless, the Japanese government decided to ban the document from public view. It became a part of the collection of the museum in Tokyo which was bombed during World War II. All of the museum’s archives were destroyed; however the Takeuchi family had made copies of the ancient text before they informed officials of the discovery. These copies became the gates to a forgotten legend in Japan.

A copy of the document on display in the village of Shingo. ( Check Your Facts )

One of the copies of the document is now located in a small museum in Shingo Village (traditionally known as Herai) near the famous “Tomb of Jesus.” Analysis of the text proved that it was originally written in ancient Japanese. Nowadays, not many people have enough knowledge on this type of writing to read it themselves, but it is also almost impossible to fake such a manuscript.

Moreover, the first linguistic research proved that the traditional name ''Herai'' doesn't belong to the Japanese language, but it seems to be surprisingly similar to the word ''Hebrai'', meaning ''Hebrew''. In the ancient Hebrew language the word ''Herai'' resembles the phrase ''a mountain''. 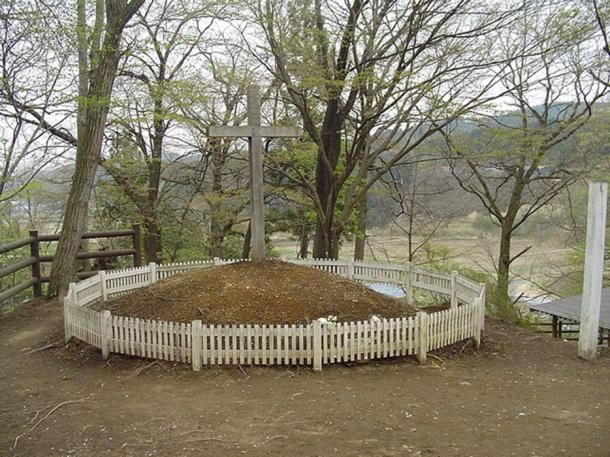 "Tomb of Christ" (Shingo, Aomori, Japan). ( thor hestnes/CC BY 3.0 )
According to the description posted near the tomb:

''When Jesus Christ was 21 years old, he came to Japan and pursued knowledge of divinity for 12 years. He went back to Judea at age 33 and engaged in his mission. However, at that time, people in Judea would not accept Christ's preaching. Instead, they arrested him and tried to crucify him on a cross. His younger brother, Isukiri casually took Christ's place and ended his life on the cross.

Christ, who escaped the crucifixion, went through the ups and downs of travel, and again came to Japan. He settled right here in what is now called Herai Village, and died at the age of 106. On this holy ground, there is dedicated a burial mound on the right to deify Christ, and a grave on the left to deify Isukiri.'' 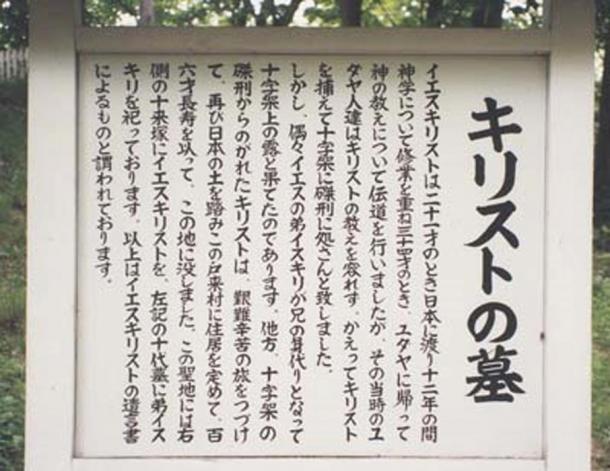 Another Version of the Story

Another version of the story is known from the book Thiaoouba Prophecy by Michel Desmarquet, who tried to find the real story of Jesus in Japan. According to the story he described, Jesus left home at age 14 and arrived to Japan when he was 50 years old. There, he got married and had three daughters. He supposedly taught his rules on living, but it seems that during his travels through Asia, his teachings became more global than before. He reportedly lived in Herai for around 45 years and died there when he was about 100 years old. The Japanese version of his story described his brother as two years younger than him. They were said to be buried at the same site.

Archaeologists have looked for evidence such as bones, teeth, or artifacts, which could suggest the existence of a burial at this place. Unfortunately, nothing like this had been found so far. The burial is located on a mountain and it is shaped by the soil. Nowadays, there are also Christian crosses and other features related to Christian symbolism.

The most interesting evidence confirming the strange connection between the Japanese and Hebrew languages is an ancient song that has been known in Herai for the last 2000 years. It contains the lyrics "Nanya Do Yara Nanya Do Nasareno Nanya Do Yara", which means "What is it? What's happening? What are you going to do?"

According to Dr. Tom J. Chalko, when repeated many times these words have a different meaning. The first part of the song “Na-nee-ya” when translated means "it is ME, Joshua, the child given by Yehova (Ya)". He believes that the song sounds like the Hebrew which is known from texts that may have been written in Jesus’ lifetime.

Who was Jesus in Japan?

It seems unlikely that Jesus really escaped from the Middle East. But, if it was possible, he would perhaps have chosen the same destination as Mary Magdalene. In this case, he would have traveled to southern France and lived there with his family.

Why would have went to Japan? In Asia, there are a few more stories about a wise man from the Middle East who reportedly traveled to the East. He was seen in India, Nepal, and even China. In the Kashmir region, people worship another tomb of a wise man called Jesus. It is almost impossible that so many stories from different parts of Asia don't have any reasons behind them. Especially when it is acknowledged that for many centuries Christianity wasn't a popular religion in Asia. 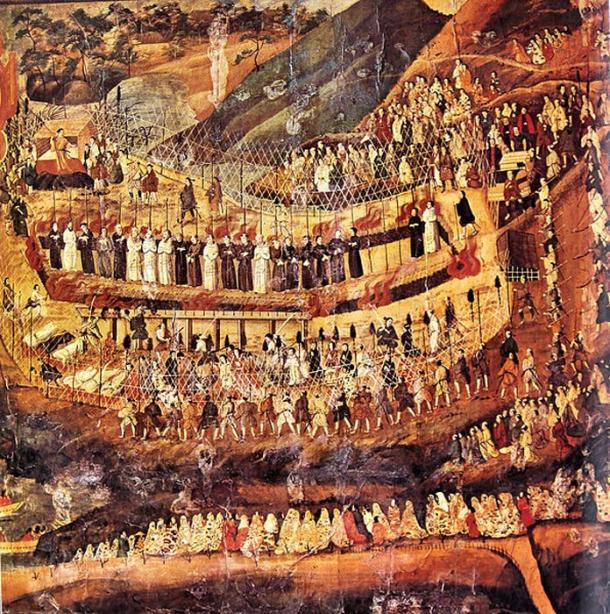 However, there must be something more hidden behind this story. It is possible that one of Jesus’ students, maybe even one of his apostles, traveled to Asia. At this point, it is necessary to remember that in ancient times the word ''brother'' could be used if two men were relatives, but also if they had a strong bond as, for example, close friends.

Or were the travelers just Christ’s followers who wanted to share knowledge of their leader? Perhaps they were people who escaped from their homeland after the execution of Jesus because they didn't want to follow his fate? These questions may never be answered…