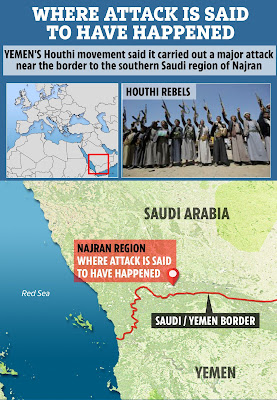 With a little perspective, it appears that we are looking at a strong well trained group over running a much less effective group.  This can be countered in the same way and surely will be.  All forces have strong elite units that can maul the majority of the opposing force.

It did embarrass the Saudis.  That may actually open the door for a treaty.

If getting smacked in the face can do that, then good.  An end game here is needed.

A 72 hour military operation in southern Najran Province of Saudi Arabia was carried out by Yemen’s Houthi movement with very little media coverage. Starting on early Thursday, a major operation raged, and by early Saturday the Houthis reported a major victory.

Three entire Saudi brigades in Najran were effectively wiped out. The reports suggest between 200 and 500 Saudi soldiers were killed, and thousands more captured. Saudi arms and armored vehicles were also taken in the fighting.

Offensives against the Saudis are rare, and usually much smaller. On Sunday, the Houthis released video footage related to the operation. They described the operation as involving a number of ambushes set up around the area, and luring the brigades into a trap.

The Houthis are bragging about this, and unsurprisingly so as this is a military victory like they haven’t seen in quite some time. The Saudis, interestingly, have not made any comments at all about the fight.

The Saudis weren’t alone in suffering this defeat, either. The Houthis reported that a number of Pakistanis, Iraqis, and Sudanese, who they labeled “mercenaries,” were also captured in the operation.

They also made mention of Yemenis who had been deluded into fighting on the Saudis’ side being among those captured. There has been no way to independently confirm exact numbers captured, or their origins.

The lack of comments from the Saudis speaks volumes, however, as they aren’t even trying to spin this at all. US officials quoted Saturday tried to present the loss as a sign of desperation by the Houthis, an attempt to push advancing Saudis away from the border.

Perhaps the most interesting fact that hasn’t been addressed is that this fight was going on since at least early Thursday, so when the Saudis announced they were joining a partial ceasefire on Friday (of which Najran was not a part), they did so in the middle of this huge battle.