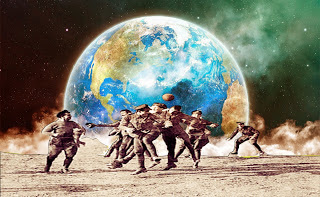 Curiously, there is a bigger picture and it has the whole Globe engaged.  All this is even possible because of the Internet and the fact that over four billion folks today are wired through cell phones.  This also means it is all happening in real time.  Recall that globally, patriots all picked up on the Q phenomena.  This certainly seeded the possibility.

The direct impact of the rise of Trump supported directly by the American people to contest Washington and Global corruption was not lost on electorates anywhere.  This has driven the abrupt rise of patriot clones of Trumpism everywhere and that is shaking the old order to the core.  Tet us call it what it truly is - the TRUMP MEME.

This strongly suggests that it may be possible to generate a completely novel global dispensation that is both political and economic.  I bring this up because at the moment it all looks a long way off.  Yet it had to start with the destruction of the corrupted NWO MEME.  That fight is still very much on and may generate plenty of grief yet.  We continue to see ample positive progress and an outright reversal seems avoidable.

Communion of all Nations

The ultimate global dispensation will be known as the Communion of all Nations, with Nations properly defined as modestly as ethnic city states for example to any size of border free population that wants it.  This can accommodate all ethnicity with a reasonable form of effective self rule.   The nation will dispense internal money and power through an electoral process.

The Global economy will be generated through credit generation at the natural community level which manages such generation through the Rule of Twelve which nicely augments micro finance systems.  Transitioning to this will take time but the evolution will be quite natural.

Please observe that this future has no place for the primacy of any particular tribe who tries to pervert power to their own benefit.  What remains fundamental is universal fairness and will be long fought over.

The present fight is ripping out the Natural Pedophile Conspiracy NPC that provides the necessary networks behind the NWO and its primary Socialist/Communism/Nazism ideology.  The cry for socialim remains the public face of this movement which is a drive to seize power and impose hierarchy however dressed up.

The simple elimination of global poverty will eliminate their entire platform which has now been applied for over a century to grab power. This must be ended and our whole intellectual apparatus also needs to be properly engineered upon a foundation of sound economic thinking that establishes a correct base for knowledge building and development.

So yes, the fight is underway and it is happening all over.  Everyday we see another government change over to a conforming regime to the developing dispensation.  Now we see major activity inside the Vatican as well with an investigation launched.  That was unexpected.  England is going through its BREXIT experience to its inevitable resolution.  In the EU, their whole financial shell game is been rewritten as well.

At the same time, the Trade War with China has started the process of extracting the Chinese people from the grip of the CCP.  Hong Kong has revolted.  All SE Asia and India are now on alert.

In short, there is plenty of stress in every region with ample threat of war as well.  But the real threat is financial ruin for all of them.

The next phase can see reorganization along the lines of something like a tentative:

These are also potential identities as well.

And we have a nice even twelve to work with under the rule of twelve as well.  All good fun.

What Trump has uncovered for all the world to see that the majority of all citizens of all countries are patriots first.  This holds for China as well and we see even the CCP trying to use this.  Yet disassembling China itself to empower its multiple provinces with natural internal integrity is a very credible option.  Of course, Hong Kong makes a great city state that is also a nation.

My key point is that there are really no truly large populations holding substantial integrity that cannot be profitably subdivided as well and should be.  The key is the elimination of excess military spending and its natural hierarchy and will to war.  A truly global system can actually evolve toward just this.  Central is understanding that war itself has long been obsolete as an economic tool.