Fire Cider: How to Make a Fast, Effective Remedy for the Flu 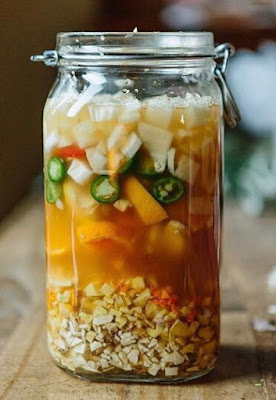 This is an inspiring brew and perhaps worth chasing.   May be much better than apple cider vinegar by itself.

Remember it is an infusion that is preserved by the raw vinegar. Mix it with lemonade or orange juice to make it easily potable.

It may also be useful in salads as well along with your oil of choice.

Fire Cider: How to Make a Fast, Effective Remedy for the Flu

As flu season gears up, it’s wise to have some remedies on hand that can help you feel better. While the mainstream websites are already beating the flu shot drum, it’s important to recall that past vaccines have not historically been very effective. It’s totally up to you what preventative methods you use, but if you or a loved one get sick, you will want some relief fast.

One of my favorite remedies for cold and flu season is fire cider. It’s loaded with anti-inflammatory, immune-supporting, and decongestant herbs. Best of all, it’s super simple to make. Even though the combination sounds bizarre, it’s actually tasty in a sweet and sour kind of way.

Fire cider can be made entirely with items from the grocery store, or customized with more exotic herbs from an herb shop. I even have an “instant” version to share with you.

Flu season here in the US is from October through May, with the peak in February. We hadn’t even hit peak flu season yet, and already Alabama had declared a state of emergency and California was running out of Tamiflu. According to the CDC’s flu map for the week ending January 6, 2018, the flu was widespread in 49 states, and active in all 50 states.

In general, most flu cases do not require hospitalization. Sometimes, it may not even be the flu, but a bad cold instead. While the symptoms are similar, this guide can help you sort out the difference.

When we have the flu, we feel congested, achy, feverish, and have a bad cough. The traditional recipe for fire cider is loaded with simple, familiar, yet potent, ingredients which address each of those complaints.

Garlic is well-known for its immune-supporting effects. It also acts as an expectorant and an anti-inflammatory, which helps those painful coughs and body aches. It is also known as a diaphoretic, which means it causes the body to sweat. This helps to reduce fevers naturally. Thankfully, fresh garlic is a common ingredient in most grocery stores.

Onion and garlic are both alliums, and therefore are related plants. They also share some similarities in properties. The unassuming onion is a potent expectorant and eases coughs. Onion is often used in cough syrups for this reason. Onions are so accessible in every store, please do use fresh onion.

Warming ginger root also helps to induce sweating and fever reduction. Ginger also acts as an antispasmodic, which helps to ease those terrible coughing fits. It is highly recommended to use fresh ginger root (technically, it’s a rhizome, but no one ever bothers to call it that).

Horseradish is excellent for relieving congestion. It is also an effective diaphoretic (sweat-inducing/fever-reducing) herb. On top of that, horseradish is also an expectorant. What could be better for the flu? Sometimes, horseradish can be hard to find at the grocery store. It is in the mustard family, so go ahead and substitute some crushed mustard seed or mustard powder if you need to.

Cayenne is hot, but it is also a superior anti-inflammatory. I use it every time I’m congested to relieve the inflammation in my sinuses which make the sensation of congestion worse. This hot pepper can also get a congested nose running again, making blowing your nose a lot more productive. You can use any kind of hot pepper you wish. You can use fresh hot peppers, cayenne powder, or red pepper flakes.

Is there anyone left who doesn’t know that turmeric is anti-inflammatory? Because of this, turmeric is a huge help for reducing that achy feeling we get with the flu. There’s only one grocery store near me that sells it fresh. If you can find it fresh, great. If not, use the powdered herb.

Of all natural health products, apple cider vinegar has probably more health claims to it than any other. I’m dubious about most of these claims. However, it is a good menstruum (solvent) to extract the benefits out of the other ingredients. It also does seem to help ease coughing and congestion. I stick with the raw apple cider vinegar, and thankfully, this is also a common grocery store item.

There is just something so wonderful about lemon. It lends both its bright flavor and its powerful decongestant properties to this recipe. You can use fresh lemon slices or add lemon juice at the end. Also, play with adding lime and other citrus fruits for fun.

Honey is effective at calming coughs. Our kids’ pediatrician was thrilled when we told her we keep bees, as cough suppressants had been found ineffective for children, while honey had been shown effective as a cough suppressant. Honey lends the sweet flavor to this hot, sweet, and sour remedy. Honey is added at the end.

How to Make Fire Cider

You’re going to be surprised at how easy this is.
To this herbal vinegar, also called an acetum, you can add lemon juice and honey to your tastes. Once the honey has been added, this is known as an oxymel (a sweet and sour recipe).

Nothing could be easier. But, just in case you still have questions, or want ideas for other herbs you can use, check out this video tutorial. It’s from the Herbal Skills Intensive, a course available on HerbalPrepper.com. The tutorial is a bit lengthy, but it is a thorough explanation of the remedy and how to make it.

I know, I know, a lot of people are thinking, “It takes two weeks or longer to make, but I”m sick now!” That’s ok, I’ve got you covered with an instant version. Check out the video below to see how this herbal wizardry comes together.

Don’t be afraid of the heat from the cayenne. You can add as much or as little hot pepper as you wish. Missing an ingredient? Substitute or skip it. This is literally the most forgiving recipe I’ve ever seen.
There’s a lot of cold and flu season left to go. Mix up a batch today, and be ready in case you get sick. Let me know what you think of the recipe!


Have you heard of fire cider? The first time I encountered this traditional folk recipe, I have to admit I was terrified. Horseradish, garlic, onion, ginger, and hot peppers infused in vinegar? To drink? It took me years before I tried it, but you can be braver than me. It’s worth it! Plus you can use fire cider in so many ways — from cold cure to cooking to cocktails.


Hot, pungent, sour, and sweet, fire cider is certainly not for the faint of heart. Yet this fiery concoction has been revered for generations as a simple and effective remedy to relieve sinus congestion, ward off colds and flus, aid digestion, and increase circulation. Fire cider can be sipped neat on its own, mixed with other beverages, or used in cooking. (You might think of it like a savory shrub.) It’s especially useful to have fire cider on hand in cold weather.


As a folk remedy there are countless variations, but most fire cider recipes include ingredients like fresh horseradish, garlic, onion, ginger, and chile pepper. These are infused in apple cider vinegar (vinegar draws out many plant constituents), which is then strained and sweetened with honey. My recipe is based on the one popularized by herbalist Rosemary Gladstar (see her video and recipe here). In addition to the ingredients mentioned above, I like to add turmeric, citrus, and herbs like parsley, rosemary, and thyme. Together they form a potent punch that is immune-boosting, antibacterial, antiviral, congestion clearing, and warming.


I really encourage you to have fun and create your own fire cider according to your tastes and available ingredients. In fact, I make it a little different every time. In some batches I use spices like cinnamon and cardamom or add vitamin C-rich rose hips. Other times I use ground cayenne or dried chiles rather than fresh habaneros or jalapenos. If you use ground chile, start with a small pinch; you can always add more to taste after you strain the vinegar.


If you’re a fan of spicy foods, you might take to fire cider right away, tossing back shots to get your blood flowing on a cold winter day. If you have a more timid palate, you might want to dial back on the chile, sweeten with extra honey, and start with small dashes of fire cider in your food rather than drinking it straight.

Straight up: Rosemary Gladstar recommends taking 1 to 2 tablespoons at the first sign of a cold, and then repeating every 3 to 4 hours until symptoms subside. Some people also take fire cider as a preventative during cold and flu season.
Mix with lemonade or orange juice
Mix with hot water and extra honey to make a tea
Use in place of vinegar in salad dressings and condiments (like this fire cider honey mustard at Salt+Fat+Whiskey)
Drizzle on steamed vegetables or sautéed greens
Use in marinades for meat, tofu, and tempeh
Add to soups and chilis
Try a couple of dashes in a cocktail, such as a Bloody Mary


Are you inspired to make fire cider now? I’d love to hear what you put in yours and how you use it.


Note: As with any health concern you should, of course, listen to your own body and the advice of your health practitioner. If you’re curious about the research associated with some of these ingredients, check out the University of Maryland Medical Center’s guides to garlic, ginger, and cayenne/capsaicin.

habanero chile, split in half
1

raw honey, or more to taste

Place all of the vegetables, fruits, herbs, and spices in a clean 1-quart jar. Fill the jar with vinegar, covering all the ingredients and making sure there are no air bubbles. Cap the jar. If using a metal lid, place a piece of parchment or wax paper between the jar and the lid to prevent corrosion from the vinegar. Shake well.


Let the jar sit for 3 to 6 weeks, shaking daily (or as often as you remember).


Strain the vinegar into a clean jar. Add honey to taste. Refrigerate and use within a year.
Posted by arclein at 12:00 AM