The First Victims of the First Crusade 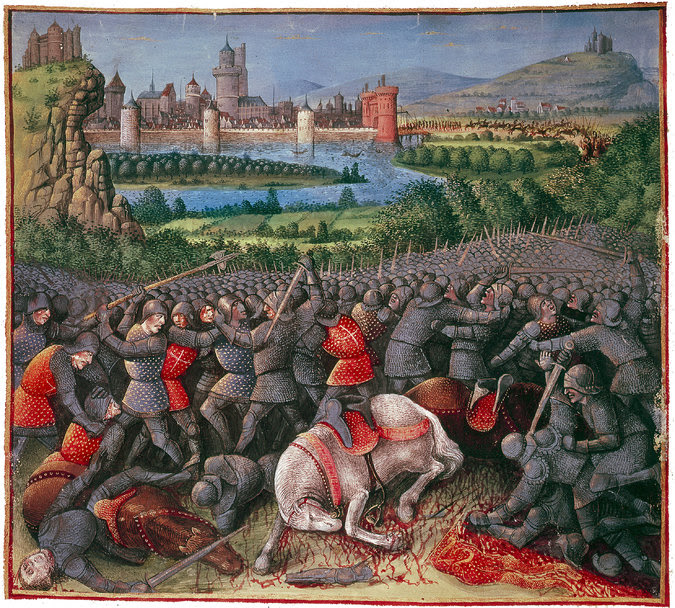 I really do not see early antisemitism as modern antisemitism.  I see it more as a primitive tribal response to a declared tribe in almost every large community.  All minority tribes were then vulnerable to communal attack as we see even today in India and elsewhere.


Antisemitism arose with modernism where a philosophical rationale other than tribalism became necessary to rationalize the irrational.


What made the Jewish experience unique was their concentration on commerce which was necessarily a minority position in every community.  A little like the one chinese restaurant and one Jewish store in every town in the prairies and no other restaurant or merchant around.  These were not on the edge of society either but in the foreground allowing an easy focus for bloodlust when things went bad.


The First Victims of the First Crusade

THE first victims of the First Crusade, inspired in 1096 by the supposedly sacred mission of retaking Jerusalem from Muslims, were European Jews. Anyone who considers it religiously and politically transgressive to compare the behavior of medieval Christian soldiers to modern Islamic terrorism might find it enlightening to read this bloody story, as told in both Hebrew and Christian chronicles.
The message from the medieval past is that religious violence seldom limits itself to one target and expands to reach the maximum number of available victims.

Just as the Crusades were integrally linked to Roman Catholicism in the Middle Ages, terrorist movements today are immersed in a particular anti-modern interpretation of Islam. This does not imply that a majority of Muslims agree with violent religious ideology. It does mean that the terrorists’ brand of belief plays a critical role in their savage assault on human rights.

Cultural ignoramuses portrayed President Obama’s references to the Crusades and the Inquisition at the recent National Prayer Breakfast as an excuse for Islamic terrorism, but the president’s allusions could and should have been used as an opportunity to reflect on the special damage inflicted in many historical contexts by warriors seeking conquest in the name of their god.

Times were hard in northern Europe when the crusaders began to gather in the spring of 1096. A disappointing harvest in 1095 had brought famine to the poor. As James Carroll observes in “Constantine’s Sword,” there is “no doubt the crusading impulse rescued many serfs, but also landowners, from desperate economic straits.”

Pope Urban II did not tell crusaders to murder Jews, but that is what happened when at least 100,000 knights, vassals and serfs, unmoored from ordinary social restraints but bearing the standard of the cross, set off to crush what they considered a perfidious Muslim enemy in a faraway land. Why not practice on that older group accused of perfidy — the Jews?

The city of Trier, on the Moselle River, was one of the early stops. The Jews were, according to a Hebrew chronicle, offered the choice of conversion, exile or death — similar to the choices offered by groups like the Islamic State and Boko Haram. After the Jews of Trier made an unsuccessful attempt, by paying off a bishop, to persuade the crusaders to bypass their community, they sought refuge in the prelate’s palace.

The chronicle recounts that “the bishop’s military officer and ministers entered the palace and said to them: ‘Thus said our lord the bishop: Convert or leave this place. I do not wish to preserve you any longer.’ ” It goes on: “ ‘You cannot be saved — your God does not wish to save you now as he did in earlier days.’ ”

The anonymous author of the chronicle, known as Text S to scholars, probably did not witness all of the events he describes. However, scholars of the First Crusade generally consider the text authentic. Furthermore, Christian accounts — also most likely written decades later but at a time when many survivors would have been alive — tell essentially the same story.

Albert of Aix, a Christian born in the late 11th century, describes atrocities in Mainz — another stop on the crusaders’ rampage through the Rhineland — by a band headed by one Count Emico. Again, there is a bishop who initially promises the Jews protection for what Albert describes as an “incredible amount of money.” But Emico and his Christian soldiers broke into the hall where the Jews were held.

“Breaking the bolts and doors, they killed the Jews, about seven hundred in number, who in vain resisted the force and attack of so many thousands. They killed the women, also, and with their swords pierced tender children of whatever age and sex ... Horrible to say, mothers cut the throats of nursing children with knives and stabbed others, preferring them to perish thus by their own hands rather than to be killed by the weapons of the uncircumcised.”

Albert reports that a small number of Jews escaped because they agreed to be baptized “because of fear, rather than because of love of the Christian faith.” With all of the money taken from the Jews, Emico and “all that intolerable company of men and women then continued on their way to Jerusalem.”

This account highlights several elements analogous to the actions of modern terrorist groups. These include attempts at forced conversion; the murders of women and children; and the imposition of financial penalties on coerced converts who try to remain in their homes. Albert’s disparaging remarks about Emico also reveal that there were Christians who felt about the crusaders exactly the way many Muslims today surely feel if they are unlucky enough to find themselves in the path of violent lunatics.

In Mosul, the Iraqi city conquered by the Islamic State last June, Christians had coexisted for centuries with Muslims who did not share whatever medieval beliefs the terrorists claim to represent. The city was also home to the Yazidis, whose theology includes elements of Zoroastrianism as well as Islam and Christianity.

When the brutal warriors established control, thousands of Yazidis were forced to flee for their lives if they did not convert to Islam. Christians were also ordered to formally convert, pay taxes to Shariah courts or face “death by the sword,” without any possibility of escape.

Thomas Asbridge, director of the Center for the Study of Islam and the West at the University of London, commented in this newspaper that “we have to be very careful about judging behavior in medieval times by current standards.”

This issue is better judged from the other side of the looking glass. What we actually see today is a standard of medieval behavior upheld by modern fanatics who, like the crusaders, seek both religious and political power through violent means. They offer a ghastly and ghostly reminder of what the Western world might look like had there never been religious reformations, the Enlightenment and, above all, the separation of church and state.

Susan Jacoby is the author of the forthcoming book “Religious Conversion: A Secular History.”

A version of this op-ed appears in print on February 15, 2015, on page SR5 of the New York edition with the headline: The First Victims of the First Crusade. Order Reprints| Today's Paper|Subscribe

The first recorded organized riots against Jews evidently took place in Alexandria in 38 C.E. Alexandria and Egypt may be singled out as the source of ancient anti-Semitism. The reasons for the alienation of the Jewish community may lie in their having sided first with Alexander and then with Julius Caesar against the Egyptians, An early, anti-Semitic Egyptian history of the Exodus, by Manetho (now lost, but mentioned elsewhere), cites a different reason. The Jews sacrificed animals such as the ram, which were Egyptian gods - the Jews were, in other words, God killers, an accusation that was later woven into Christian anti-Semitism.

There is only one extant account of the Alexandria pogroms of 38, that of Philo of Alexandria, In Flaccum. The event that evidently triggered the pogrom was the visit of Herod Agrippa to Egypt, which caused a stir among the Hellenized population. Flaccus enacted a law depriving Jews of local citizenship, and opening their property and persons to attack. About 400 homes were destroyed and numerous synagogues, and at least 40 persons were killed. In celebration of the birthday of Caligula, in August, Jews were marched into the theater and forced to eat pork. Those who refused were killed. Subsequently, the emperor Caligula had Flaccus killed. ref ref
A second Alexandrian pogrom took place in 58 CE. Josephus tells of an especially vicious Alexandrine pogrom that took place in 68, in which about 50,000 Jews were supposedly killed in Alexandria. This number is probably greatly exaggerated. (Josephus Flavius, Jewish Wars, 2:487-498). There were evidently numerous other ancient pogroms that are only alluded to indirectly.
Posted by arclein at 12:00 AM