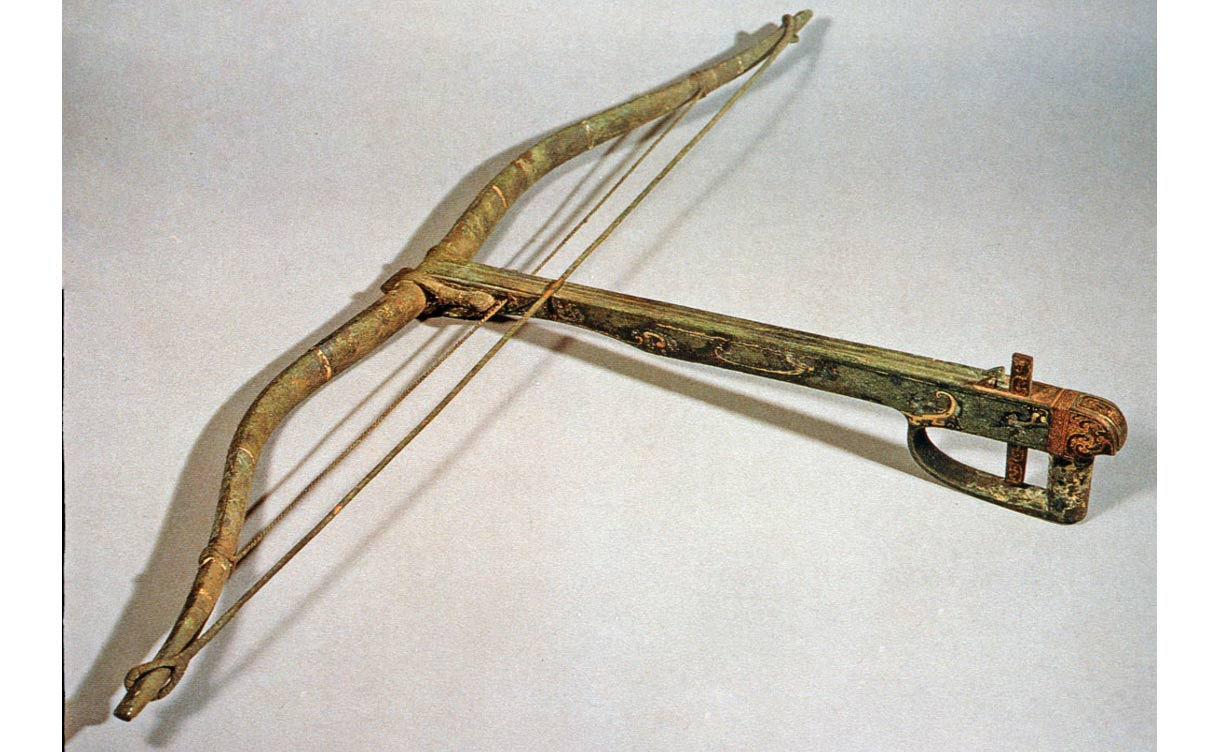 What is pleasing about this discovery is that it confirms technology time points.  We know that metallurgy has been continuously developed for at least 5000 years and that a global Bronze Age saw this technology shared worldwide up until 1159 Bc and then sporadically since until the modern era.
This discovery should confirm the quality levels maintained then and from then unto the modern area beginning three centuries ago.  Recall the metallurgical brilliance of Samurai swords and Toledo steel.  Yet the metal used on these cross bows must be bronze.
It is a reminder that quality steel came late and truly only during the medieval period.  The Romans had steel swords but they were short for a really good reason.  They broke.  At the same time, a bronze sword of the same length was its equal.
Transition to better iron and steel took a long time and was likely driven by the simple disappearance of sufficient bronze.  After all Atlantean copper inports halted in 1159 BC.  I should add here that sulphide copper ores make a poor quality bronze and only the native copper of Lake Superior provides a quality bronze.
However the Chinese likely had a usable copper sulphide source in SE Asia that allowed empirical metallurgy to clean up the alloys over time. Recall these alloys get worked over and over again.

In an astonishing find, archaeologists in China have located a 2,200-year-old crossbow in pristine condition buried with the vast army of terracotta warriors at the excavation pit at Xi’an, Shaanxi province.

Reported by news site China.org to be the most complete crossbow found to date at the site, it has a 145 centimeter (57 inch) arch and, incredibly, the bow string remains intact and measures 130 centimeters (51 inches) long. Researchers believe the string is made of animal tendon rather than fabric, which would have degraded and disappeared long ago.

Shen Maosheng, head of the archaeological team which made the discovery says that two wooden sticks, called Qing, were found alongside the crossbow. There Qing were thought to help maintain and transport the crossbows thousands of years ago, as noted in ancient records. Expert opinion could never be confirmed until now, with the discovery of the intact mechanisms.

The most complete ancient crossbow to date was discovered in the terracotta army pit one in Xi’an, Shaanxi province. Credit: Chinanews.com

Shen tells China.org, “When we dusted off the sticks, we found three holes equidistant from each other and concluded that they were probably used to hang up ropes that fastened the crossbows when they were not in use.

It was a great way to keep the arch and string in shape and thus maintain their power in the long run.
Besides, Qing was practical to help fix the crossbows during transportation.”

The archaeological site was discovered by chance in 1974, and more than 8,000 life-size clay warriors were uncovered. The clay army lies in the greatest mausoleum in the world, and archaeologists theorize that it was meant to protect Emperor Qin Shi Huang in his journey after death. Each soldier was created with unique characteristics, given individual armor and weaponry, and was placed according to rank. Horses and other objects were also discovered.

In 2013, scientists from the University College London and the Terracotta Army Museum reproduced arrowheads from 200 B.C. when the Terracotta Army was built, and tested them with a crossbow of that period. The results showed that the arrows easily pierced through the armor used in second century B.C. in China, and would have been capable of inflicting a fatal blow.

“These crossbows were two millennia ahead of their time,” said Mike Loades, historian and expert in ancient weapons.

University College London notes the producers of the UK documentary “Secrets of the Terracotta Warriors” wrote on the condition of the weapons as revealed through excavations. They wrote: “Amongst the many new findings, the film reveals the true extent of the site and number of warriors and that the weapons carried by the warriors were full military grade, rather than replicas: they were designed to kill as efficiently in the afterlife as in this one.

New insights into how the figures were made, including revolutionary 3D computer modelling of the warriors' heads, challenges the traditional explanation and changes our understanding of how sophisticated technology and society were in ancient China.”

The well-preserved crossbow sheds light on ancient weaponry and warfare from thousands of years ago. Scientists are looking to fully examine the artifact and establish its shooting range.

As the site is nowhere near fully excavated, it is expected that other astonishing finds will be revealed about the terra cotta warriors and ancient China.

Featured image: Bronze crossbow similar to one recently excavated from the terra cotta army pit at Xi’an, Shaanxi province. This weapon was from a war chariot excavated from the Tomb of The First Emperor, Lintong, Shaanxi Province Qin Dynasty, circa 210 B.C. Representational image only. Credit: Oberlin College of Arts & Sciences
Posted by arclein at 12:00 AM

Great info! I admit, this is a bit late of a response but I stumbled onto this article just today – definitely going into my bookmarks section. Thanks for sharing the info!