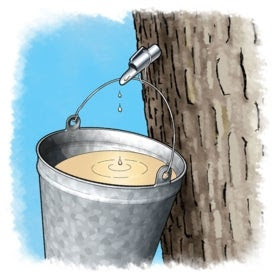 I think that maple syrup has been  insufficiently investigated in terms of culinary art.  That is probably because it has been difficult to supply and it is also costly at around ten per liter or so.  Thus i was pleasantly surprised when is produced a lovely natural frosting by simply combining cocoa powder and maple syrup.  It is easily made and adjusted and it is naturally stable as well.  A cup of syrup and perhaps two cups of powder will make all you need i am sure.

This also strongly suggests that other spices can be blended in ass well.  Recall that the original Aztec blend included hot peppers, likely in the form of powder as well.  We also have mole sauce which includes spices and come cocoa powder.

All this suggests that spice blends can be profitably blended with  any syrup base to allow better temperature control during the initial work with the spices.  It does not take much and it likely produces a better product than a water base initially.

A tasty test from Science Buddies

March 26, 2015 |By Science Buddies
Sweet science: How does heating real maple syrup change its qualities? Find out about the chemistry behind this process--and make some candies along the way!

Have you ever cooked up homemade candy? Maybe from chocolate—or table sugar? Maple syrup is not only deliciously gooey and great on breakfast foods such as pancakes and waffles, it can also amazingly turn into maple candies with a range of textures. For example, it can be made into sticky maple taffy or hard, molded maple sugar candy. Early spring is the time of year when maple producers in North America start to tap their trees and collect the sap to turn it into maple syrup, so it's a perfect time to explore this tasty, fascinating food. In this science activity, you will investigate how the temperature of heated-up maple syrup affects what types of candies can be made from it.

Chemically speaking, maple syrup is a concentrated solution of sugar in water, with many minor flavoring compounds. It is made by collecting sap from certain maple trees and boiling it. The sap contains a lot of sugar, primarily in the form of sucrose, although there are also small amounts of glucose and fructose. The sap is gently boiled until it is the right consistency—not too watery (or the maple syrup could easily spoil) and not too thick (or the sugar in the maple syrup could harden and crystalize).

How does boiling the sap change its consistency? When a sugary solution is heated, some of the water evaporates, and this makes the sugar more concentrated in the solution and the overall product thicker. As the heated maple syrup cools, sugar molecules (the smallest particles of the sugar) can form crystals. The amount of crystals that form depends on how concentrated the sugar is.

This same principle is used to turn maple syrup into different types of sugary candies. To make maple candies, maple syrup is heated more, and this makes the sugar in the candies even more concentrated than it is in the maple syrup!

Cooking oil if using candy molds. If you are using a baking pan, you can use wax paper instead of cooking oil.

Half a cup of pure maple syrup (make sure it is not imitation syrup!)

Place your baking pan or hard candy molds on the counter next to the stove.

Make sure an adult helps and supervises while using the stove and heating the maple syrup. Also be sure to only use a metal measuring teaspoon, because the heated maple syrup can melt plastics!

When you have made your five samples, let them all cool to room temperature and then investigate them. What is the color of each sample? Is it transparent? Does it feel sticky, smooth and/or rough? Does it seem caramelized? Is it flexible, or does it break when bent?

When you are done making your visual observations, try tasting—or having a volunteer taste—each sample. How does each one taste? Which is the sweetest? Which has the best texture? Which one do you like the most overall?

Overall, how does it seem that heating the maple syrup affects the type of candy it can turn into? How are these candies similar to, and different from, maple syrup–based candies that you can buy?

Extra: You could try this activity again, but this time make several samples (at least three) at each temperature you test, and invite friends and family for taste testing. Which samples do other people prefer? Is it always the same, or do some people prefer different aspects?

Extra: Maple syrup is mostly made of the sugar sucrose and water. There are many different types of sugars, and you could design a way to make solutions of these other sugars and similarly test them. Do they make candies similar to the ones made with heated maple syrup?

Just as maple syrup is made by boiling and concentrating sap from trees, maple syrup–based candies are made by heating up maple syrup to concentrate it further. The hotter and longer the syrup is heated, the more concentrated the sugar (and other ingredients) in it becomes as the water evaporates away. This is why you should have seen that the candies made from maple syrup that was heated the longest (to around 270 to 310 degrees Fahrenheit) was the darkest (a light or dark brown color), non-transparent, rough in texture, stiff when you tried to bend them (breaking cleanly), but quite sweet! Meanwhile, the candies made from maple syrup that was not heated as long (to around 230 to 250 degrees Fahrenheit) should have been the most like maple syrup—they should have been honey-colored, transparent, sticky but smooth in appearance, and very flexible, but not super sweet.

When you think about your results, you compare about the difference between the texture of caramels and lollipops—the caramel is softer and chewier, while the lollipop is hard and cracks when it is bitten. The syrup used to make caramels is cooked until it reaches 240 to 250 degrees Fahrenheit, at which point is has an 87 percent concentration of sugar and enters the "firm-ball stage." The syrup used to make lollipops, however, is cooked until it has a 99 percent concentration of sugar (at a temperature of 300 to 310 degrees Fahrenheit), which makes drops of the syrup turn into hard, brittle, easy-to-break threads when placed in cold water.

To clean the saucepan, spoons, stove or other kitchen items that may have gotten hot maple syrup on them, soak them with hot, soapy water and then scrub the remaining maple syrup off.