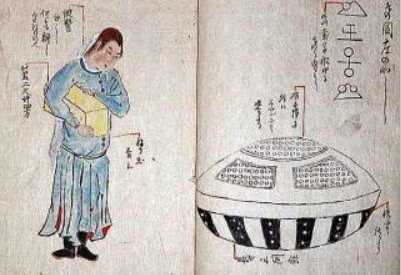 There are scant reports handed down to us from the medieval period regarding what we today call UFO encounters.  These are noteworthy and something unique in each caused their retention.  The Japanese ones appear to have the same message of respect for a supreme being and may well be an insertion.  This still led to the stories been kept.


Add in the Bronze Age reports in the Bible and the reports out of India, we get the same picture of actual communication over all of history.  Our limited textual material merely acts as a sampling device that shows just that.


Such communication is ongoing as well but not visibly studied by any agency that we can recognize.  The actual content reported remains plain vanilla envelop but likely represents a prepared statement.  Where intelligent dialog took place we got important information including a strong confirmation of how gravity can be manipulated.  They are willing to share information.

As reported as well it appears plausible that government agencies do have access and have been pursuing obvious research lines.  However governmental secrecy regimes has stifled the advance of this science.

Date: 460 AD
According to the ancient Japanese manuscript “Nihoni” the Emperor Oho-Hatsuse-Vaka-taka-no-Mikoto had gone hunting in the mountain with bow and arrows when unexpectedly a tall man in a strange cap and tight-fitting clothes descended from the sky. By his face and manner of behavior the Emperor thought that he had encountered “God” himself and decided to ask him who he was. The tall man answered, “I am the God of visible people. You give me your king’s name and I will give you mine’s”. The Emperor answered, “I am—Vaka-Taka-no-Mikoto”. And the tall man gave his name, “Your obedient servant God Hito-Koto-Musi” (which literally meant, “God of one word. Goodness that sprays evil with one word and the good by one word”). He left his “chariot” (spacecraft?) that was emitting light and joined the emperor. Source: Space Visitors in Ancient Japan by Mikhail Rosenshpitz in: “Unbelievable World” # 8 August 2004

Date: 556 AD
A strange man, a visitor from the sky was encountered during the rule of Emperor AMe-Kuni-Osi-Hiroki-Niro-niha and told the emperor when he met him: “In the past during the rule of Emperor Oho-Hatsuse, your country has experienced strong pressure from Korea and was in a quite critical situation. If after a respectful prayer to the divine being—founder of your country—you will help the ruler who is threatened by destruction, the state will then achieve tranquility and peace will be established among nations. Recently I was informed that your country has stopped honoring the Supreme God. If you will now repent of your former sins, and build a temple to this God and make a sacrifice in honor of his divine spirit…your country will flourish. Don’t forget about this.”
Source: Space Visitors in Ancient Japan. By Mikhail Rosenshpitz in: “Unbelievable World”, Kiev Ukraine # 8, and August 2004

Kiev – Local residents observed a strange sign in the daytime sky near the River Setomi in 1065.It was a huge star with blood red beams of light. This phenomenon lasted for 7 straight days. It was seen only during the evening. Around the same time a child-like dwarf type entity was found by fishermen in the river Setomi. (This river does not exist at present). The dwarf was pulled out of the river in a net. The fishermen kept watch over the strange entity until late afternoon and then threw him back into the river out of fear and repugnancy. The dwarf like entity was very strange with a much wrinkled face and other “shameless” details on his face and body that were not specified. Source: “Povest Vremennyh Let” (Ancient Manuscript) and Dmitriy Lavrov (All-Ukrainian News) February 18 1998

Date: 1125
Time: 2300 to midnight
Near the above town witnesses, including one Georg Miltenburger reported seeing a bizarre entity described as resembling a “burning man” or a man of fire. It was seen running over the hills, spitting fire from its nose and mouth. Some said that they could plainly see its burning ribs. It reportedly remained wandering around the mountainous area for quite some time. Source: Michel Bougard, Inforespace # 23, and Jean Ferguson “Humanoids”
Comments: Do we have here a description of an entity wearing luminous clothing and using beams of light that was interpreted in a very primitive and superstitious way?

It was reported that a “dwarf” was captured in the cellar of a German monastery. It was very black and did not speak any known language. He was tied up briefly but the rope was slackened to see what he would do.
He returned to the cellar where he was found and there raised a stone on the ground and disappeared through a tunnel that was sealed with a cross. Source: Jacques Bergier “Extraterrestrials throughout history” 1970

Date: 1173
This village was named after its deep trenches in which wolves were formerly captured. One day local villagers were amazed to see two very unusual children crawling out of one of these trenches. A girl and a slightly younger boy, they were both dressed in strange clothing and spoke an unintelligible language. Their skin color was green. Unable to communicate with them, the villagers took the girl and boy, who were weeping and very forlorn to the home of Sir Richard de Calne a local landowner. Here they remained treated with great kindness. But the boy fell ill and died. Happily however the girl survived and as she grew older her skin’s green hue gradually disappeared. She eventually married a man from King’s Lynn in Norfolk, a senior ambassador of Henry II. During her years in Sir Richard’s household, Agnes learned English and revealed they were from a Christian place called St. Martin’s Land, where much is green and it was always twilight. It was separated from a much sunnier place by a wide river. One day while tending their father’s flocks in a field, Agnes and her brother had been led away by the sound of church bells into an underground realm, and then somehow found themselves in Woolpit. Source: Dr. Karl P. N. Shuker in Fate Magazine May 2001 Thanks to Albert Rosaleshttp://www.ufoinfo.com/humanoid/humanoidancient.shtml
Posted by arclein at 12:00 AM