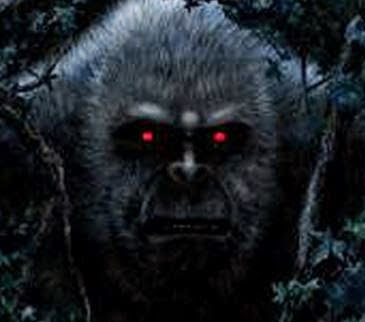 This report is not likely to be a Sasquatch at all.  They tend to break off and disappear pretty quickly.  This creature was seriously territorial.  Thus we do get cases of Sasquatches throwing stones and sticks to scare unwanted guests, it is never this demonstrative.  Those reports could also be not Sasquatches as well.


Unfortunately this encounter failed to produce tracks which would have confirmed that we are dealing with a Sasquatch.


On the other hand, the tracker did sense that it was a 'werewolf'.  That is our friend the Giant Sloth. Its violence and territoriality strongly supports that option.   Regardless this was a dangerous encounter and what they met was not prepared to back down.


With the territory identified, they need to go back and be well armed and careful.  They need to get tracks, although this creature is likely wise to that as well.
.

Sasquatch hunters say they were attacked by bigfoot

The Sasquatch didn't like it when explorers in the Sam Houston National Forest drew too near him last week, and in his fury he hurled giant logs at the curious humans.

That's according to Wes Germer, host of the Sasquatch Chronicle podcast, whose team ventured into the East Texas Piney Woods with the guide of Bob Garrett and sons, a Conroe family of self-declared "cryptozoologists," who have tracked legendary creatures through the woods north of Houston for years, and who document thier findings in various bigfoot blogs.

The expedition didn't photograph the monsters—it seems the Sasquatch is bashful before cameras, as it has never appeared in photo before-- but that doesn't mean the researchers didn't get close to their mysterious subjects.

"My heart was just pounding in my throat," said Germer on his Sunday podcast as he recounted his chilling brush with the unknown giant.

In the early night, the forest was tame as Germer and Garrett sat and chatted in camp while the crew was out exploring with flashlights and night vision goggles. Then the noise came.

At first he said he was upset that one of his team members was making such a racket, and thought it strange that someone would try to navigate without a light. But quickly he noticed the faint glow of the lights far away and all of his team gathered in the distance. Garrett announced: this forest creature wasn't one of them.

Then the giant bolted off, and plowed fiercely through the dense brush with astonishing speed.

"This thing moved so fast, it probably covered 100, 150 yards like nothing," Germer said.

The commotion settled, and Germer estimated the creature was just 30 or 40 feet beyond the tree line of the campsite, but the thicket obscured it entirely. Garrett, a seasoned East Texas tracker, loaded his gun and ducked into the brush to catch a glimpse of the monster. Germer followed, but a glimpse would never come.

Because as the two men neared the spot where they heard the beast lurking, a noise grew in the air, like the beating of helicopter blades coming straight for them.

"And I knew what it was. It was a log coming, and it was a big log, and you could hear it being thrown," Germer said. "And I ducked down because I thought for sure it was going to hit one of us in the head."

The two men were lucky to come out with their lives, and Garrett declared the beast had issued them a warning. But it wasn't the only time Sasquatch threw logs at the unwelcome intruders to his forest domain. Germer recounted a time in the very same trip when a log crashed down into the spot where his girlfriend had sat just moments before.

Garrett also reports multiple instances of Sasquatch log-throwing in the Piney Woods on his blog, Sasquatch Mountain. According to one post, he and his son once took shelter in their truck as it was bombarded by multiple Sasquatches in an abandoned campsite left ransacked by the creatures.

\
"We could hear them run back and forth and the tree limbs and broken trees flew in to camp, nonstop," he wrote in 2014.

In the end, Germer's Texas trip was lush with close encounters. One of his team members and podcast cohosts, Shannon Legro, reported the incredible sound she described as an owl that "went into a monkey."

Germer also witnesses the strange sound, but he reflected on his experience to determine that it didn't have the ring of a Sasquatch, and in fact he doesn't believe it was one. So what could it be? "A freakin' werewolf," he suggest.