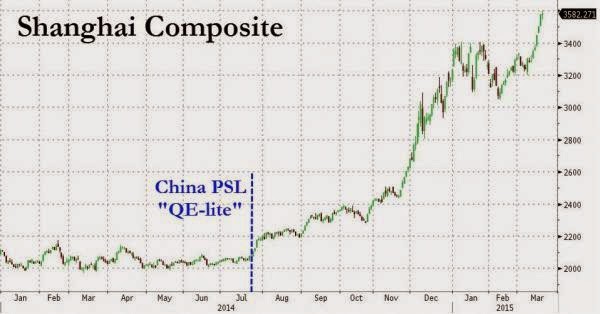 Does anyone really believe this is going to end well?   Huge floods of hot cash have underwritten all this and it has no exit because the assets simply cannot cash flow enough in time to liquidate the debt incurred as in ever.  We are merely waiting for the crushing price contraction.  It will then spill over into the real estate bubble and we will see a  force out at economic levels and that likely means ten cents on the dollar for prime assets.

There is an escape but no one in history has ever truly taken it, so i will not waste time explaining at all.  Besides they needed to start along time ago.  Like in 2008 when they had choices.

I do not know when the shoe will drop but it will also ravage all markets globally.  I suspect that China has dumped huge amounts of its US dollar stock into stocks as well and this has super charged global markets.

As stated i fail to see how this might end well.  This was a classic fiat currency expansion and no other option was ever tried.
.

Earlier this month, we identified the reason why Chinese stocks have continued to rise in the face of overwhelming evidence that the country’s economy is decelerating quickly. While the first part of the 8-month run can be plausibly attributed to PSL, the furious buying that began in late November looks to be at least partly attributable to the fact that thanks to tighter regulations on lending outside the traditional banking system, China’s $2 trillion shadow banking complex needed somewhere to put cash to work and that somewhere turns out to be the giant bubble that is the SHCOMP. Here’s more:

Because according to Reuters, it is precisely China's trust firms, with total assets of $2.2 trillion, and who together with Banker Acceptances comprise the bulk of China's shadow banking pipeline, and no longer able (or willing) to lend to China's small companies and individuals due to a spike in regulation, are shifting more cash into frothy capital markets and over-the-counter (OTC) instruments instead of loans.

In other words, instead of using their vast cash hoard of over $2 trillion to re-lend and stimulate China's economy, China's unregulated, shadow banking conduits are now directly buying stocks!

Shortly thereafter we highlighted the 7 main reasons for the Chinese stock ramp all of which boil down to one thing: liquidity. Here they are, courtesy of UBS:

With no significant change in China's macro or corporate fundamentals, the visible rebound in China's A-share market since November appears to have been largely liquidity driven. We think this, in turn, may have been fuelled by a number of factors including:

2. banks' bridge loans provided to investors who lost access to other high-yield shadow banking products as the result of tighter regulation;

4. the official launch of Mutual Market Access (MMA) between the Hong Kong and Shanghai exchanges;

5. long-term expectations for SOE reform and A-shares entering the MSCI index next June;

6. increased use of leverage by retail investors via margin trading; and

Meanwhile, China’s securities regulator warned investors that not wanting to miss out on the next leg up is not a good investment strategy to follow, especially in a market as frothy as this one. Now, BNP is out with a note calling China’s equity bubble “a microcosm for the overall economy: unsustainable growth in leverage masking ever-deteriorating fundamentals and increasing future downside risks.” Here’s more:

Against all odds, the best performing asset class on the planet over the last nine months or so has been Chinese equities…

What underlies these extraordinary gains? It is certainly not economic fundamentals. Led by the accelerating real estate slump (China: It’s Only Just Begun), China’s GDP growth has steadily slowed with reported 2014 GDP growth of 7.4% the slowest in almost twenty years. A range of ‘hard’ economic indicators such as electricity production and rail cargo volumes suggest even slower growth. Our preferred ‘real, real’ GDP estimate flags that output growth could have been as low as c.4½% in 2014 (China: Fit as a Fiddle). While the usual data fog around the Lunar New Year partially clouds analysis, high frequency indicators that generate early estimates of GDP growth suggest that the growth has continued to slide in 2015Q1…

By definition therefore equities’ stellar performance has been a function of liquidity driven multiple expansion. The P/E ratios for the Shanghai and Shenzhen markets have roughly doubled since August to c.19x and c.44x respectively. While still a long way short of the incredible highs of 70-80x reached during the 2006-2007 bubble, multiples are now rapidly approaching their post-GFC highs. One obvious source of fresh liquidity which could have powered equities’ bull-run is from the long-delayed introduction of the Hong KongShanghai ‘stock connect’ last November. The scheme, formerly known as ‘the through train’, allows two trading between the Shanghai A-share market and the Hang Seng. Two-way flows however have been relatively meagre. An initial aggregate quota of RMB300bn was set for northbound flows into Shanghai. So far only about a cumulative RMB125bn has flowed north, leaving RMB175bn of the aggregate quota unfilled. And northbound buy orders have in turn typically only accounted for around ¾% of the Shanghai market’s daily turnover…

...and it comes from a predictable place, leverage…

Far from a surge in external liquidity, an increasingly self-feeding domestic frenzy fuelled by leverage appears to be the key driver….Margin purchases have been running well ahead of redemptions ensuring that the outstanding stock of margin debt has ballooned by over RMB1 trillion since August; equivalent to more than 1% of GDP…

Margin purchases are now accounting for almost 20% of equities daily turnover which itself has soared to wholly unprecedented levels in another sign of self-feeding speculative frenzy. What happens next is clearly an ‘unknown-unknown’. By definition detached from fundamentals, speculative bubbles are inherently re-enforcing in the short-term and frequently last longer than expected. The longer they continue, however, the larger the eventual bursting.