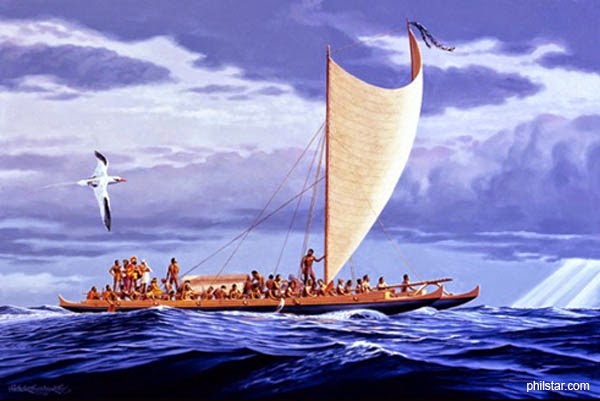 What is missing in this whole equation is a grasp of Indonesia and the South China Sea as a continental archipelago a mere 13,000 years ago and its steady inundation lasting several thousands of years until around four thousand years ago.   During this period of innundation global seamanship evolved to culminate in the Atlantean Bronze Age 3000BC through 1159 BC that touched almost everywhere and certainly shared core technology.

It is reasonable to expect extensive ties and genetic mixing throughout the archipelago that include even Taiwan. This is were the populations were concentrated then.  Thus genetics of the pol,Polynesians  needs to be thought out.  A likely scenario is some successful population began sending out colonies.  I would like to see a population base of ten thousand exploiting a rich fishery using mostly stone age technology.

We had exactly that along the Pacific Northwest so we know this is likely.  In short check the likely fisheries..

Research into the origins and dispersal of Polynesian chickens has helped scientists reconstruct the early migrations of the Polynesians and the animals they carried with them. The results revealed that the Philippines is the most likely ancestral homeland of the Polynesians, whose forebears colonised the Pacific about 3,200 years ago.

Polynesian seafarers explored vast areas of the Pacific and settled nearly every inhabitable island in the Pacific Ocean well before European explorers arrived in the 16th century. However, the ancestral relationships of people living in the widely scattered islands of the Pacific Ocean have long puzzled anthropologists. The predominant theory is that the Polynesian people are a subset of the sea-faring Austronesian people who have their origins in Taiwan, having arrived there through South China about 8000 years ago. From there it is believed that the spread out across the Pacific to Polynesia, a sub-region made up of over 1,000 islands scattered over the central and southern Pacific Ocean.

It is thought that by roughly 1400 BC, the ‘Lapita People’, so-named after their pottery tradition, appeared in the Bismark Archipelago of northwest Melanesia. This culture is seen as having adapted and evolved through time and space since its emergence "Out of Taiwan". Within a mere three or four centuries between about 1300 and 900 BC, the Lapita archaeological culture spread 6,000 km until it reached as far as Fiji, Tonga, and Samoa.

However, the belief that the Lapita people are related to the Polynesians has long been debated, and direct links between Lapita and mainland Southeast Asia are still missing, due to a lack of data in Indonesia and Malaysia.

The face of Mana, a Lapita woman whose face was reconstructed using a model of her skull which was excavated from an early human settlement at Naitabale in Fiji. Photo source.

In the latest study published in the American journal Proceedings of the National Academy of Sciences, an international team of researchers led by Alan Cooper, director of the Australian Centre for Ancient DNA (ACAD), at the University of Adelaide used ancient DNA to study the origins and dispersal of ancestral Polynesian chickens. They found that Polynesian chickens had their genetic roots in the Philippines, making that region a candidate for the homeland of the mysterious Lapita people who transported the domesticated birds to the Pacific islands.

"We don't find this [genetic] signature anywhere else in the world except in the Philippines and neighbouring areas," said Professor Cooper.

However, he also stressed that the Philippines could merely have been a stopover point for the ancient mariners. Further research is now been conducted on modern chickens in Southeast Asia to see where the genetic trail leads.