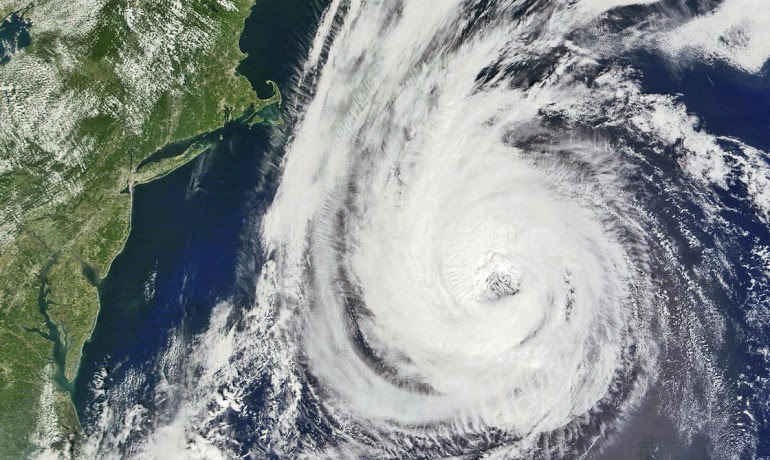 The serious take home here is that the Atlantic Seaboard needs to be Hurricane proofed.  That means many things.  The best solution will be to grow barrier reefs everywhere possible.  This also controls sand erosion as well.  Once fully built up they will break the weight of most storm surges unless extremely unlucky.  The same needs to be done on the Gulf coast as well.


The impact has been sorely under estimated due to a now obvious quiet period which is showing signs of ending.


Other than that we need to charge insurance commensurate with the newly appreciated risk.  This may drive new building onto higher ground over the long term and should be geared to do so..

On September 11, 2001, Hurricane Erin was making her way northward in the Atlantic Ocean. In this MODIS image, the storm stretches from the latitudes of Virginia in the south, past Massachusetts's boot-shaped Cape Cod, and on up to Maine. (Credit: Jacques Descloitres/MODIS Land Rapid Response Team/NASA/GSFC)

Ancient sediments from a coastal pond in Cape Cod, Massachusetts, show that enormous storms have battered the region for 2,000 years.

The hurricane strikes deposited a distinct layer of sand mobilized from the adjacent beach.

The analysis, published in the journal Earth’s Future, suggests some of the hurricanes would have dwarfed recent storms like Hurricane Sandy in 2012 that caused $65 billion in damages.

“These core sediments act much like a commercial bar code you might find on an item at the grocery store,” van Hengstum says. “We were able to ‘read’ the sediment core and found evidence of 35 hurricane strikes.

“Importantly, there are two periods of very intense storm activity in the Cape Cod area, from 150 to 1150, and again from 1400 to 1675, unlike anything we have observed during the instrumental record.”

The storms were likely more intense than almost any storm ever seen in the Cape Cod area, including Hurricane Bob in 1991 and an unnamed storm that hit the area in 1635 and caused storm surges of at least 20 feet, van Hengstum says.

The sediments indicate there was also a period starting in about 1400 that lasted until 1675, when storm activity increased significantly.

An intense storm pounded the Northeast about every 40 years or so, and most of these would be classified at least as a Category 3 or Category 4 storm—storms that would totally devastate New England if they hit today. By comparison, Hurricane Sandy was a Category 1 storm with winds of 80 miles per hour when it made landfall.

“This period of elevated hurricane frequency and intensity perhaps provides a clue into future hurricane activity in our warming climate.”“The period of time from 1400 to 1675 AD was particularly interesting because it coincides with previous evidence for warming in the upper Atlantic Ocean off the North Eastern Seaboard,” van Hengstum says.

From a coastal risk perspective, US emergency officials should consider a plan involving a major hurricane—at Category 3 or higher intensity—every 30 to 40 years instead of every 100 or 200 years as currently believed.

Researchers from University of Texas at Austin, Woods Hole Oceanographic Institution, University of North Carolina-Wilmington, University of Massachusetts-Amherst, and University contributed to the study that was funded in part by the Dalio Explore Fund and the National Science Foundation.