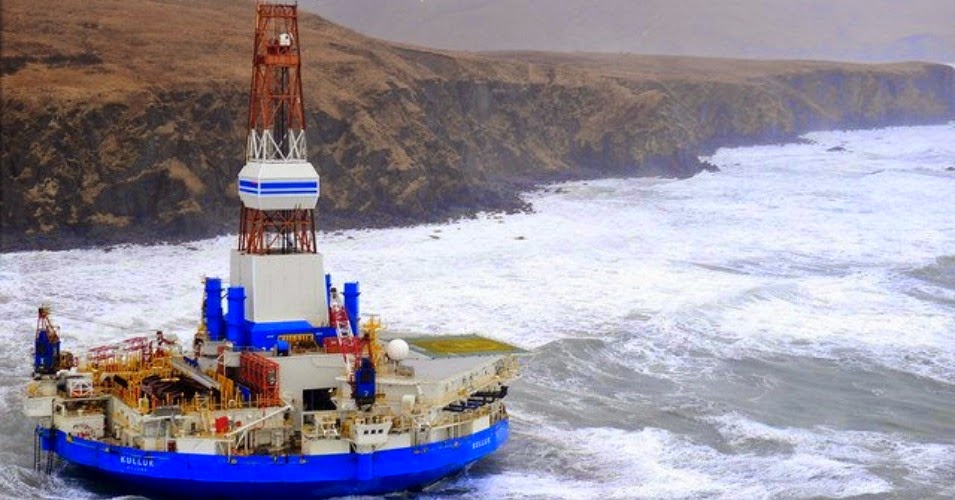 I personally oppose drilling and developing oil in the Arctic. The reason for that is that it is way too extreme and we are moving from barely possible to implausible. These seas become ice covered. It will not be possible to divert a thick ice slab away from a fixed facility. That leaves only sub-sea production systems into buried pipelines onto land. Add in the painfully short seasons that actually last about a month to two months and it has to be the most expensive oil on Earth.

There are still options but so is building a bridge to Siberia from Alaska.  So why are we doing this when we will not approve a very economic and vastly safer Keystone pipeline.  His enviro concerns are proven to be an utter lie.

I wonder if it will actually happen?

Department of the Interior ignoring its own report on threat to climate, say environmental groups
by
Nadia Prupis, staff writer

Thanks to a government ruling on Tuesday, Shell may soon be able to continue drilling in the Arctic, despite risks to the environment and animals who live there. (Photo: Day Donaldson/flickr/cc)

Environmental activists expressed shock and outrage on Tuesday after the U.S. Department of the Interior upheld a 2008 lease sale on the Arctic's Chuchki Sea, opening the door for continued oil exploration in a region long eyed for drilling by Shell Corporation and increasingly strained under the effects of climate change.

The decision opens up 30 million acres in the Chuchki Sea to fossil fuel exploration and drilling, a move which state and national green groups called "unconscionable."

"Our Arctic ocean is flat out the worst place on Earth to drill for oil," said Niel Lawrence, Alaska director of the Natural Resources Defense Council. "The world’s last pristine sea, it is both too fragile to survive a spill and too harsh and remote for effective cleanup."

In January 2014, the Court of Appeals for the Ninth Circuit ruled that the Interior Department had violated the law when it sold those 2008 leases—a deal that came about during George W. Bush's presidency, but was upheld two years later by the Obama administration.

The 2014 decision ordered the Interior Department to reconsider the leases. A month later, the department admitted that drilling in the Chucki Sea was likely to have devastating consequences, with a spill risk of 75 percent or more.

"It is unconscionable that the federal government is willing to risk the health and safety of the people and wildlife that live near and within the Chukchi Sea for Shell’s reckless pursuit of oil," said Marissa Knodel, a climate campaigner with Friends of the Earth. "Shell’s dismal record of safety violations and accidents, coupled with the inability to clean up or contain an oil spill in the remote, dangerous Arctic waters, equals a disaster waiting to happen."

"Ignoring its own environmental review, the U.S. Department of the Interior has opened the door for drilling in the remote and iconic Arctic Ocean," said the Sierra Club on Tuesday.

"It's shocking that the Department of the Interior would knowingly move forward with a plan that has a 75 percent chance of creating a major spill in the Chukchi Sea. We can’t trust Shell or any other oil company with America’s Arctic," Cindy Shogan, executive director of the Alaska Wilderness League, added. "Shell has proposed an even dirtier and riskier Arctic drilling program for this summer. The Obama administration has seen the impacts of what a major oil spill looks like."

The Bureau of Ocean Management will next conduct an environmental assessment on Shell's exploration plan for the Chuchki Sea, which could take 30 days or more.

The Chuchki Sea is home to an estimated 2,000 polar bears and serves as the feeding grounds for migratory gray whales.

"The industrial oil development that Interior hopes will flow from its decision to approve the Chukchi lease sale gives us a 75 percent chance of a large oil spill and a 100 percent chance of worsening the climate crisis," Rebecca Noblin, Alaska director for the Center for Biological Diversity, added. "I don’t like those odds."
Posted by arclein at 12:00 AM