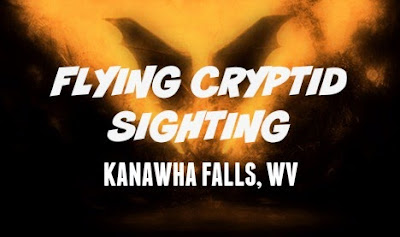 It is our conjecture that the pterosaur  spends a lot of time in water.  Here again we have one close to water and with apparently leathery wings.  Assuming that its head and neck is tucked back as some birds do, we produce these observations easily enough.


Its flying ability is definitely odd and needs reflection.  On a glide path appears our best choice now, except what is described is plausibly too nimble.


We have now received a fair number of credible pterosaurs sightings and we can sense some shape to it all.  I suspect that this creature is nocturnal and seriously aquatic.  It hides out in deep water during daylight and then uses its flying ability at night to search for another fishing hole.  The creature is large and uses a large range making sightings seriously rare.

I received the following report from a man in Greensboro, NC earlier this week:

In September 2014 I was visiting friends in Fayette County, West Virginia. I once lived there when I was boy and this was the first time I had been back since I left for college in 2005.

My favorite pastime back then was to fish the Kanawha River, especially near the falls and up river in the deep water.

On my way home, I stopped off the point downriver from the falls and walked around. It was overcast and starting to turn to dusk. As I looked upriver towards the falls I saw something flying over the river near the opposite bank. It was flying south along the bank over houses and the railroad tracks, then it banked and turned towards my direction. The closer it got to me I started to realize how large it was.

The body was black and was shaped like a cylinder tapered to a pair of short legs. The feet were tucked up so I was unable to describe those. It didn't have much of a tail that I could see. The wings were wide and broad, but I never saw it flap. It was floating and barely moving the wings. It was the strangest thing I've ever seen. As I thought about it later the wing span was at least 20 feet. The texture was similar to leather though the low light made it difficult to see. I couldn't see a defined head or other features as it flew above me and beyond the trees.

I wasn't scared but amazed. I can't even give you an idea of what this was. I never heard any sound.

I didn't see it again. A week later I called my aunt who lives upstream from the falls and mentioned it to her. She said that she had never heard anything about large birds. I'm not sure this was an actual bird because it didn't fly like one. It seemed to propel by other means.

Can you provide any information? I appreciate you taking the time to read this. Cameron

NOTE: I was able to talk to Cameron on Wednesday. He couldn't recall any further information, but I'm convinced that the size of the unknown flying being was quite extraordinary. If the wings had a 20 ft. span I'd speculate the body was at least 5 ft long according to the description. I'm not going to jump to any conclusions since there were some unique characteristics to this cryptid as opposed to other flying beings by comparison. Lon
Posted by arclein at 12:00 AM