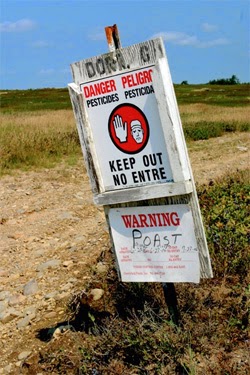 Before anyone even gets to good old glyphosate we really need to talk about pesticide safety generally. Most of these chemicals are absorbed through the skin and indirectly as vapor in the atmosphere. Thus it is almost impossible for farm workers to avoid toxic levels.


Worse, the damage is typically done internally to tissues tasked with processing these chemical.  This way the effects arise many years later.  Thus we are observing early deaths among farmers much younger than has been common and usually from cancer.  This shift has been partially masked by their predecessors heavy use of tobacco.

Thus if avoidance is not an option a breathing device, a hazmat suit is actually called for.  However you then have a treated field that you must avoid also.  No farmer wants to do any of this.

The only effective solution is converting over to organic methods and that has only begun.

I had not fully understood just how bad it all was .

Pesticides are inherently toxic materials -- they are developed and used to destroy or prevent growth or infestations of unwanted insects, plants, and other pests in agricultural, commercial, industrial, and household settings. Farmworkers, and especially those who mix and apply pesticides, face greater risks of becoming poisoned by pesticides because they work with pesticides at their greatest concentrations and strengths.

Pesticide exposure causes farmworkers to suffer more chemical-related injuries and illnesses than any other workforce in the nation. Workers who mix, load or apply pesticides can be exposed to toxic pesticides due to spills, splashes, defective, missing or inadequate protective equipment, direct spray, or drift. Workers who perform hand labor tasks in areas that have been treated with pesticides face exposure from direct spray, drift or contact with pesticide residues on the crop or soil. Farmworker families can also be injured by pesticides when farmworker children play in treated fields; when workers inadvertently take home pesticide residues on their hair, skin or clothing; or when pesticides drift into residences, schools and other areas located near fields.

The exact number of workers injured each year by pesticides is unknown, because there is no national surveillance system for acute pesticide illness reporting and no surveillance system for tracking chronic illness related to pesticide exposure. 30 states require health professionals to report suspected pesticide poisoning, but many incidents go unreported due to a number of factors, including workers’ failure to seek medical care, workers seeking medical care in Mexico, medical misdiagnosis, and health provider failure to report. Factors deterring farmworkers and their families from seeking medical care for pesticide illness include lack of health insurance, language barriers, immigration status, cultural factors, lack of transportation, lack of awareness of or exclusion from workers’ compensation benefits, and fear of job loss.

The U.S. Environmental Protection Agency estimates that 10,000-20,000 farmworkers are poisoned on the job due to pesticide exposure. Several states, e.g., California and Washington State, have state incident reporting systems. In California, in 2009, there were a total of 916 reported cases which were found to be possibly, probably or definitely related to pesticides. Of those 916 cases, 252 (28%) involved agricultural workers. A recent study of acute pesticide poisonings between 1998 and 2005 among agricultural workers in the United States found that an average of 57.6 out of every 100,000 agricultural workers experience acute pesticide poisoning, illness or injury each year. This number excludes the many workers who suffer chronic health problems such as cancer, infertility, and neurological disorders, including Parkinson’s disease, as a result of these toxic exposures.
Posted by arclein at 12:00 AM