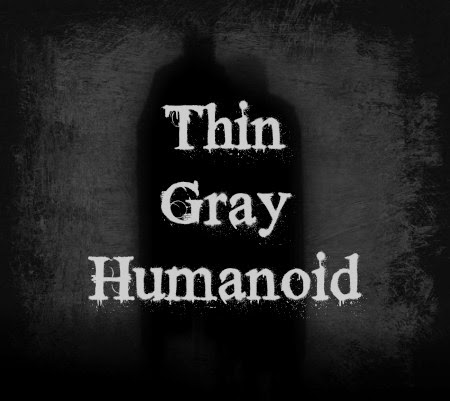 This is different in that there is no plausible way that this could be faked by a physical human.  I am inclined to think that this was a spirit body made visible by the natural reflected light of the moon.  All the red end of the spectrum is missing allowing an easier perception of the blue.  This would otherwise be recognized as a ghost.  It obviously skedaddled when it became aware that the observers were seeing it.

This was well observed also chasing away any doubt.  They really saw it.

Most reports are actually quite physical and are of strange creatures.  Thus i think that spirits remain a minority phenomena generally because of this difficulty in seeing them.  Here we actually had perfect conditions.

I recently received an interesting report from a new reader:

Hello, I recently discovered your site and have been following it for the past couple weeks. I just read your post of April 2 "The Men In Black Mystery" and I'm completely jarred by the similarity of one eyewitness account to something I saw a few years ago. I've rarely spoken about it simply because it was so singular and difficult to describe, and I've never heard about anything even remotely similar until just now.

This happened in Montrose, Colorado in 2012. I was staying with a friend, who lived in a house perched on the edge of Spring Creek Mesa overlooking the town. The view of the town lights was beautiful, so we liked to go for walks at night whenever I stayed there. Her house was surrounded by farm fields and had just one close neighbor, so it was very quiet and peaceful at night. There's a tiny dirt road that runs along the edge of the mesa, towards the homes of the farmers who own the fields, and that's where we would walk. Just a few feet to the side of the road, the ground drops off steeply, and slopes down about a hundred feet. The hillside is very rocky and covered in trees and bushes. Not something you'd want to find yourself rolling down if you went too far in the dark, so we usually only walked when the moon was out.

On this particular night the moon was full and so bright that we commented on how it was practically daylight. We hadn't gotten far from the house, when I noticed something standing on the left-hand side of the road, no more than thirty feet ahead. I knew my friend saw it too because we both froze. I could see it clearly thanks to the moonlight and how close it was, but I struggle to describe it. It was four, maybe 4 1/2 feet tall, and had a somewhat humanoid shape, with a distinct head, torso, arms and legs, but it was narrower than a person, and the legs were disproportionately short while the rest of the body parts were freakishly elongated, even the head. It seemed to be matte gray all over and had no features whatsoever. No face, no hair, nothing. But the most alarming thing was, it was so thin that it looked like a suit of clothes on a hanger; it had a shape from the front, but from the side it was practically paper thin. I got a look at it from the side because moments after we caught sight of it, it turned and crossed the road in front of us. I can't think of an accurate way to describe how it moved. The legs moved a little, but it didn't seem to take steps, there was no up and down motion; it glided almost fluidly across the road and over the edge of the mesa. I was so shocked that I can't remember if it made any noise as it headed down the hillside with all its bushes and loose rocks. A few seconds later, my friend and I looked at each other and said "Did you see that?" almost simultaneously. Then we just turned and ran like hell back to her house.

I'm completely at a loss to surmise what this thing may have been. The visual is firmly imprinted in my memory, especially that unbelievable thinness, and I haven't heard tell of anything similar until I read the former mail carrier's story about the things they encountered in D.C. While the sightings were 1600 miles apart, and the thing I saw wasn't wearing any garments, the description of their total flatness stood out to me instantly. I'm wondering if anyone else has ever seen anything like this. E