Baffling 'Y' Shape on Venus May Finally Be Solved 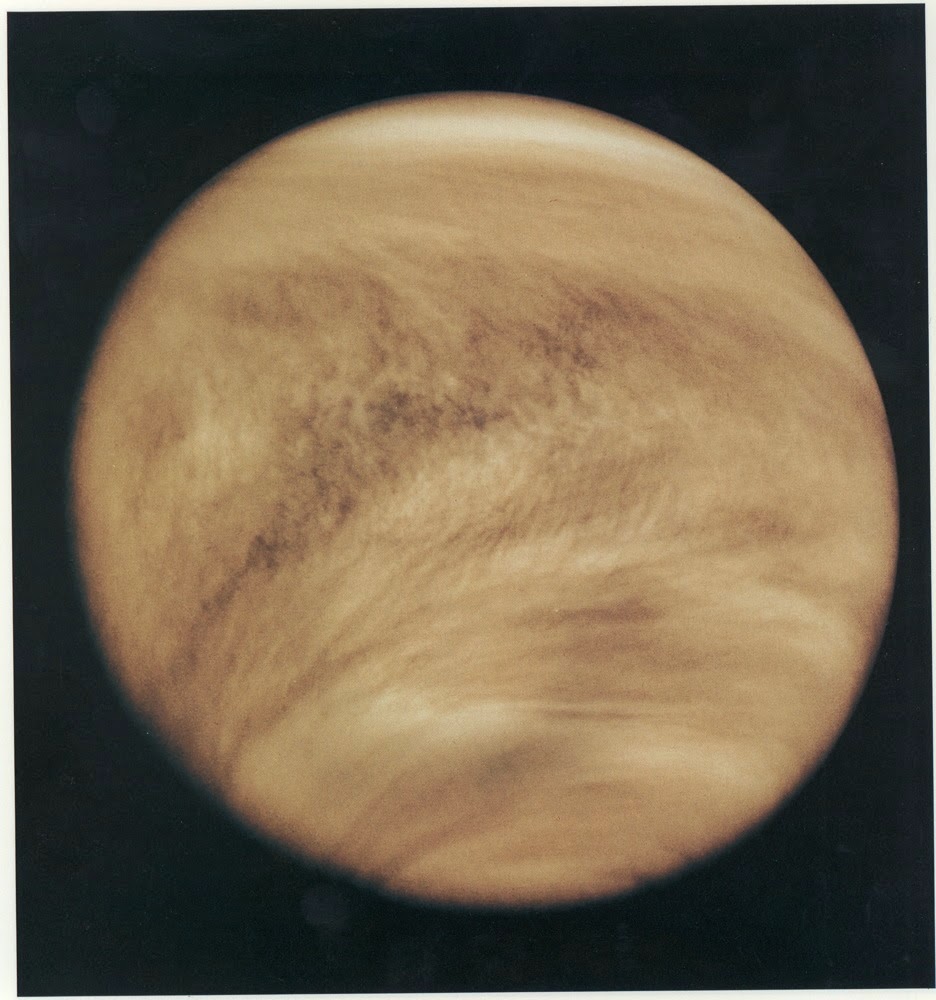 The best interpretation is centrifugal forces produced by the atmosphere itself.  This additionally causes upwelling of material that then colors the observed structure.

Thus we are somewhat further ahead but not too much.  Modeling needs to also master atmospheric rotation as well if it has not been done yet.  The understanding will apply elsewhere.


As i have posted before, I expect that  Venus will be ultimately terraformed.  It will not be like Earth because the Moon and its four billion years of kneading will not be possible.  What can be done is to inject water to produce shallow seas and extensive monsoon conditions allowing a blanket of vegetation.  The hard part though will be to stabilize the surface rock temperature.

Baffling 'Y' Shape on Venus May Finally Be Solved

The strange mystery of the giant "Y" seen in the skies of Venus for more than 50 years may be solved at last: This colossal oddity may be caused by a new kind of wave

in the solar system, scientists have found.

Venus has long been mysterious to astronomers because thick clouds hide its surface. Unexpectedly, when scientists tried learning more about this world by looking at it in ultraviolet wavelengths of light, they discovered a dark anomaly shaped like a Y whose stem rests along the planet's equator. This huge structure nearly covers the entire planet, with arms more than 10,500 miles (17,000 kilometers) long and a stem about 11,900 miles (19,200 km) long.

The so-called "Y feature" has puzzled researchers since its discovery more than a half-century ago. At first, scientists thought it was simply a group of clouds blowing in the wind. However, data from NASA's Mariner 10 mission in 1973 revealed the structure not only moved like a single entity, but also traveled at a different speed than its environment.

The dark structure is made of a still-unknown compound that absorbs ultraviolet radiation, obscuring the areas where it gets concentrated. Tracking its movements helped investigators discover the "super-rotating" nature of the Venusian atmosphere. While Venus takes 243 Earth days to complete a spin on its axis, making it the slowest-rotating planet in the solar system, the atmosphere of Venus spins more than 60 times faster than the planet's surface, the most extreme case of super-rotation in the solar system.

Scientists have long thought the Y feature was caused by waves in the atmosphere of Venus. Interacting waves can theoretically generate all kinds of strange geometric features, such as the giant hexagon circling Saturn's north pole. However, until now, no model of Venus could reproduce how the Y feature originates and evolves.

"Sometimes I dreamed of the idea of being able to solve some of Venus' mysteries, and the Y feature was certainly one of the most challenging!"lead study author Javier Peralta, a planetary scientist at the Institute of Astrophysics of Andalusia in Granada, Spain, told Space.com.

Now, Peralta and his colleagues find that a new kind of wave never seen before in the solar system might have created this dark structure. They detailed their findings online Feb. 6 in the journal Geophysical Research Letters.

When a planet spins, masses of air on its surface will appear to deviate on curved paths, a phenomenon known as the "Coriolis effect." This phenomenon influences the degree to which wind patterns such as hurricanes will whirl. Previous research suggested that atmospheric waves based on the Coriolis effect could help create the Y feature. However, because Venus spins very slowly, "the Coriolis effect is negligible on Venus," Peralta said. This meant the researchers needed to find a new kind of wave to explain the Y feature.

Instead, Peralta and his colleagues found that centrifugal forces may create the Y feature. Centrifugal forces are the apparent forces that draw items on a rotating body away from the center of rotation. For instance, centrifuges are machines that spin, resulting in denser substances moving outward.

The researchers found this new wave can make the as-yet-unknown ultraviolet-light-absorbing material on Venus well upward. This explains the dark color of the Y feature.

This new wave also can explain the bizarre shape of this dark structure. In the region stretching from the equator of Venus up to its middle latitudes, there is a strong wind that blows westward at more or less constant speeds. However, at higher latitudes near the poles of Venus, winds swirl more quickly. These differences mean "the wave gets gradually distorted," leading to a Y shape, Peralta said.

In addition, this new wave is confined not only to the equator of Venus, but also to the altitude where atmospheric winds are most intense, around the cloud tops of Venus. This could explain why the Y feature is only seen in a narrow range of altitudes no more than about 5 miles (8 km) in height.

These findings could shed light on the way other slowly rotating planets behave. "We expect that the number of slowly rotating exoplanets will shortly increase, and we already provided a list of up to 20 plausible candidates previously," Peralta said.
Posted by arclein at 12:00 AM