The Elephant Whisperer with Lawrence Anthony 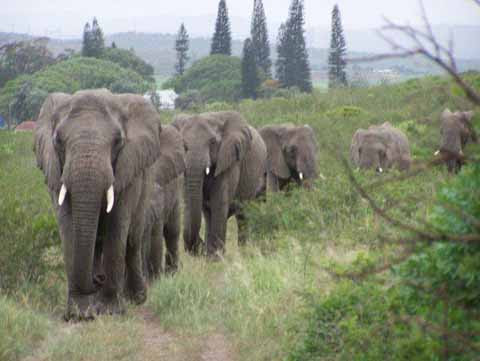 I have just finished reading this book and it truly informs.  We have already posted somewhat on elephant communication with humans and more critically among themselves. This book beefs up the evidence substantially to the point where a number of conjectures can be proposed.  I will do this separately under animal consciousness.

Sadly Lawrence himself has passed.  Fortunately his work continues and possibly his plan to create a larger preserve will see fruition.

His book clearly tracks multiple expressions of elephant mind to mind perception including last not not least their attendance on this death in morning.

I do think that the elephants themselves can be saved  and successfully integrated into a human centered life way before we are finished.  This books shows us a lot of how it may be done..


"Anthony has made a difference in the lives of many magnificent animals who otherwise would have been lost to the world. When you're feeling down and out and defeated and ready to give up, read this inspiring book and share it widely with others."
--Marc Bekoff, author of The Emotional Lives of Animals
"In my thirty-five years of studying man/animal communication I have met only a few individuals who have the ability to enter into the metaphysical realm of the exotic animal. Lawrence Anthony has been there and back. His wonderfully written book The Elephant Whisperer is a true reflection of his ability to be one of the pachyderms."
--Ralph Helfer, author of Modoc
"A lovingly written tale of close encounters, some beautiful and some frightening, with humans and nonhumans alike. Anthony's story of his trials and tribulations in preserving a herd of African elephants is a parable for the continent."
--Irene M. Pepperberg, author of Alex & Me
"An engaging and vividly personal account, The Elephant Whisperer invites you in, as confidant and confederate, from the first page and holds you rapt to the very last. A compelling reminder of the power and mysteries of the natural world, Thula Thula's elephants are lucky to have a friend like Lawrence Anthony."

--Amelia Thomas, author of The Zoo on the Road to Nablus
About the Author

LAWRENCE ANTHONY is an acclaimed conservationist and founder of The Earth Organization. He received the UN’s Earth Day award for his work in Baghdad. He lives in Zululand, South Africa.

GRAHAM SPENCE is a journalist and editor. Originally from South Africa, he lives in England. Together they also wrote Babylon's Ark: the Incredible Wartime Rescue of the Baghdad Zoo.


“The Elephant Whisperer is every bit as much a page-turner as a novel. … Anyone who remembers Born Free, a personal story of tamed East African lions, will hope this book, too, is destined for the screen.”
—San Francisco Book Review

For 12 hours, two herds of wild South African elephants slowly made their way through the Zululand bush until they reached the house of late author Lawrence Anthony, the conservationist who saved their lives.

The formerly violent, rogue elephants, destined to be shot a few years ago as pests, were rescued and rehabilitated by Anthony, who had grown up in the bush and was known as the “Elephant Whisperer.”

For two days the herds loitered at Anthony’s rural compound on the vast Thula Thula game reserve in the South African KwaZulu – to say good-bye to the man they loved. But how did they know he had died March 7?

Known for his unique ability to calm traumatized elephants, Anthony had become a legend. He is the author of three books, Baghdad Ark, detailing his efforts to rescue the animals at Baghdad Zoo during the Iraqi war, the forthcoming The Last Rhinos, and his bestselling The Elephant Whisperer.

There are two elephant herds at Thula Thula. According to his son Dylan, both arrived at the Anthony family compound shortly after Anthony’s death.

“They had not visited the house for a year and a half and it must have taken them about 12 hours to make the journey,” Dylan is quoted in various local news accounts. “The first herd arrived on Sunday and the second herd, a day later. They all hung around for about two days before making their way back into the bush.”

Elephants have long been known to mourn their dead. In India, baby elephants often are raised with a boy who will be their lifelong “mahout.” The pair develop legendary bonds – and it is not uncommon for one to waste away without a will to live after the death of the other.

But these are wild elephants in the 21st century, not some Rudyard Kipling novel.

The first herd to arrive at Thula Thula several years ago were violent. They hated humans. Anthony found himself fighting a desperate battle for their survival and their trust, which he detailed in The Elephant Whisperer:

“It was 4:45 a.m. and I was standing in front of Nana, an enraged wild elephant, pleading with her in desperation. Both our lives depended on it. The only thing separating us was an 8,000-volt electric fence that she was preparing to flatten and make her escape.

“Nana, the matriarch of her herd, tensed her enormous frame and flared her ears.

“’Don’t do it, Nana,’ I said, as calmly as I could. She stood there, motionless but tense. The rest of the herd froze.

I felt her eyes boring into me.
Posted by arclein at 12:00 AM