Attempt to Silence and Intimidate Doctor Oz has Spectacularly Backfired. 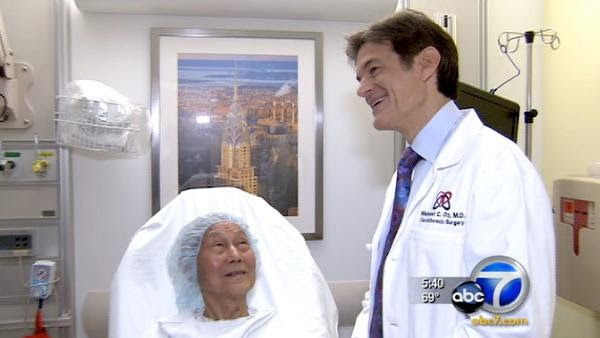 I had little expectation that the scurrilous attack on Dr Oz would do more that wrap fish in a week or two.  However it was so ill conceived that it earned real push back from Dr Oz who after all has his own bully pulpit to beat lazy reporters into submission.


What it has done is make the Biotech propaganda department the issue.  These folks have been shameless liars forever right back to day one with Roundup and the Tobacco industry.  Add in sophisticated manipulation by media savvy operators and here we are today trying to take down Dr Oz, not for some of his so so nutritional enthusiasms but because he actually dared to not support GMOs.


Their purpose is the delay the inevitable as long as possible while obfuscating the bona fide science.  Think about that.  They knew roundup generated cancer at least fifty years ago just as they knew tobacco produced lung cancer in the 1920's.


Their business plan naturally calls for maximizing profit into every possible market as long as possible until real statistics of cancer deaths are sorted out and become compelling to even the ignorant.


Every heavy smoker my own age that i knew over the years has now passed.  Every industrial farmer my own age group that i knew has also passed from rare internal cancers of some sort.  This is a long way from been over also.  Other countries are now doing their own due diligence and they cannot shut them all up.  Last week the union of doctors came out against Roundup in the Argentine..


The biotech mafia's attempt to silence and intimidate Doctor Oz has spectacularly backfired.

Yesterday, Oz aired a courageous investigative episode that looked into the criminal backgrounds and conflicts of interest of those 10 doctors who attacked him.

What he found will blow your mind: Felony fraud, ties to Big Tobacco, industry front groups and a total failure of the mainstream media to investigate the real truth:

Why does Washington Post, USA Today, NPR and the AP get its 'science' talking points from a convicted felon who went to prison for Medicaid fraud?

(NaturalNews) In recent days, Columbia University's School of Journalism announced its 2015 Pulitzer Prize winners, and the list contained many of the usual suspects.

The New York Times picked up a couple more awards for a political corruption story, Ebola coverage and international reportage; The Wall Street Journal won for an investigative hit piece against healthcare providers who manipulate Medicare; the Los Angeles Times won for reporting how the state's extreme drought has affected the "human condition"; a smaller South Carolina paper won a prize for reporting violence against women; the St. Louis Post-Dispatch picked up a Pulitzer for photography during the Ferguson riots; some guy won the Poetry Pulitzer for revealing the "scope of African-American experience" through poems that drew from "slave narratives."

And so forth. In other words, these mainstream papers "went after" stories where reporters and editors had already decided the outcome, and as usual, Columbia University rewarded their pre-conceived orthodoxy as members of the journalistic "cool kids club."
Dr. Oz no longer a "cool kid"

Why does this matter? Because it helps explain how a man like Dr. Oz could be so savagely attacked by a media so willing to pile on this suddenly not-so-cool kid without bothering to actually investigate the charges being made against him and, more importantly, by whom: When you're out of "the club," the cool kids have already decided you must be guilty as charged because that sounds about right.

As noted by U.S. Right to Know (USRTK), a non-profit organization advocating for more openness in the food industry, recent hit pieces against Dr. Mehmet Oz, host of a popular daytime television program that often focuses on bogus conventional health treatments and alternative medicine choices, were perpetrated willingly by a mainstream media too trusting of "establishment" medical sources, most likely because Dr. Oz doesn't toe the cool club line.

As USRTK noted in a press release about the Dr. Oz criticism:

The 55-point headline in Slate blares, "Letter from Prominent Doctors Implies Columbia Should Fire Dr. Oz for Being a Quack." The story by Ben Mathis-Lilly is based on a letter by a group of doctors who want Columbia University to relieve Dr. Oz of his position as vice chair of the department of surgery at Columbia College of Physicians and Surgeons.

"Dr. Oz has repeatedly shown disdain for science and for evidence-based medicine, as well as baseless and relentless opposition to the genetic engineering of food crops," says the letter, which was sent soon after Dr. Oz aired a show about glyphosate, the herbicide associated with most genetically engineered crops that was recently designated as a probable human carcinogen by the World Health Organization.

The complaint to Columbia was signed by Dr. Henry I. Miller and nine colleagues, "all of whom are distinguished physicians," the letter claims.

But are they really? As Dr. Bob Arnot, the chief medical correspondent for NBC News, noted during an appearance on CNN following the release of the letter, the attack against Dr. Oz appeared to be generated by the "doctors" more beholden to the GMO industry:

[T]he most interesting part of this is this letter. First of all, it's not from the Columbia faculty. It's from ten physicians, all of whom have industry ties. And if you look carefully at the letter, what it's really about is that the industry is furious that he has taken on genetically modified crops. So you basically have industry henchmen who are after Dr. Oz here. One of them in fact, head of the American Council on Science and Health, spent some time in federal prison for Medicaid fraud, so I'd be very careful about who has written this letter. [emphases added]

USRTK has the skinny on the entire list of ten "impartial" doctors here.

The point is, the mainstream media -- always out to protect its PC credentials -- leapt on this story without first investigating it properly because it "fit" a pre-conceived "cool kid club" narrative, namely, that anyone who dares question the safety of genetically modified anything is a "quack" whose reputation has to be destroyed.

Now, on to the next racially motivated riot and "investigation" into what is affecting the "human condition."