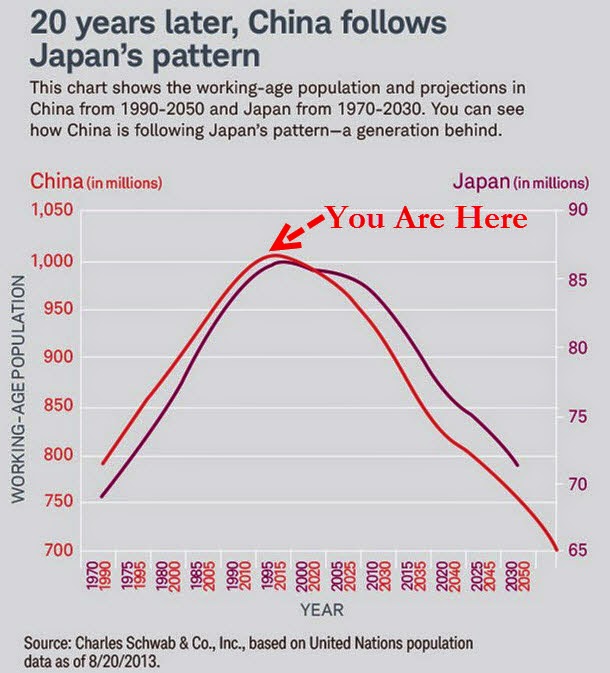 Oh finally.  Someone has actually run the numbers properly and came up with the exact same answer I came up with and posted on around a year ago.  Quite simply, China's population will be cut in half inside the next two generations or easily within the lifetimes of most of you.   Like Japan, it will be much richer but bit will be smaller.

I did not have the raw data but it is not hard to understand that this must happen with the one child policy.  They are only now backing off that plan.  After all the population collapse will only continue if they do not.

I am more surprised that no one has  spoken up sooner.  The only thing that can change this downward trajectory is a dramatic extension in lifespans.  The problem with that far too many of the population has taken poor care of themselves and are now poor candidates.  It may still may work out enough to delay the trend somewhat, but however we dance, China's population is dropping now and it is affecting the working population most.  After all if you have made it to retirement, you have actually taken care of yourself.

At the same time India's population will hit twice that and will make Chinese adventurism unthinkable although they lack any such enthusiasm anyway.

China’s economy is slowing, and the debate is raging over whether the country is headed for an abrupt hard landing or whether the slowdown will stabilize into a soft landing that may already be underway. However it plays out, Schwab's Jeff Kleintop notes, one thing is clear: A return to the double-digit growth rates of years past seems unlikely. Demographics are destiny.. and China faces two unstoppable trajectories.

China’s rise largely stemmed from a surplus of laborers willing to work for lower wages than the competition overseas. This allowed Chinese factories to turn out goods more cheaply than was possible elsewhere. 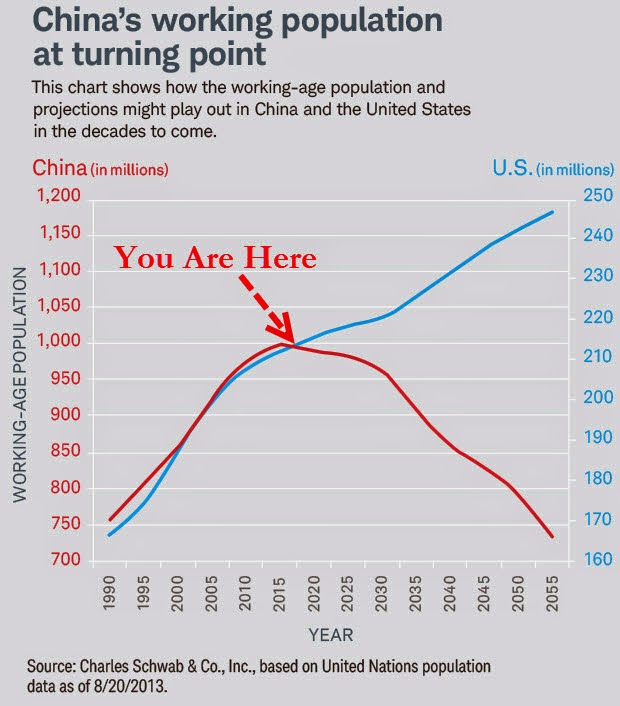 China isn’t the first country rise using this model. In the 1970s and 1980s, Japan relied on low-cost, export-driven economic growth to elevate itself to the second-largest economy in the world. However, Japan eventually had to change gears as the country’s birthrate declined and the number of workers fell.

China now faces a similar trajectory, as seen in the chart above. Its working-age population—defined as those between ages 15 and 64—is peaking and is set to decline in the years ahead.

China’s demographic problem has been exacerbated by the country’s “one-child” policy—a system introduced in the late 1970s that prohibits many couples from having more than one child. Although the policy has recently been relaxed slightly, according to the Chinese agency charged with population planning, the one-child policy has prevented more than 400 million births since 1979.

To put that number in perspective, the entire U.S. labor force amounts to about 150 million workers. You can see how demographic trends in those two countries might play out in the chart above.
*  *  *
That's a big demographic hole to fill with QE-lite...
Posted by arclein at 12:00 AM