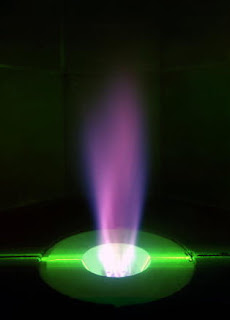 I am posting this as a reminder about how far away we remain from effective hydrogen storage and its curious step sister called the hydrogen highway. Any such method will be still born except for special tasks because the hydrogen here is tied to a large massive molecule adding a massive surcharge to transportability and actual fabrication.

The only way around it has been to use hydrocarbons were the carbon is also burned for a small energy contribution. It is still the hydrogen that has fueled the modern era.

One can make it better by using methane which consists of one carbon atom and four hydrogen atoms. Reforming can provide a pure hydrogen feed.

An even better molecule is hydrazine which is one nitrogen atom and three hydrogen atoms. Technically, it has been handled and produced in nitrogen plants over the years. It was used as rocket fuel and even in German U boats.

Unfortunately it is simply way too dangerous and the cost of managing that danger is high.

So coming in with a molecule consisting of metals and the like is miles away from a transportation solution.

Besides, we have now many alternatives to this putative technology for transportation and the likely advent of long range electrics will make all this work moot.

To use hydrogen as a clean energy source, some engineers want to pack hydrogen into a larger molecule, rather than compressing the gas into a tank. A gas flows easily out of a tank, but getting hydrogen out of a molecule requires a catylst. Now, researchers reveal new details about one such catalyst. The results are a step toward designing catalysts for use in hydrogen energy applications such as fuel cells.
Scientists from the Department of Energy's Pacific Northwest National Laboratory combined experimental and theoretical studies to identify the characteristics of the catalyst, a cluster of rhodium, boron and other atoms. The catalyst chemically reacts with ammonia borane, a molecule that stores hydrogen densely, to release the hydrogen as a gas. Their results, which reveal many molecular details of this catalytic reaction, appear August 5 in the Journal of the American
Chemical Society.
"These studies tell us what is the hardest part of the chemical reaction," said PNNL chemist and study author Roger Rousseau. "If we can find a way to change the hard part, that is, make it easier to release the hydrogen, then we can improve this catalyst."
Molecular TankResearchers and engineers are trying to create a hydrogen fuel system that stores hydrogen safely and
discharges hydrogen easily, which can then be used in fuel cells or other applications.
One way to achieve such a fuel system is by "storing" hydrogen as part of a larger molecule. The molecule that contains hydrogen atoms, in this case ammonia borane, serves as a sort of structural support. The catalyst plucks the hydrogen from the ammonia borane as needed to run the device.
The PNNL chemists in the Institute for Interfacial Catalysis study a rhodium-based catalyst that performs this job fairly well, but might have potential for improvement. Their initial work showed that the catalyst worked as a molecule that contained a core of four rhodium atoms in a tetrahedron, or a triangular pyramid, with each corner decorated with boron and other elements. But the rhodium and other atoms could line up in dozens of configurations in the molecule.
That wasn't enough information for design improvements - the team wanted to know which of the multitude of structures was the real catalyst, as well as how the atoms worked together to remove the hydrogen from ammonia borane. To find out, the researchers had to combine experimental work with theoretical work, because neither method was sufficient on its own.
Bustling Borane BusterFirst, the team followed the catalyst-ammonia borane reaction with several technologies. One of the most important is an uncommon technique known as operando XAFS, which allowed them to take X-ray snapshots of the catalyst in action. Most researchers examine a catalyst's structure when the catalyst is at a standstill, but that is like trying to figure out how an athlete performs by watching him sleep.
Additional
To put the puzzle together, the team used computer models to construct a theoretical molecular configuration that accounted for all the data. These computationally challenging models were calculated on computers at the National Energy Research Scientific Computing Center at Lawrence Berkeley National Laboratory in Berkeley, Calif.
The computer model produced a structure that best incorporated the experimental data. To test whether this structure worked properly, the team performed a computer simulation of an operando XAFS analysis of that catalytic structure reacting with ammonia borane. Then they compared the simulated data with real data gathered about the catalyst. The two sets of data matched very well, suggesting the structure they had come up with was very close to reality.
The chemical nature of the structure, along with additional experimental data, allowed the team to outline the chemical reaction occurring between the catalyst and the ammonia borane. The catalyst does not remain still, said Rousseau, making it a good catalyst but, like an active two-year old, also a difficult subject to pin down.
Plucking Atoms One at a TimeThe results suggested that the active catalyst picks off hydrogen from a particular spot on the ammonia borane molecule: a nitrogen atom in the molecule holding onto two hydrogen atoms. First, the catalyst plucks one hydrogen atom off. This is the hardest part of the reaction, said Rousseau, and it makes the bond between the remaining hydrogen and boron unstable. So the molecule spits off the second hydrogen as well, and the two hydrogen atoms form molecular hydrogen, or H2 which is released as a gas and can be used in engines or fuel cells.
Additional details remain to be drawn out by the team, said Rousseau, but this study makes a big dent in what they need to know to design a good, inexpensive catalyst.
Rousseau added that the research benefitted from being based at PNNL. "An important part about this work is that we have these kinds of DOE teams where we can start with experiments and go to theory and back again. We get a lot more information this way than doing either one alone."
Posted by arclein at 12:21 AM