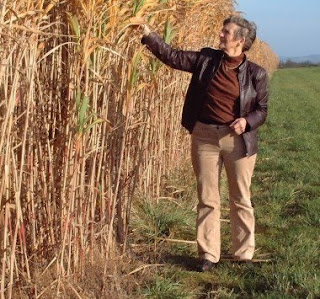 This probably makes it the single most promising crop base for simple biomass production.

It needs the tropics and it certainly needs water. However, it also seems to prosper is a range of difficult soils.

I would like to know if it will naturally dehydrate prior to harvest, since any form of drying adds a lot of cost and effort.

Otherwise we may have a viable silage source and a crop that stands up for several years of harvesting. If it can be used on fairly lousy tropical soils were cattle raising is already underway, then it is a major improvement,

I also notice on the power point presentation on the Viaspace website, that this grass is been fed exclusively to grass carp in China. That is also promising. We have been talking about wetland crops like cattails. Adding in grass carp to the wetlands and feeding them with this particular grass adds another revenue stream to the property.

They quote 175 tons per acre of wet tonnage which likely approaches the produced tonnage for cattail starch and reed biomass. It is certainly enough to optimize any technology around.

Anyway, we can add this to our list of prospective feed stocks for cellulosic ethanol production.

VIASPACE has announced that an independent analysis of Giant King Grass as an energy crop by the China National Center for Quality Supervision and Test of Coal confirmed that Giant King Grass has an energy content of 18.4 MJ per dry kilogram (4402 kcal per kilogram), which makes it suitable as a renewable feedstock for generating electric power and producing liquid biofuels.

A well-known energy company, at present unnamed due to ongoing business discussions with VIASPACE, commissioned the independent analysis, and based on the results has declared Giant King Grass suitable for its
renewable energy requirements.

Kukkonen added: "Giant King Grass can be burned directly in an electricity generating power plant as a full or partial replacement for coal. Giant King Grass can also be used to make liquid biofuels, such as cellulosic
ethanol, and green gasoline, which are collectively known as grassoline, and it can be used to feed cows, sheep, pigs, poultry and fish. VIASPACE is in discussions with several potential customers and partners, and is pursuing new opportunities worldwide."

In addition to the energy content, the analysis provided data on moisture, volatile matter, sulfur, carbon, hydrogen, nitrogen, oxygen and chlorine, as well as the composition of the ash.

Best in tropical and subtropical areas.

4 or more harvests per year possible

Originally developed as feed for cows, sheep, pigs, fowl and fishSuitable as fresh grass, silage or dried and processed into meal
Posted by arclein at 12:05 AM