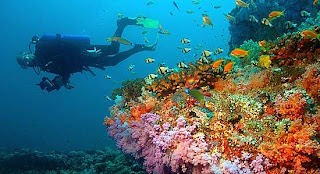 As yesterday’s item made clear, the cultural information provided by Prithvi is showing us that a lot was going on in the Indian Ocean when the crust shifted eleven and a half thousands of years ago or so. So I cranked up Google Ocean to see what we now know about the subsea of this ocean. Most of this is fairly recent and was not available before.

I quickly discovered that I did not need any subsidence in the theory at all. We have a submerged mountain and island chain comparable to Japan in scale and extending along the Western coast of India and south into the Indian Ocean. The key larger islands begin just south of India and run several hundreds of miles. That part also is closely sub parallel to an apparent oceanic trench like Japan. The Maldives are part of this chain.

Merely lowering the sea level back to Ice age levels would reveal this land mass. It is also noteworthy that massive coral structures have also grown that appear to be miles wide and extending the full length of the chain. Subsidence added into this mix would certainly create the initial conditions and a rising sea would keep up the building process.

Put another way, Japan would notice a rise of three hundred feet, but the bulk of the topography would still appear intact. A subsidence of two to three thousand feet which also induced any volcanic stacks to also collapse would produce a wreckage pile mostly close to the surface. A rising sea would then encourage a huge build out of corals.

Therefore, we can state that mere sea level rise is insufficient to reduce an obvious mountain chain and that a violent subsidence surely can.

This chain bears the same relationship to India as does Japan to China. That means that it is impossible for appropriate cultural information to not exist even long after a disappearance. Prithvi has shaken it out for us.

I am also aware of legends covering the Gobi and the Himalayas that will now need to be sourced and revisited. This was a very busy part of the world for the several days in which the crustal movement took place.

It is also obvious that the crustal movement would have activated the contact and faults associated with the apparent trench along its entire length. This would certainly explain the reports of mountains visibly moving and also appearing to fall over into the ocean. This would have been quite visible from the mainland as there are many apparent submerged volcanoes close along the coast.

In short, we have found ample and surprising evidence supporting the plausibility of the reported observations. The evidence is much better than expectation. It also begins to answer the question of Mt Meru.

This was a huge mountain that was unique to this region and a center of religious veneration. For huge, we only need to think of Mt Fuji and its many sisters. Like Fuji, it is no trick to collapse these very weak stacks. Its image and idea has passed down to us over millennia. The only remaining question is exact location on the chain and whether is also blew up during the primary event. I think it likely should have blown up. So we should be looking for an active crater underwater.

We have three clear nearby population centers prior to the Pleistocene Nonconformity. There is the Indian subcontinent, there is the Japan like Maldives island belt, and we also have the huge Indonesian plains. All were positioned in the tropics where habitable land existed. The ice age made organized habitation impossible outside this fairly narrow belt.

There are plenty more things to run down in the cultural records of India and plausible explanations to follow up from this. We have already learned a lot about the imparted velocity of the crustal movement and we have discovered a true submerged and significant land mass. We did this by simply looking with eyes informed by understanding the significance of the crustal shift.
Posted by arclein at 12:21 AM